Liveblogged notes from a fascinating Keynote track session on developing new tools - and the human today as the centre of interfaces. The mid-afternoon Keynote track focused on the emerging Maker culture: a group of people hacking new things from a combination of the physical and digital in what is, right now, largely a hobbyist culture. What really struck me about this session – especially Kate Hartman’s session (see below) – was how much of this reminds me of the Homebrew Computer Club of the 1970s – a bunch of hobbyists and academics who gathered together to share an enthusiasm for emerging technology – and who ended up birthing technology and companies that changed the world. 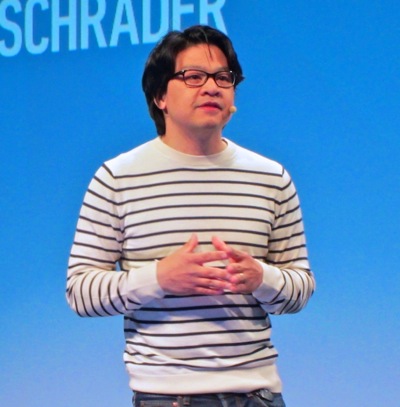 Jeremy Abbett introduced the session by suggesting that, if you want to see the future, see how childhood has changed. Children hack things – at least in his household. He’s interested in promoting the idea of less consumption and more recycling and reusing of things.

“We need to create tools that make it easier for kids – and others – to make it easier to talk to machines.” We’ve gone from the hackable computer to the blackbox phones which it’s impossible for the beginner to easily modify or develop. Breadboards, prototyping boards and open source software are an easier route into discovering programming. Open Frameworks and Arduino are other examples.

“The “hello world” of Arduino is getting an LED blinking. Everyone should experience this.”

We need to get our hands dirty to understand where the internet of things is going, he suggested. A maker is someone who tinkers with things. 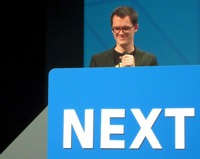 Kyle McDonald moved the discussion onto the possibilities opened up by questioning the world through making.

Two techniques interest him: 3D Scanning and Face Tracking. When he graduated from college, he started experimenting with 3D Scanning. All you needed was a camera, a projector and some special software. Turned out to be harder than he expected. But eventually got to the point where he was making some great still scans. And eventually moved to 60fps of scanning. He put out the tools, and people started using them for dance festivals screens, music videos and the like. The Microsoft Kinect is essentially a 3D Scanner disguised as a gaming peripheral.

He’s a big fan of using Open Frameworks and other free tools to open up devices to more creative uses – all the art than’s been created using hacked Kinects, for example… The early hackers had to reverse engineer the product, but Microsoft eventually got on board and released drivers.

You can do amazing things by hooking up a Kinect as the scanner and a DSLR for image capture to create motion-capture, image-shifted video.

Oh, and one important tip. If you want to avoid being recognised by face recognition software – tip your head at 15 degrees… 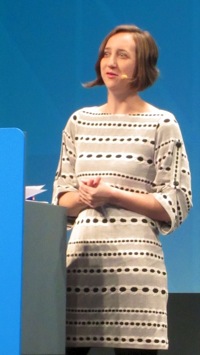 Kate Hartman moved us onto wearable wireless clothing and body-centric hardware. How can the things we wear interact with the world around us?

And she gave some off the wall examples, like a glacier embracing suit – an interface between the human body and glacial ice.

More useful is Botanicalls – plants that make calls to let you know their state of health.  They started with the phone, and then moved to Twitter. And her plant ended up with over 3,000 followers – more than she has. Renegade tools become design objects, and end up in galleries…

Why bodies matter – really simple. Everybody’s got one. It’s the primary interface for the world, and they’re all very different. When you’re working to create different interactions, it’s a great place to start and work outwards.

Her students have experimented with a whole range of clothing/body/technology interfaces –  felting electronics into masks for performance; social prosthetics; and a pleated skirt where the pleats can be individually addressed and lit.

The Toronto Wearables Meetup sounds like incredibly inspiring place – and was what brought the Homebrew Computer Club comparison to my mind. It feels like people playing with incredible technology in a hobbyist way way that will one day change the way we think about technology…

Kate suggests that part of this is about fear and power. Some people feel intimidated and over-whelmed by the changes happening in technology. And that bugs her, because people miss out on the benefits. Students drop her courses because they’re intimidated by technology. They need a sense of agency in the tools they use. Anything that opens up technology to allow people to have input is great. Also, porosity – the technologies are pliable are more interesting to here, because people have the ability to access them.

A fascinating glimpse into the future.