Four talks from the Fashion track, exploring the future of fashion: designed and sold online, printed and equipped with micro-sensors… The first session from the Fashion track, curated by Anitra Eggler 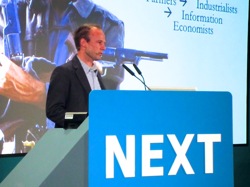 About 10 years ago, the fashion industry thought that maybe no more of 5% of fashion retail would go online. People would still want to go to shops. And so Fashion United stayed a B2B fashion portal, not a shop. They would have made more money as a shop.

Wo, what happened over 10 years? Fasion hit 6% of online sales! Zara looks almost exactly the same as it did 10 years ago.

In 2013 20 new companies like asos and Yoox.com will have in aggregate more turnover than the entire Dutch fashion industry. E-commerce is just at the beginning of its cycle – there’s a prediction that online sales will hit 40% by 2020.

How did this happen? pioneers came, as they did in the Wild West. They had a strategy and fought for their land. They’re building brands and relationships with their customers. Fashion is like TV: 80% of people just want what they’re being given.

Existing brands like Burberry, H&M and Victoria’s Secret as seeing incredible growth on Facebook and Twitter – but what are the results? Threadless are a genuine social fashion company, and are making a lot of money. They crowd-source their designs. In April they had 250 design submitted and 1.18 million votes by 22,407 people.

The question people have to resolve: what is your niche? 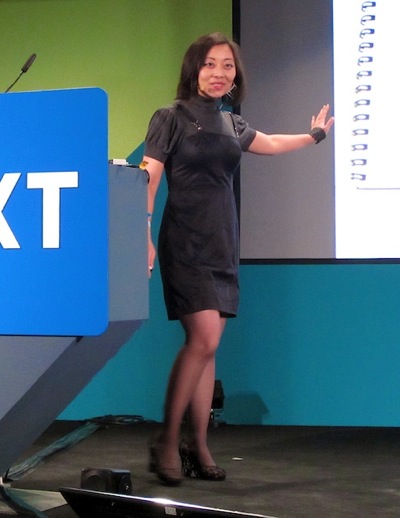 Fashion is fantasy versus reality. The fantasy is Cinderalla’s gown. The reality is sewing. And sewing hasn’t really changed that much in 100 years. In the 1950s Nylon was the future of fashion. And it is again. Now it’s a powder – you can make clothes out of dust. So where do you start? A bikini. Why? Not much material needed – 3D printing is still expensive – but also because it uses the waterproof qualities of the material, and is a construction challenge. The result is flexible with a structure. It’s made of computation textiles. 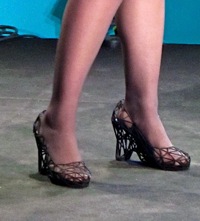 They’ve also built jewellery – it’s something they can wear around, but which lacks the same structural challenges. So they moved on to shoes. And she’s wearing them now.

The future of fashion isn’t about a style. They make “future looking” stuff, but that’s just their thing. The future is about process. 3D gives them both process and a supply chain behind it.

Data is the new black. Nike makes a great job of collecting data and making it relevant. Mary’s company can let you choose the heel height you want on each design.

So, where next? Dresses? There’s always been the tradition of people making their own clothes – sewing a dress is very different from buying it, even if it looks the same. But the ability to customise design, materials, styles and have them printed creates something in the middle.

Alois Ferscha from Johannes Keppler Universität Linz gave a challenging presentation about how miniaturisation has opened up the possibility of smart clothing. For example: glasses enhances with sensor technology – geoposition, and wireless interet, enabled by minutised technology. Coupled with a device worn on the arm, which holds much of the commuting function, they could be one way of creating a location and product aware information stream for people at all times. 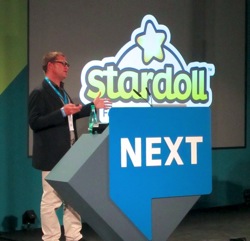 Has digital media changed the way teens create, design and market their dreams?  Some users register on the site, and within a week have a collection and music on the site, which they’re sharing with the world. The average age is 15 – they’ve got their whole future ahead of them. A combination of independence, community and rapid feedback are what makes the site so popular. Tavi Gevinson – an Anna Wintour for the post-digital generation – made her name through bogging as a teenager, and is a good example of how teenagers view design and fashion. She don’t need mainstream media backing – she has the backing of the social web.

People’s ability to sell designs on Stardoll have created Stardollar millionaires. It’s just virtual currency right now, so if they’re not the designers of tomorrow, they’re certainly the entrepreneurs and marketers of the future.