Towards the Internet of Things 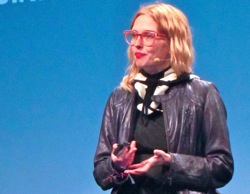 People love photographs. The view of the web is changing – from photos illustrating the words, to videos and photos being the web, with text supporting them. interactivity around images is growing on the web. Tagging gear photos with links to webshops, allowing people to buy the kit. It’s a trend in fashion, too with clothes collages. Or tagging plants in a woodland photos.

Some music-related images are getting click through rates of 83%. “It’s about the curation” says Ulla. Just the existence of an image isn’t enough, you have to work on what goes in it. On mobile, touch is the new click. By seeing what people touch, agencies can richer information  about what people are interested in. 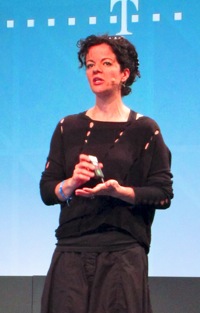 Alice has been working on the idea playspace that happens both physically and digitally, inspired by two books, The Real Toy Story and Makers. A long time ago she built an avatar builder – and she started wondering how we could fabricate new toys. She saw that the physical toy world was unconnected from the digital world.

Figureprints – a company taking virtual world avatars (like World of Warcraft characters) and making statues of them was an early example of linking the two. But these are statues not action figures.

The only difference between an action figure and a doll is knee and elbow joints… They can ride bikes, but dolls can’t. AmericanGirl allows a little customisation.

Making toys is really, really hard. Just a mould will cost you $100,000 –  because it needs to withstand millions of injections of plastic.  AmericanGirl gets around that by just making lots of variations on the same basic set of components. 3D printing gets around all of that.

If you look on Etsy, you’ll find many people customising toys.

Joints are hard – because the 3D prints are built over time in thin layers they wear down in use. Clothes can be made locally, but isn’t necessarily cheap. You need to put the legwork in to find the suppliers.

They want the toys to be hackable – and open up the possibility of permanently connected play toys. 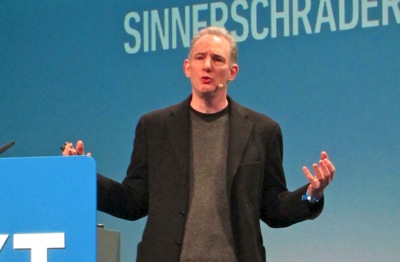 When people talk about the internet of things, they think about machines talking to machines. The thing that interests them at EVRYTHNG is the relationship between these machines and people. Toyota have produced a hybrid car that can communicate with you, to tell you when the engine needs charging, or that the tyres were flat. It’s a machine with its own presence on the internet, and a relationship with its owner.

This future is already here. Smartphones are giant sensors in our pockets. Over half the population in some European countries now have smartphones. Inanimate objects can connect to the phones, which becomes the receivers that then listen to the devices, and communicate their messages.

They use the metaphor of Facebook: while we’re sitting in the conference, there’s an avatar of us in the cloud, doing things while we’re busy elsewhere. Their software engine gives every physical thing its own presence on the internet, without being always connected. Updates are triggered when people interact with them via smartphones.

For example, a guitar. Generally, your relationship with the vendor ends when the guitar is built. But if you scan a barcode on it, you activate a digital identity, linking it to you. It becomes your guitar, and all sorts of information, offers and connections can be made instantly. And the analytics that flow from them are fascinating. They help companies do this out of the box – “product relationship management”.

Once you give products digital identities, it’s very easy to mashup products and services on top of them. 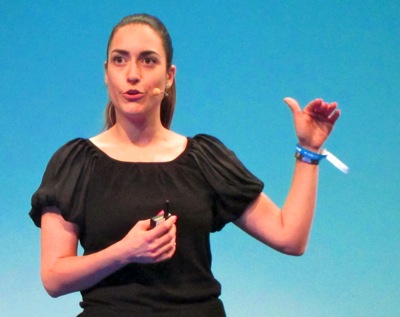 Lisa gave us an eye-opening talk on the state of 3D printing technology. She gave examples of projects working at the scale of buildings – and others operating down to 4 microns. “This technology has advanced so much that it’s no longer just for hobbyists. It’s used for high end luxury products and engineering components,” she pointed out.

And it can scale down to runs of one. There aren’t really economies of scale – so we can use it to optimise and customise. You can use it to build the packaging as well as the product – and to personalise the product.

And this turns many of the pre-conceptions about manufacture on its head. The role of both mass production and the individual craftsman is thrown into question, and the software behind each item that is “printed” allows both repeated production and individual alteration of every object. Things can be scanned from life and duplicated exactly. And the materials that 3D printers can work with are evolving all the time.

It is, in short, a hugely disruptive technology whose potential we’re only just starting to realise.