Coming NEXT: cool things from around the web

From miniature 3D self-portraits to a static bike that charges your iPhone - five new ideas from around the web. Spoon & Tamago reports on a new twist on the 3D Printing boom – a self-portrait booth. A 3D Printing booth in Japan replaces those strips of photographs with miniature 3D printed replicas of yourself (above) – but you have to book your appointment in advance.

The Internet of cute things

ToyTalk, a company founded by former Pixar CEO Oren Jacob, has landed $11.5m in a second round of funding. It’s product? An artificially, internet-connected teddy bear. Cute and smart. Bound to be a winner.

The internet of caffeinated things 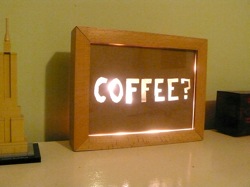 The doomed internet of things

Just to counter all this internet of things excitement, John Horn takes a look at the two things that could doom the internet of things. And by “doom”, he means “slow down”. But still, who would have guessed that 2G phone networks were still so important?

Fancy charging your smartphone on the streets of New York City? Get peddling. Healthy, environmentally friendly, and good exercise. The Kickstarte rproject has a way to go before it’s funded, though.