Why is there no photo archive for the web?

It's hard to give away photos on the web in a future-proofed fashion. Why is no-one pushing for a historic web, for the benefit of future generations? Perhaps some of the reason for the web’s fragility is that so much of it is rooted in the now. It’s not good at thinking about endings or death. I lost my Mum to cancer back in 2008. She was a classic “silver surfer”, with accounts on various services across the web. Closing them down was a long, drawn-out task, because most services didn’t have any process for it. Facebook, at least, has the ability to memorialise an account. In most cases, the only way to resolve the situation was to close the account, and let her presence fade from the web.

Nearly five years on, some aspects of the web’s rooting in the now still bother me. My Mum was a keen photographer, and I have images of hers stretching back to the 1950s. The picture above is her in the 60s. Many are the standard sort of family snaps that are of no interest to anyone but us – but she also has some great images of places and people right across the decades. It would pain my Mum to think they were all sitting, largely unused, in albums, or files on my computer. Surely I could share them easily in some way that would allow historians, bloggers, researchers and anyone else who might find use or pleasure in Mum’s work somewhere on the net? Yet, there doesn’t see to be a simple answer to this one.

I find it baffling that in the age of big data, of increasing sophistication of image matching algorithms and the like, that there isn’t anyone actively trying to build a huge database of photos of this sort that can be donated for the public good. There’s no need to be selective – the resources needed to store donations are getting less and less onerous, and as algorithms get better and have larger data sets to work from, poor metadata will slowly be addressed. Google would seem like an obvious candidate – but Picasa tops out at 1Gb per uploader.

So, I find myself at an impasse – images to gift to the world, but no clear way of doing it.

The web lacks a sense of history. In all its constant, busy, franc updating, it’s leaving our past behind, when it could be a valuable tool for collecting it. There’s a hunger for old imagery – look at the popularity of the posts on Age of Uncertainty, which feature old photos left behind in books. Is no one out there addressing this? 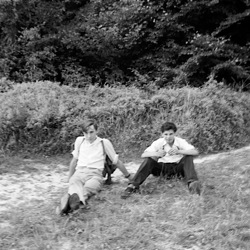