When is a hack not a hack? Jeff Jarvis and the BBC’s technopanic

Jeff Jarvis had a run-in with the BBC over the recent Facebook hacking - is it an issue worthy of discussion? The really interesting thing about journalism professor Jeff Jarvis as a commentator is that he’s more apt to dismiss the idea of dragons than warn us about them. A man who has been so open about his own physiological problems in the aftermath of surgery for cancer, who wrote a book that advocated greater publicness, is not one to warn “here be dragons”.

It’s not a surprise, then that he didn’t react well when invited by the British publicly-funded broadcaster, the BBC, to appear on a news bulletin talking about the dangers of Facebook being hacked…

Where’s the damage? Where’s the story? You are engaging in a technopanic, I complained. Media does this too often, jumping on the latest problem to warn of the danger of this technology rather than doing enough stories on the wonders and opportunities of this new technology

There’s certainly something uncomfortable about seeing the words “Facebook Hacked” splashed across the screen of the BBC broadcast: 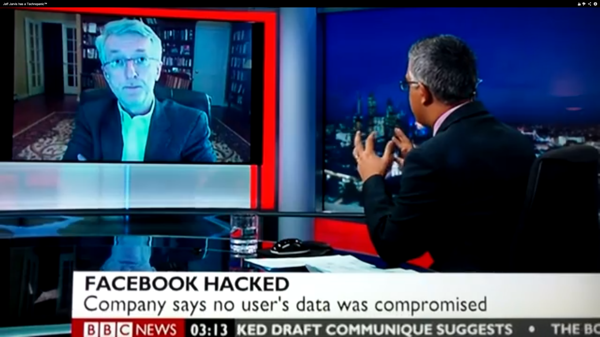 As far as we’re aware, the site wasn’t hacked. Facebook itself wasn’t compromised – just some malware left on the computers of employees. It’s justifiable to say that Facebook the company was hacked, but not Facebook the site. That distinction isn’t clearly made.

Ciaran Norris, currently chief digital officer at Mindshare Australia, but posting on his personal blog, took issue with Jarvis’s approach. This was a subject worthing talking about:

After all, it’s one of a large number of hacking stories recently, suggesting that we should all be considering what data we share with companies, and what sort of security systems they use to protect it. Add to that the fact that Facebook holds data, on over 1 billion people, that could easily be used by cyber-criminals (birth-dates, names of friends, family & spouses – all things that are regularly used in online banking) and it seems reasonable to at least consider the implications.

That seems like a reasonable position, too. Hackers are making a determined attempt to access key social sharing sites – you should be thinking about the possible consequences.

The fault line between the two positions lies in that confusion in the reporting – the BBC, based on the clip on Jeff’s Google+ page, were not making any distinction between laptops being infected with malware, and the hackers actually getting access to data within the Facebook website.By blurring the lines – intentionally, or through non-specialist reporters failing to do their research – the BBC was certainly guilty of sensationalising a story.

But was Jeff guilty of being too dismissive of real fears? If nothing else, it was a warning that, if you engage with the mainstream media over technology issues, well, here be dragons…