With iOS8 Apple brought family-sharing to its stores. And Amazon has announced Family Library. Are digital goods finally becoming shareable? Yesterday was an interesting day for those who like digital media, but also like sharing their digital media.

Family Sharing is a new way to bring harmony to your family’s digital life. Up to six people in your family can share purchases from iTunes, iBooks and the App Store without sharing accounts. Pay for family purchases with the same credit card and approve kids’ spending from a parent’s device. Easily share photos, a family calendar and more to help keep everyone connected.

Finally, the bodges solution I was using to allow my wife to access out long-merged iTunes library and shared iBooks can be replaced with this clean, simple but inherently limited approach. For too long the whole digital media industry looked like it was built by single 20-somethings, with plenty of disposable income, and resident family to share media with. Those of us a little older, and a little more family-orientated, found ourselves battling with restrictions that didn’t facilitate the way we live.

But Apple aren’t the only company heading down this route…

Buried under the avalanche of device updates was the news that Amazon announced both some new Kindle hardware, and new software coming in the near future.

One feature of the software changes was the announcement of Family Library:

Want to share ebooks with your close relatives but don’t want to let them have access to your account? Then you’ll like this. I don’t have many details on it yet, but Amazon says that it will enable readers to access not only their own Kindle books, but also books from the Amazon account of a partner or relative. I don’t know about you but I can’t wait to try it; I can finally get my mom off of my account.

Well, according to the limited information Amazon gave, in the form of an image, that’s not quite how it works: 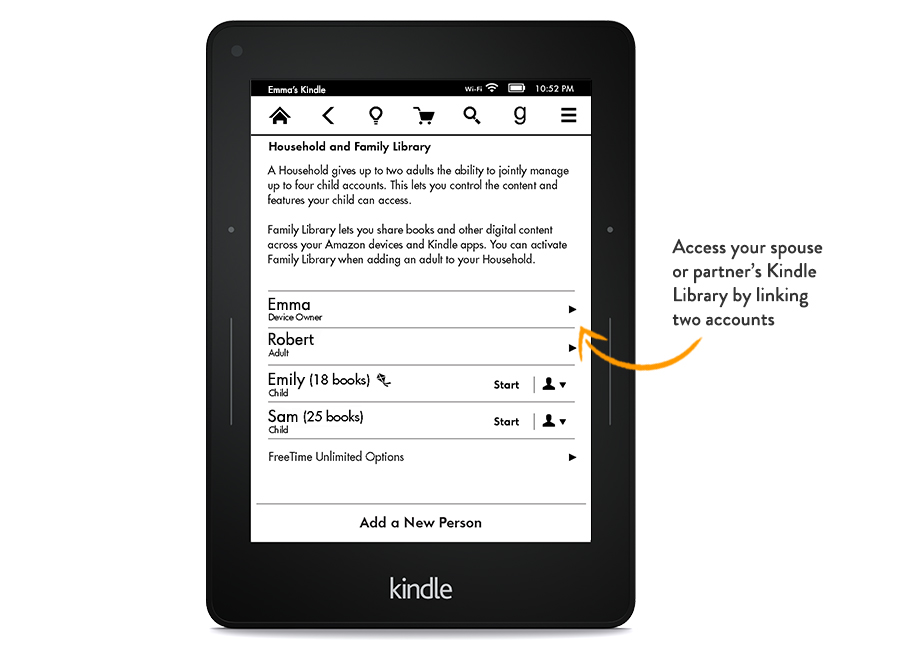 Mind, you – limiting it to four children seems rather arbitrary. I know larger families than that. And Apple has similar restrictions:

To get started, one adult in your household — the family organiser — invites up to five additional family members and agrees to pay for any iTunes, iBooks and App Store purchases they initiate while part of the family group.

This has been far too long coming. For all their advantages, digital media forms have lacked one basic ability inherent to physical media. If I finish a book, and I think my wife would enjoy it, I can hand it over to her. The same is not true of digital media – unless we were willing to share an account, and that bring all forms of syncing problems with it.

This creation of a “family” concept within digital media is a first step in the right direction. It provides both control and sharing within a family unit. But it leaves problems unanswered. What, for example, if, when my daughter grows up and starts her own family, she wants to take media I bought with her? She can’t. Her new family unit will be starting over with only the media bought in her name.

Equally, what about divorce? Are we now splitting the digital media as we were once the physical media? Can children be in the family groups of two separated parents? Not as these service stand, no.

Equally, the simple act of lending a book to my (grown-up, with a family of his own) brother, or my mother-in-law, doesn’t work within these systems.

We’re in the foothills of this. But the fact that two such big players have started exploring ways of bringing sharing into the equation makes me hope that we start to see digital media take on many of the qualities rights management has stopped it having – until now.