Getting a new tech idea over the innovation gap can be hard. Compare a 3D printed dream, with a retail reality… It’s often said that great ideas are common, but implementation is hard. Right now, it feels like the tech world is going out of its way to prove that true. This is a classic example of a bleeding-edge video, one looking at the potential of a technology:

It’s exciting, interesting – and not in the remotest bit practical. Great fun to look at, but not particularly useful in giving you a clear steer on what the future will look like.

This, on the other hand, is the future of fashion happening now: 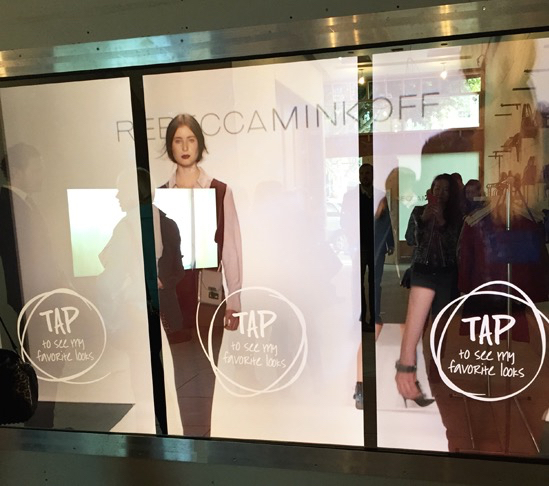 Once you enter the dressing room, you’ll see the items you bring in appear on the mirror which is actually another large touch screen. Each item of clothing or accessories is equipped with a RIFD on the price tag which is read by sensors when you enter the room. On the mirror, you’ll be able to change the lighting from day, night, to club. Need another size? No need to yell out for a sales associate. Just tap the mirror and you’ll be able to contact someone to bring you another size or piece of clothing. You can even request a glass of bubbly!

Here we see tech starting to solve a problem that people actually have – namely, trying on clothes that aren’t the sorts of lighting environment they’ll end up wearing them in. And when you’re buying for looks rather than practicality, as you’re likely to be at the Rebecca Minkoff Boutique in San Fransisco, that’s an important consideration.

These sorts of digital mirrors are being pushed in a number of places. One platform – Memory Mirror rom MemoMi – is rolling out into the upscale Neiman Marcus department store chain: 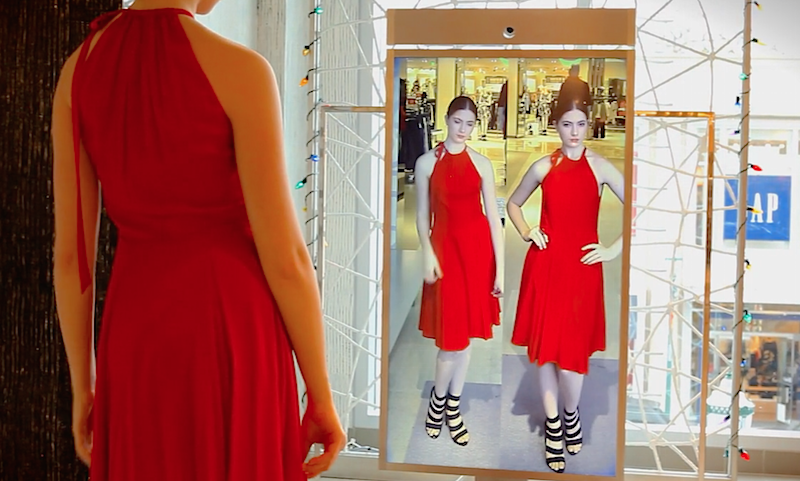 The mirror captures your outfits, allowing you to compare – and share – various looks.

These are both high(ish)-fashion, high end installations – but if the technology proves reliable and useful, then we can expect to see variations on it starting to work their way down the price ladders to more affordable outlets. That path is well-known. That’s not the tricky bit.

The challenge with business innovation is not rolling out a useful product, it’s about going from blue-sky concepts, like that dress at the top of the post, to commercial products, like the last two. That’s the most difficult gap to bridge, and where so many ideas stumble.

We have a humber of technologies that seem to be struggling over that gap right now, as I suggested last week – the Internet of Things, for example, and wearables, to some degree. What successes will this year bring – and to which companies?