curved.de – The ‘Michelin Guide’ for the mobile generation - has rethought mobile phone marketing. Here's some best practice from the successful content marketing site. An iPod. A phone. An internet mobile communicator.

Eight years ago Apple’s founder presented his invention to the world. The gadget would influence the culture of the 21st century like no other, and pave the way for the triumph of the smartphone.
Within the past few years our usage habits have changed fundamentally – away from the desk, and over to the smartphone or tablet.

“Mobile first” is being increasingly replaced by “mobile only”, especially among the young generation. Mobile has won out. But what does this younger revolution mean for telecommunications and mobile phone providers, who connect millions of customers around the world with their networks?

Above all, it means a complete rethink. The telephony and SMS business model is the stuff of yesterday. In the near future it is data volume which will make up the lion’s share of revenue. But how and where can (potential) customers be reached most efficiently?

This is something which E-Plus, for example (now number one in the German mobile phone market following its merger with O2) has to address. In this broadly saturated market, the key is to develop points of differentiation. Traditional TV and print advertising have long been able to reach the target market – but only do so marginally and for a short time-span. The internet would appear to be the natural way to go. With banner advertising and initiatives to acquire new customers through online and social media seemingly exhausted, CURVED creates a new route. 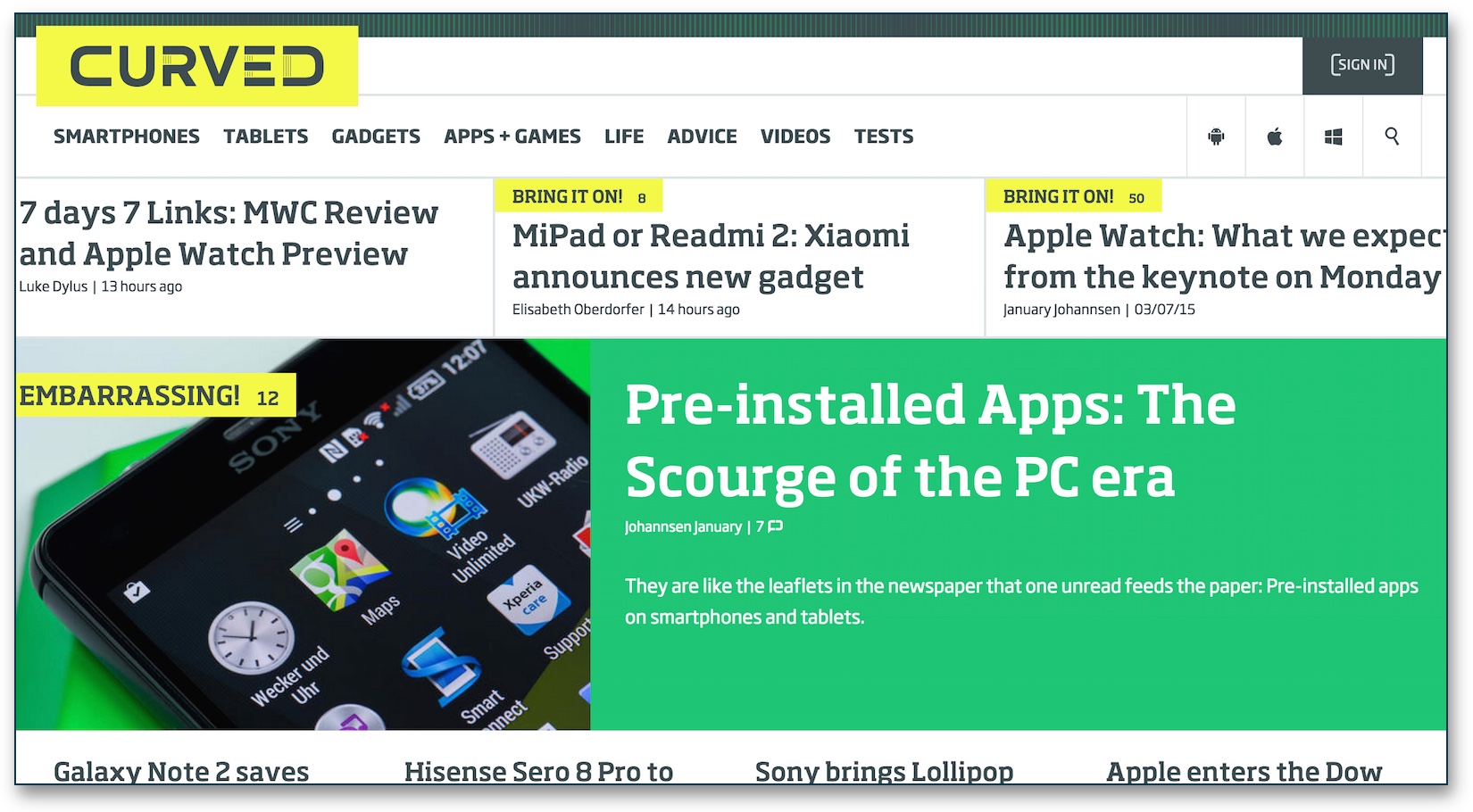 On behalf of the E-Plus Group, SinnerSchrader launched the CURVED platform at the beginning of 2014 – providing the Generation Touch with a tech portal for the mobile era, something which had been previously lacking. CURVED reports on the human side of the mobile revolution, telling us what the gadgets are doing for our lives, how they are making our everyday easier and driving social progress.

The concept draws on a successful 100-year-old recipe: content marketing. John Deere, the American agricultural machinery manufacturer, has been talking to its customers in The Furrow magazine since 1895. Another fine example of successful content marketing comes from 1900: the Michelin Guide. The brainchild of tyre manufacturer michelin, the restaurant guide has long given motorists good reasons to go that extra mile – and to use more tyres, thus contributing to increased sales in the process.

Since the very beginning, the success of this model is based on two pillars: the quality of the content itself and the integrity achieved by separating the brand from that content.

More than a century later, CURVED is adapting this principle for the digital age. The editorial team, made up of experienced tech journalists, offers smartphone users round-the-clock support and help, orientation, analysis, background pieces and advice. Over 25 new articles appear each day on the site, which reaches 1.3 million unique users per month. Independent editorial content – which, from a quality perspective, is journalistically the match of any traditional media title – is the foundation of this sustained growth.

The rapid rise in reach has been possible due to a steep learning curve and constant monitoring of the traffic generated per article. SEO experts help to priorise subjects and keywords and ensure the website is optimised technically for Google. Visibility on Google is a critical determinant of success, as being on the Google News Index leads to an explosion in traffic. Presence on organic search delivers sustained traffic for CURVED, even for older articles.

So what direct benefits does E-Plus draw from CURVED?

Leads generated by content enjoy better conversion in our shops than do leads from advertising.

That;s the case, according to Jürgen Rösger, who, as Chief Digital Officer (CDO) at E-Plus, supervised the introduction of CURVED. In other words, the more often a page is read, the higher the conversion rate. The articles concerned are linked to appropriate products in the shop, with additional banners – and advertorials including offers – developed specifically for readers of CURVED.

CURVED’s success formula can serve as a blueprint for other sectors: why let manager magazin or Rolling Stone do what a bank or music portal with suitable product links can do just as well?

Nils Jacobsen is a financial and tech journalist with 15 years of experience. Apart from being the editor-in-chief for CURVED, he writes among others for the media portal MEEDIA and Yahoo.