The new MacBook: lessons in brutal simplicity and utility

Apple surprised most people with the launch of the new MacBook - with only a single port. Is this a compelling vision of the wireless future, where computers are just another handy appliance? Probably the biggest surprise of the Apple event a fortnight ago is that the Apple Watch isn’t what everyone’s talking about. No, instead they’re talking about that most boring, familiar of things: the laptop computer.

The reasons for that could conceal a useful lesson about the future of technology – and of business.

Between evolution and revolution

It’s easy to forget that somewhere between revolutionary Apple events – like the iPhone or Watch launch – and the evolutionary updates to existing products, there lies a third category, where they fundamentally change the thinking behind a product.

These sorts of launches – of which the new MacBook is clearly one – aren’t about iterative change. They’re about looking outwards from technology, to the way people are actually starting to use it, and seeing how those changes could impact future computers. They’re neither evolutions or revolutions, but huge step-changes in a product’s life. They’re Apple’s vision of the future, a first draft of the next stage of computing.

The most notable of those was probably the iMac, with its brutal abandonment of legacy ports and floppy drives, and an early commitment (too early, probably) to most data being transferred by the internet. It was the “i” in “iMac”, after all. Then came the first MacBook Air – under-power and over-priced as it was – that envisaged smaller, lighter computing, sans CD-drive, and predicated around an SSD as the hard-drive. The tech was quite there yet, but the vision proved prescient.

So, the new MacBook. The single port new MacBook. Like its predecessors, it represents a very opinionated view of how we’ll used computers in the future. The majority of people will no longer spend much time connecting things to their computer. They’ll live in a wireless world, and data will move around wirelessly.

Apple has been building the connecting tissue for this sort of device for a very long time now. Here’s the building blocks they needed:

What do these changes do away with?

Computing for the rest of us

What does that leave? Well, for most users (and that word – “most” – is important, and we’ll come back to it), nothing. What else do they regularly hook up to their laptop?

I make my living, in one way or another, through my laptop, but it’s actually pretty rare that I connect anything to it. Most commonly, I hook it up to projectors or screens for talks and training sessions – but that’s only because so few places have wireless screens so far. I stick SD cards in the side from my “big” cameras”, and connect external hard-drives full of photos and videos. But I’m a Pro user – not the target market.

My wife? She has the projector use case, but that’s it. And these days she uses her iPad more than she does her iMac. She’s closer to the average use than I am, by a long margin.

If you’re thinking but “what about a graphics tablet” or ” I need a microphone” or something of that ilk – well, you’re not one of the group of “most” users, are you? Those are specialist use cases, and Apple will quite happily sell you a MacBook Pro to address those needs. Because if you’re the sort of person that frets about all those ports going away, you’re not the future.

Those with long enough memories will remember when people bemoaned the lack of ports on the iPhone and then the iPad. No removable storage. No USB. How could you possibly use this device? I would wager that the majority of the users of those devices have never even thought about it.

The only question I’ve ever been asked by family and friends (yes, I’m one of those people who get treated as tech support by their extended social circle) about connecting something to an iOS device was a week ago, when my daughter’s godmother asked about using her iPad to process her photos while she was abroad. Apple has an answer to that.

The unexpected merger of iOS and Macs 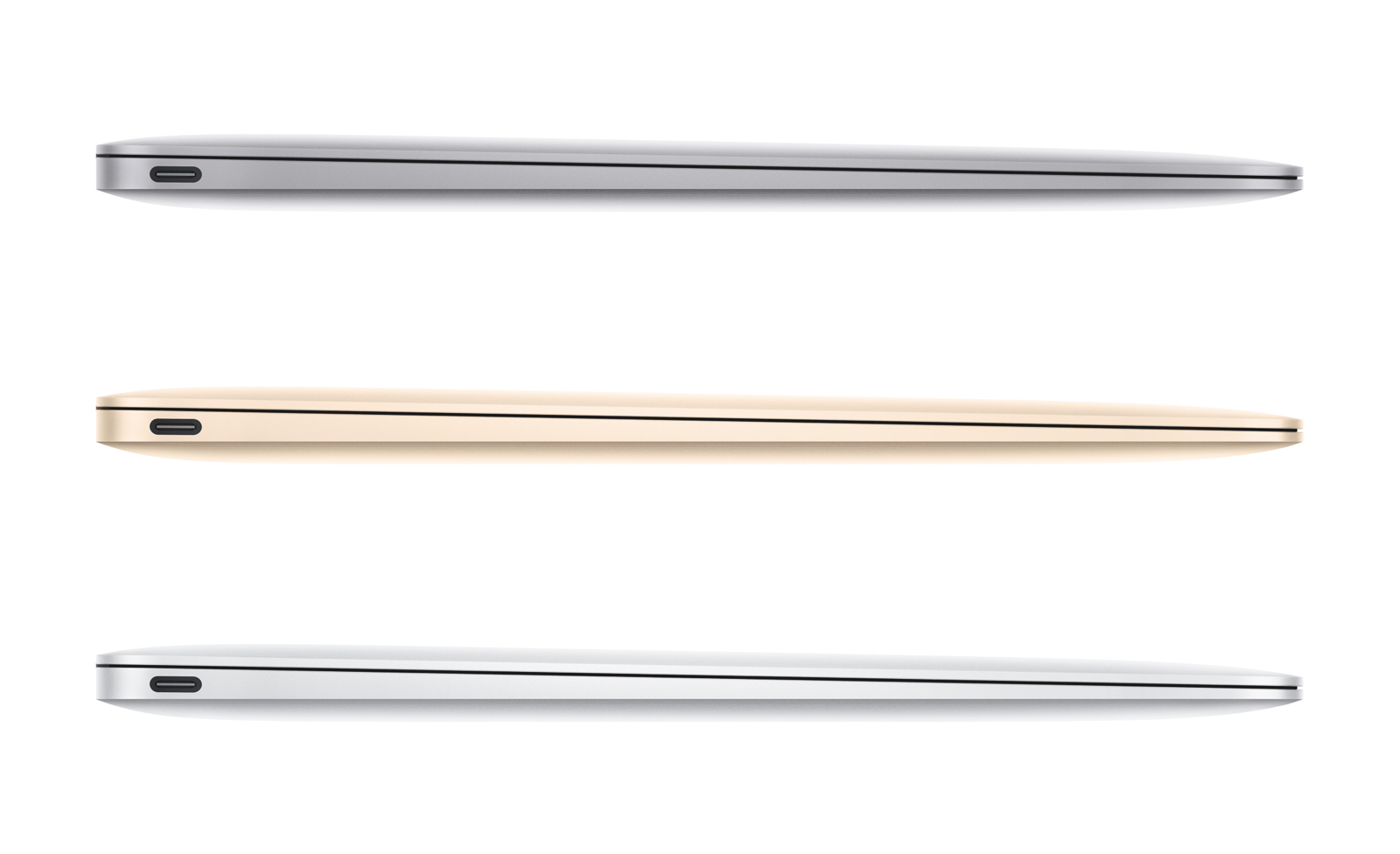 People have speculated on the merger of iOS and MacOS for a long time now. That’s not what Apple’s done here. Instead, Apple has taken the hardware concepts of iOS devices, and applied them to the MacBook. Think about it: what other devices come in a range of colours (including gold), have only one port, and are designed to be charged when they’re not in use, not while they’re in use?

This is the MacBook re-envisioned as a computing appliance for everyone – as simple and self-contained as an iPad. And like the iPad, it has just the one port, which you mainly use for charging it when you’re not using it. That’s probably why Apple feels comfortable doing away with the Magsafe connector – the problem it exists to solve shouldn’t exist with the user they envisage for this machine.

If you’re sitting at a desk all day with the MacBook plugged in, you should have bought a desktop, or a MacBook Pro. This is a light, simple and mobile laptop for people who are on the move.

It’s a compelling vision. But is it a realistic one?

The likely stumbling points are:

As always, the proof will be in the sales – especially as the fundamental design ethos of this machine spreads to more models, probably consuming and replacing the MacBook Air line as it does so. (If you’re holding out for a retina MacBook Air, I have bad news for you…)

What can we learn from Apple’s vision?

Here’s the true message of this design: what we know as a laptop today is going to become an edge case. The standard computing kit is going to be made up of standalone, self-contained devices you only rarely attach anything else to: a phone, a tablet, a laptop or a watch. The complexity that has great value to a few, and little utility to many, will be pushed into the pro level machines.

Now, forget Apple and hardware. Think about what that means for any digital experience. Are you building your products for a wireless era? For the era where people download apps from App Stores, not but and install them on disk? Where they don’t need to think about storage? Where simplicity and obviousness are the rule?

Because that’s what this represents – computing being radically simplified even as it grows ever more useful. That combination of usefulness and simplicity is an incredibly potent one. If Apple has it right with the MacBook, they’ll come to define a generation of laptops, as the MacBook Air did with the “ultrabooks”. Can you build your products in a way where users don’t have to think about crufty details like storage or connection? About where things live or how to move things around?

That’s exactly what consumers are being trained to expect. Are you up to that?