A weekend with Apple Watch

I've had Apple Watch for a weekend now. How useful is it proving to be - and what are its weaknesses? I was lucky enough (if “lucky” is the right word, given the amount of money I spent…) to take receipt of one of the first wave of Apple Watch deliveries on Friday. I’ve been playing Dad all weekend, so I haven’t really had time to really deeply investigate it, but here’s my impressions 48 (well, more like 56) hours in.

The Apple Watch is a beautiful object. It feels good on my wrist, and the sapphire screen on the Apple Watch collection makes it look distinctly jewellery-like. Based on my try-on experience, I think it’s fair to say that Apple Watch Sport is the most “tech device”-like of the collections, while the rest are escalating levels of fashion/jewellery intersection.

Battery life is better than I expected. As I write this, I’ve been wearing Watch for 15 hours today, and I have 45% battery life left: 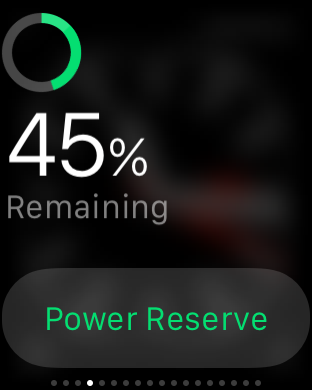 That’s better than I expected – and gives me confidence that I could use it more extensively than I do.

Voice recognition and Siri work really well. I’ve been pleasantly surprised how much I can actually do with the device just by talking at it. I can set reminders, create calendar appointments, and even choose music in the car, just by raising my wrist and saying “hey, Siri.” Luckily, Siri doesn’t understand my toddler’s voice was well – as she’s been trying to tell Watch to do things.

The activity tracking interface is awesome. It really encourages you to think about your activity, just by glancing at the phone. The three concentric rings make it really clear how you’re doing on the three main gaols: 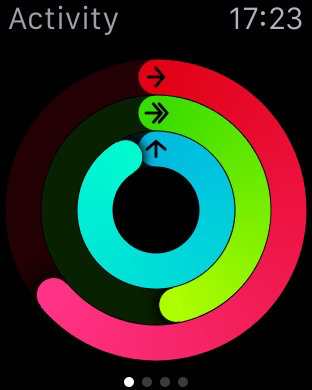 I’m achieving the first of those easily, getting pretty close on the calorie goal, but routinely fluffing the last of them. More work to be done in the week ahead.

This is the least intuitive Apple product I’ve used in years. What I can’t quite decide is if that’s a problem with the design, or because I have things to unlearn before I can really master it. I keep trying to us the watch like I would the iPhone – and it is a very different device. There’s much less touching of the screen, and much more use of the digital crown to scroll, and Siri to do things by voice.

I’m still discovering new things I can do by watching the intro videos.

The “raise your watch to turn it on” option is still a little pernickety. Too often I raise my wrist and am still confronted with a blank screen. In fact, the battery life management is generally very aggressive. The Watch sometimes goes blank when I’m mentally still using it. It’s probably the right decision – but they might end up easing up a little over time.

The software is clearly still buggy in places. I had to restart both my Watch and my AppleTV to get the remote app on the Watch working – but when I did, it worked great.

3rd party apps are not a great success right now. Some are just ill-conceived – who on earth at Twitter thought that people would want to see the latest trending terms on their wrist – but not their mentions? Baffling. Even those that are well-conceptualised are struggling to perform. They running on your iPhone, with the results being projected to your wrist – and the lag inherent in that process shows. I’m really hoping the announce native apps in the coming months.

I’m enjoying using Apple Watch. Its secrets are opening up to me progressively over time, and so its usefulness is growing each day. There are irritations – but they are minor. I’d certainly say this was a more polished first release than, say, the very first iPhone.

But the thing I’m enjoying most is that I’m using my phone much, much less. In our local child’s playground, there’s a picnic table that tends to be inhabited by mums and dads constantly staring at their phones. It was really pleasant to be really focused on my daughter, yet still be able to deal with a couple of messages quickly, without getting sucked into phone alley.

Equally, some addendum to our shopping list from my wife pinged onto my wrist while I was in the supermarket, shopping with our daughter. I’d almost certainly have missed them had they come to the phone – the the hepatic feedback – tapping – on the wrist made me look and take in what was needed. I suspect that this very direct messaging will be one of the main uses of Apple Watch – but at the moment I lack any friends with one to try some of the Watch-specific communication features with.

So far, I don’t regret buying it – but I can’t wholeheartedly recommend it – yet.