Be human, be thoughtful, be better – the themes of #NEXT15

The next wave of technological change is likely to be more profound than we expect - so we need to take responsibility for it. That was the message of NEXT15 Tech conferences can sometimes be little bubbles of unreality, stuck in conference centres far away from the reality of life. That was not an accusation you could level at NEXT15.

We were deep into reality, and that suited a conference that thought hard about the implications of technology on our lives very well indeed.

This is what happens when your digital festival mingles with a music one: #next15 pic.twitter.com/1B1dTrFtMU

How we will live 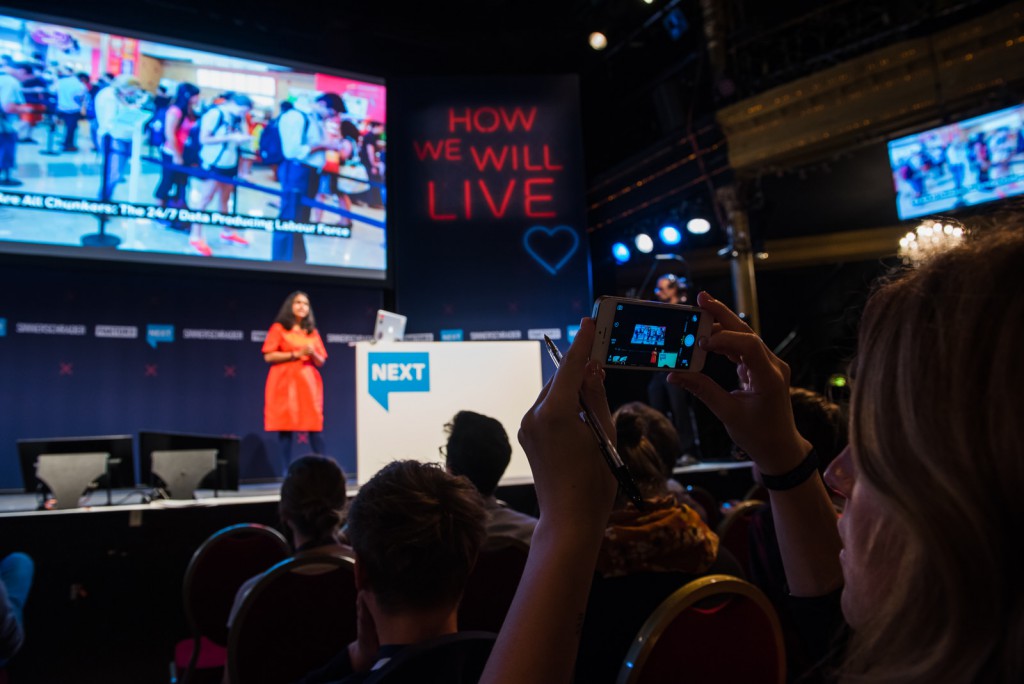 Day one opened with some deep insights into how technology will impact our lives. David Mattin gave us some vital clarity in his opening keynote, reminding us that trends only emerge when a new way is found of answering a fundamental human need. No need, no trend.

And then Anab Jain stepped it up a level, with an intensely personal talk, as her mentor’s death challenged her to think about the messages she might leave for her child. And the fundamental message of her talk was that technology changes are coming inevitably. It’s our responsibility to engage with these changes, and make sure they work for the good of humanity. And that’s a big challenge.

How we will move

Look out your window. There’s an excellent chance you can see a car, a road, or both. That’s how pervasive motor transport has become, how deeply ingrained it is in our lives.

What if all that changed? 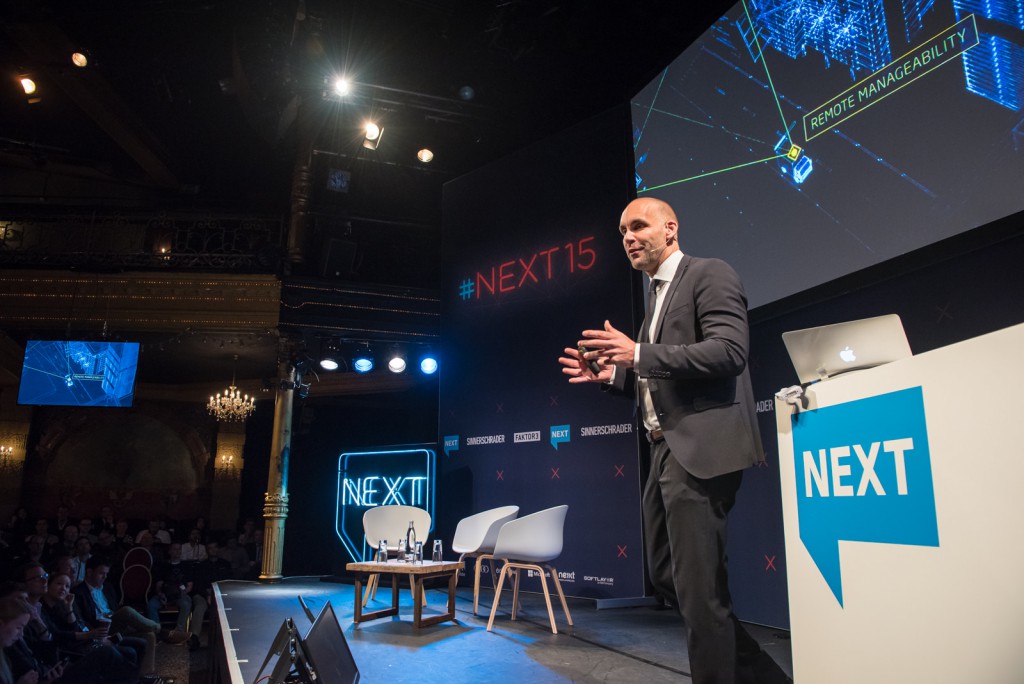 The next session picked up some themes from last year’s conference, by really looking deeply at the changes autonomous transport will bring to the world. The three speakers made two things very clear:

None of the speakers predicted anything as simple as straight replacement of driven cars with computer-piloted cars. Instead, they predicted a slow replacement of car onwership with on-demand or shared autonomous vehicles over the decades to come. And the implications of this spread far and wide. Nils Wollny of Audi was interested in the opportunities offered by the hour-a-day in a car where people no longer had to focus on driving – what services can we offer people there?

Richard van Hooijdonk explored what happens when both our bodies and cars become connected – and 80% of our parking and road space is freed up.

"my son who is 3 years old, will never know what a drivers license is" @rvhooijdonk #mobilityDistruption #next15 http://t.co/AKSWSUiiaS

And Rashik Parmar of IBM Softlayer explored the implications of car becoming big sensors on wheels, gathering ever more data as they drove.

Autonomous vehicles are about much more than just cars. And their implications will be much bigger.

How we will work 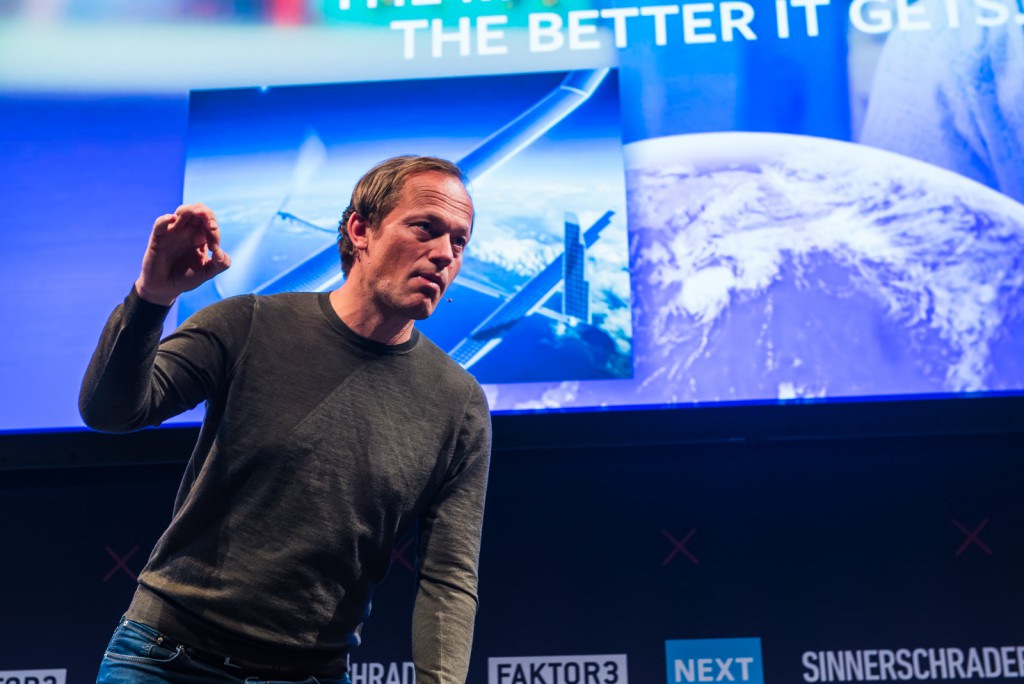 When I entered the workforce a little over two decades ago, not everyone in my office had a computer on the desk. All the journalists did – it was already essential to their jobs – but the sales teams didn’t. That seems unimaginable now. But again, the changes that technology brings might just be getting going for the workplace.

The plenary sessions of NEXT15  day one finished with two competing yet oddly compatible visions of the workplace of the future.

Yuri van Geest of the Singularity University talked about exponential organisations, the sorts of agile, flexible companies that can scale quickly in response to market opportunity, and become the unicorns of the future. Most of these are startups, but even existing businesses can become exponential – if they’re prepared to make some hard, uncomfortable changes.

"Disrupt yourself or die." #next15

By contrast, Tim Leberecht, the business romantic, argued for more surprise and romance in business – to make things slightly uncomfortable and difficult for the customer as well as delighting them. Mystery is at the heart of romance and, in an age of radical transparency, possibly even a competitive advantage.

lovely talk. let's not forget about romance and intimacy in our digital lives. keep the mystique. @timleberecht #next15 @nextconf

While these talks seemed in opposition at first glance – with Leberecht even making a disparaging comment about exponential organisations – they actually came from the same point: valuing the human over the systematic. Van Geest wanted to reject the tyranny of industrial-era hierarchies and organisation models, while Leberecht called for rejection of a purely algorithmic world. In that, they both echoed Jain: keep humanity at the heart of the technology discussion.

How we will shop

Laurent Haug of Anthemis & MKS explored how online and physical retail are starting to blend together into an ever-more seamless experience. The expansion of delivery options through drones and autonomous vehicles is just going to expand that. 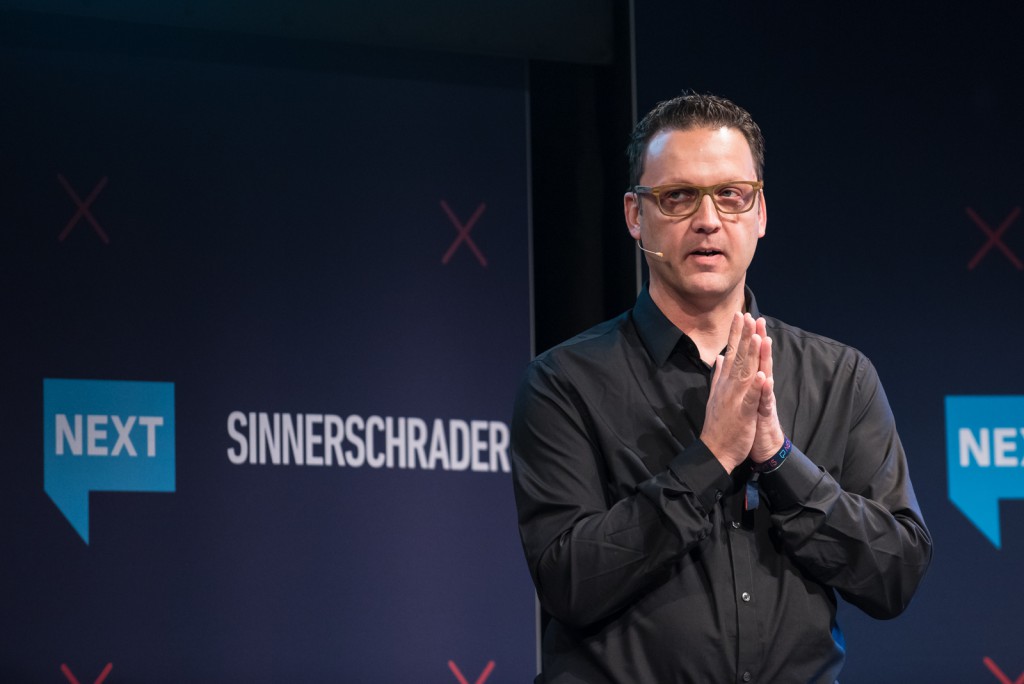 And then Scott Smith took that idea and pushed it even further. As our “data ghosts” – the representations of ourselves stored in the databases of major retailers – get ever more complex, will we see the rise of autonomous shopping? You’ll never run out of milk again, because you’ve delegated that to a system that not only buys the milk for you – it delivers it, too, to your home or a collection point on your commute home. Heck, your car might just run to the collection point by itself.

How we will make

Do we really just want to remake everything to connect it up? That was the question posed by the speakers in the How we will make section of the day. Every single speaker was a committed enthusiast for the internet of things – but like most early innovators in a field, have come away with some sober, useful lessons they shared with us.

For example, Alexandra Deschamps-Sonsino of Designswarm warned of the dangers of “object gluttony”, and focus on innovation where it really matters: health, pollution, care of the elderly. Our strongest power in a consumer society is in how we chose to spend our money. And by buying – and helping to crowdfund – devices that make life palpably better, we help solve the big problems, rather than just filling our lives with more toys.

Marcel Schouwenaar of The Incredible Machine extended that theme to the responsibility of the makers themselves to make ethical choices – and secure choices – when building their new products. A baby monitor that leaks footage to the internet is not a well-designed part of the internet of things.

There is no cloud. It’s just your stuff on another person’s computer. – @theincmac #NEXT15 #meow pic.twitter.com/OnOxWaxV6e

And Sami Niemelä of Nordkapp reinforced the point that by connecting things, we change them. And we can do as much good by connecting existing things as we do by making new things.

“Every single thing we design is political. Do not neglect the politics. What we leave out is as important as what we put in” @samin #next15

How we will play 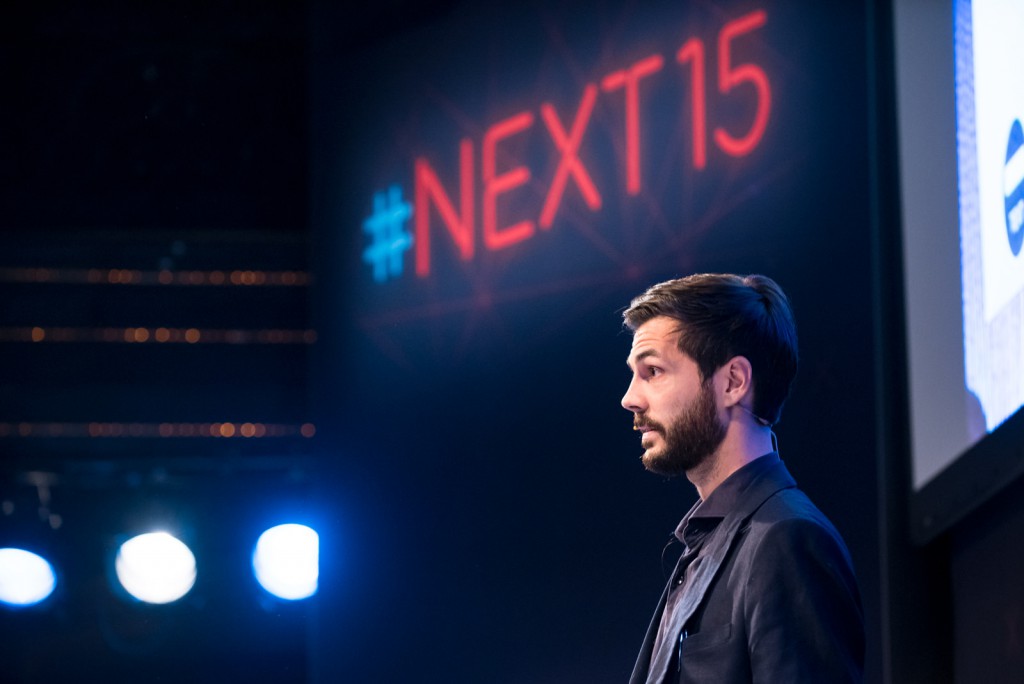 It seemed deeply appropriate that, as we all sat in a theatre, in the midst of Hamburg’s street of fun, that we finished the plenary sessions of the conference with a simple message: games are serious business. How did this manifest?

How Running gets more exiting… @adrianhon talking about Zombies, Run! #NEXT15 pic.twitter.com/FBpREpkOhf

Of course, there was more to NEXT15 than just the plenary sessions. The afternoon were full of break-out sessions around the Reeperbahn, with workshops in German and English that were often standing room only – if there was any room left at all.

#next15 Workshop presentations of amazing future products with @TheIncMac pic.twitter.com/LL8qpcp14V

We captured one – looking further into the future of retail in the age of Uber – but, as in any conference, or music festival, or even a sinful mile, sometimes you really have to be there.

The sensitive shower: Very cool outcomes from the "Invent a connected #product in 1h" workshop #NEXT15 @iotwatch pic.twitter.com/jYpr79wuGJ