[Liveblog] The future belongs to the exponential organisation

Yuri van Geest explains the characteristics of businesses built to exploit the changing economy around us. In three years your Apple Watch will diagnose cancer. The preliminary work has already been done. Self-healing using the brain is coming – then the placebo effect becomes the norm not the exception. Cancers are being reprogrammed back into normal tissue. We can 3D print anything – well, 350 materials. We’ll move from 3bn people online to 7bn in the next 10 years, as ways of accessing the internet proliferate.

We’re reaching the point where we can pinpoint things down to the molecular level from space. Sensors are getting cheaper and cheaper. Solar energy is plummeting in price. But it’s already outdated. We can generate energy from the air using nanotechnology.

Things are moving so fast that the half life of business competency has dropped from 30 years to five years. Things you learn in your first year at university can be dated by the time you leave.

How do we cope? Well, there’s the emergence of the exponential organisation, which become billion dollar companies in months to years. We’ve organised our businesses in linear fashions for 100 years. But the environment is changing so fast that that model needs to be replaced.

We’re moving from a *scarcity* economy to an *abundance* economy. That moves us from ownership to access. We’re entering a systemic transformation of business models. We’re not using 15 year old phones, are we? So why use century-old models of organisations?

A company needs a balance of growth and stabilising forces. Too far either side and you get chaos or inertia. To focus that you need an MTP: massive transformative purpose. That allows your customers and suppliers to engage with what you’re doing – and support it. 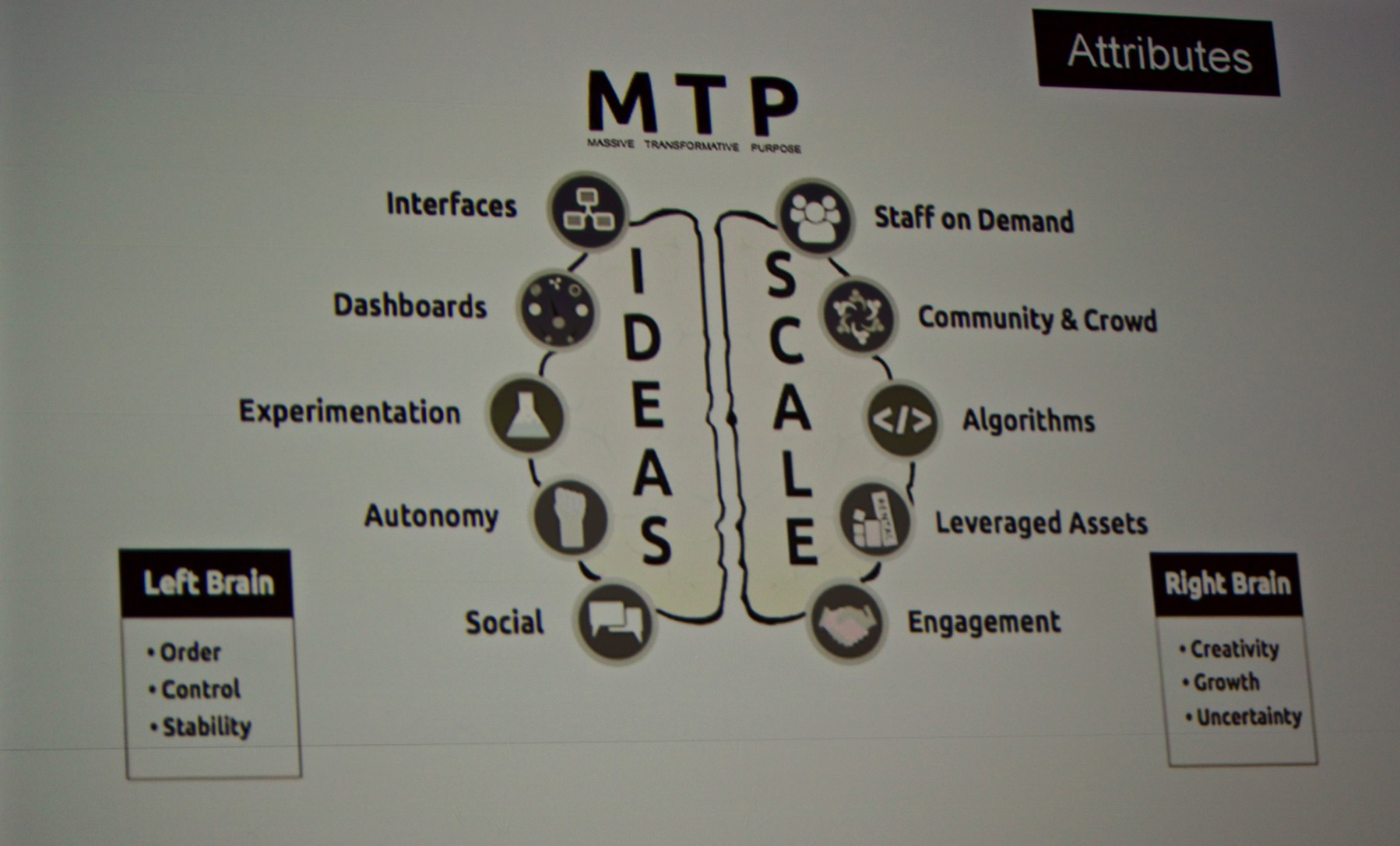 There are structural changes, too. You probably have fewer employees and more external engagement and partners.

Who are the top 100 exponential organisations? There’s a list online.

We will recruit differently – GitHub looks for curiosity in its recruits: passion, purpose and potential are more important than traditional CVs. Xiaomi works with its customers to design its new phones. They open themselves up to their community and stay agile.

Local Motors can produce a new car at a fraction of the price of a traditional manufacturer.

Haier took 80,000 employees and broke them up to 2,000 self-managed units with decision-making authority – startups, in effect. It transformed the business.

It’s an example of how an existing organisation can become exponential. But you need to change your leadership – and your leadership styles. It needs to be less top down and more open, vulnerable and honest. Then, you need to figure out how to disrupt yourself – how to cannibalise your won business. Classic corporate innovation doesn’t work, because you activate the corporate immune system and it destroys the idea.

Your create edge organisations, reporting to the C-suite, and leave them alone for five to 10 years. Don’t integrate. It’ll kill it. Better still, create back ops teams that seeks to disrupt the core business of the company.