Former Top Gear host Jeremy Clarkson fronts a new video for Amazon's drone delivery service - and proves that Amazon got more than a TV show for its money. Amazon has talked about its ambitions for drone delivery before. Well, it’s gone one step further and released footage – actual footage of a drone at work, not a CGI simulation, showing just how it might operate:

Amazon itself is clear that we are some years away from this going into operation. But the video suggests that the main challenge now is logistics and regulation, rather than the technology itself, which is well on the way to being mature enough to handle this kind of operation.

When will I be able to choose Prime Air as a delivery option?

We will deploy when and where we have the regulatory support needed to safely realize our vision. We’re excited about this technology and one day using it to deliver packages to customers around the world in 30 minutes or less.

Amazon is pushing for a “safe airspace” for drone at 400ft and below, with commercial aviation in traditional aircraft above that level. They’re still aiming at a delivery radius of 10 to 15 miles from an Amazon warehouse – which is like to restrict its use in rural areas. And the need for landing points might complicate things for many people in urban areas who lack outdoor space. But it’s going to be great for high-spending suburbanites.

If, that is, Amazon gets regulatory approval anywhere in the world…

The Amazon world according to Clarkson 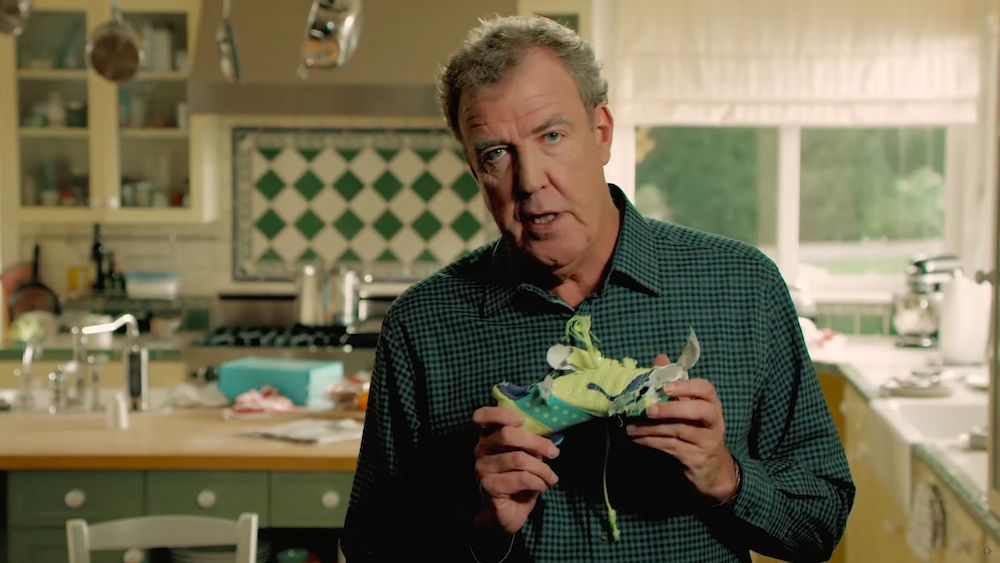 The other interesting aspect of the video is that it’s presented by former Top Gear star Jeremy Clarkson. He, along with co-presenters Richard Hammond and James may, were behind the internationally-successful motoring program, which drew in 350 million viewers worldwide. And then Clarkson had an altercation with one of his producers, and was fired from the show. His colleagues walked with him.

While the BBC are pushing ahead with new Top Gear with a new presenter, Clarkson and company have signed a deal with Amazon Prime Video to bring their new motoring show to the streaming service – and production is already underway:

And they’re getting TV show – and quite possibly a group of new subscribers – as recompense for that £160 million they’re paying the trio. But they’re also getting Clarkson and team as spokespeople, which might well pay for a lot of that value as well. Before this Prime Air video, there was another one, which traded off Clarkson’s recent troubles to advertise the Fire TV Stick:

Nothing like having a talented, mainstream TV star to start telling your company’s story for you…