From headphones to news feeds: we often don’t know what we want

Apple's shift to wireless audio has provoked outrage - but so did many other revolutionary changes in technology that we now take for granted. It seems to be a truism that people are pretty bad at judging what they’re going to like in tech. This week we’ve seen general howl of outrage over Apple removing the classic headphone jack from the new iPhone 7.

Every time @Apple removes some old-fashioned port, the whole world cries out loud.

I’m old enough to remember the howls of dismay when the original iMac removed the floppy drive, and a bunch of other legacy ports. That seemed to work out. 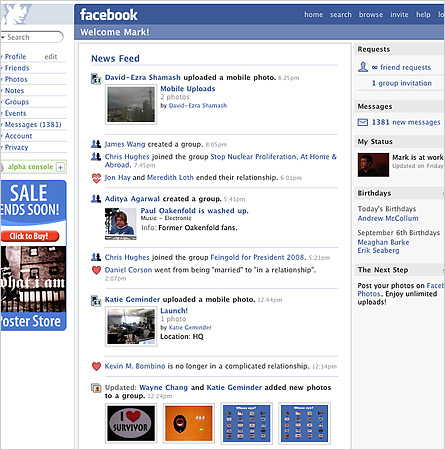 But an even more powerful example came 10 years ago, when Facebook introduced the News Feed. Yes, that’s right. For the first two years of its existence, Facebook didn’t have what most now consider to be Facebook – the feed. Instead, people interacted by writing on each other’s Walls. (And isn’t it odd to be thinking about things Facebook did a decade ago – new media is getting pretty old…)

The introduction did not go well. As chief product officer Chris Cox recalls:

We started rolling it out, and I think that Facebook had around 10 million people on it. We did it late at night because there was less load on the server. If you wanted to make changes, you would do it at midnight or 1 a.m. We flipped the switch and we were like, “Alright, let’s watch the feedback. Everyone is going to love it!” And we just watched the most vitriolic feedback: “Turn it off! This sucks!”

And, of course, Facebook stuck it out. And, to most of is, Facebook is the feed now. And for a subset of those people, the feed pretty much is the internet – it’s the front end for all they experience on the web.

Humanity, it seems, really isn’t good at realising what it will actually like and find useful. And it takes vision – on various levels – to moves forwards from our comfort zone. Most people don’t like change. Phil Schiller’s use of the word “courage” to describe Apple’s decision to kill the headphone jack has been much-mocked, but is possibly apposite. After all, Apple is clearly more committed to its vision of a wireless future than it is to keeping customers comfortable. That might well be hubris – but it does take courage as well.