China's real story isn't – yet – being told. China is not just a huge market - it's a huge engine of innovation that's coming our way. A panel discussion between:

Philipp Grefer: When I went to China for the first time in 2007, I thought it was backwards. Now, coming back to Germany feels like travelling back in time from the future.

Tricia Wang: I had no idea to extent to which Philipp was responsible for driving forward the music scene in China. You can’t just be the moderator of this!

PG: I went to do a PhD in the relationship between China and Latin America. I started going to music festivals, and the I was living there, and then I was running a music company. We manage a range of artists – some of them you will have heard of in the west. Gentrification starts with artists, and startups follow, so wherever we went with the bands, there were startups, so that’s how we got involved in technology.

TW: What are the biggest shifts you’ve seen?

PG: People are keen to come because it’s a huge market, but they don’t care yet about the music coming from there. China is all about soft power – so that will mean more and more cultural stiff coming that way.

TW: I see it the other way around – western culture has had a huge role in opening up in China. Western media has done a really good job in exporting it out. We’re exporting freedom and democracy and our ideology. People are sceptical about that from China, because of our perception of its politics.

PG: 88Rising is a YouTube channel looking for good Asian culture – better than K-Pop. They have found several people who have had some success. We have a Chinese rapper starting to be noticed in the US. The government is interested as well. They are actively supporting bands. One of out bands will be playing in Ann Arbour with support from the Confucius Institute.

TW: I think we still have some time to go before we see Chinese cultural influence. But technology is a different matter. That’s where I see the most traction. 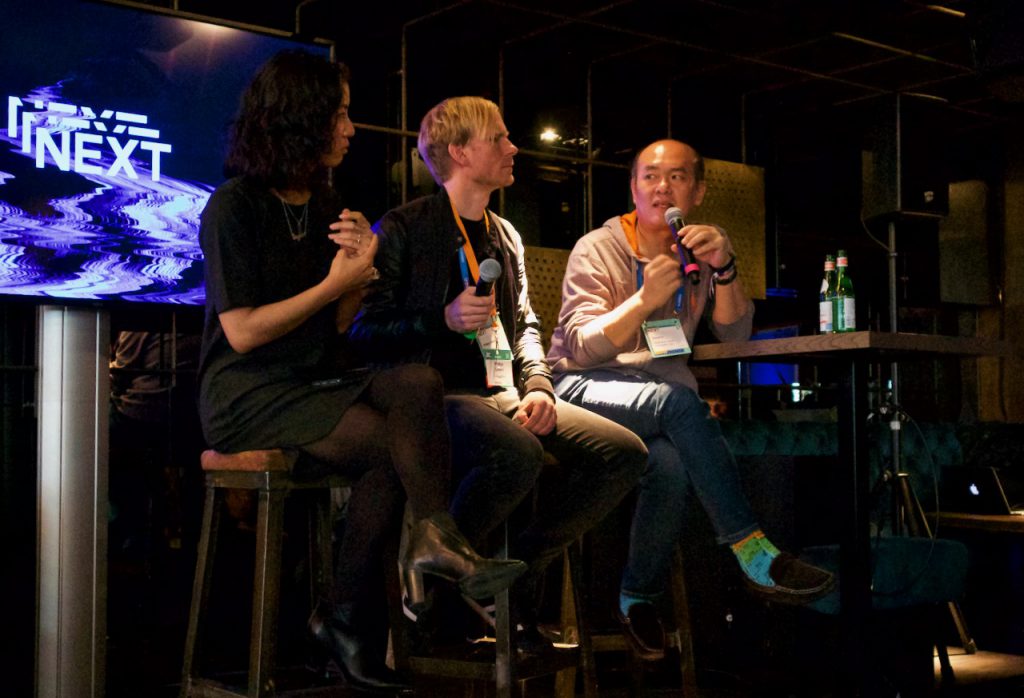 David Li: We’re seeing Huawai growing in the European market, obviously, but the other side is how tight the technological co-operation already. A lot of people come to conferences like this, and are surprised by the discovery of Shenzhen. Tim Cook started dealing with Shenzhen 25 years ago. It was people like that that helped build Shenzhen into an international power. Don’t believe what you read on the internet. It’s all males with Silicon Valley idealism, failing because it’s a different culture.

Next time you fly to Shenzhen, look in business class, and find someone your Dad’s age, and ask them how to work with Shenzhen. Go in with respect. Don’t think you’re the first from your country.

Right now the internet is all about “being cool”. A friend of mine followed my advice, and interviews three people from business class in the airport – and the story got killed by the editor. He was told that a story with nothing going wrong wasn’t a story.

TW: I’m told so often that journalists have pitched stories that get turned down because it doesn’t fit into the preconceived idea of what China is.

DL: People are happy to cheer for digital democracy when it’s happening in other countries – the Arab Spring – but not so much when it happens to them: Brexit, Trump. We’re beginning to frame everything in 140 characters, and that’s dangerous. All people see is that “Chinese internet is censorship”.

Instead, compare a Chinese farmer and a German farmer – and ask them what the internet has done for them or their business lately? All the Chinese internet companies are trying to get into the last rural areas.

TW: Western countries use government interference as an excuse for failure. We don’t hear the stories of what a good job that the Chinese companies are doing that make it hard for Silicon Valley arrogance to succeed. Google failed China because it never produced anything that was useful to Chinese people.

DL: China was closed for 50 years. All incoming bands are newcomers, not established rands with reputations.

TW: People get annoyed when you try to pay with cash.

PG: Of course, the Chinese government knows everything I but – or write.

TW: China is just more transparent about spying than other countries: look at the Snowdon revelations about the US. You don’t have to be in China to be oppressed. The coded language of the oppressed finds its way into the arts, and then into culture. That’s the same all over the world. I’m a big proponent for protecting spaces for anonymity, like Snapchat.

PG: They just don’t care about anything that’s not too big in China, because the scale is so big. One of the reasons that the government is so hardline is that China has a history of little sparks going out of control.

DL: Chinese consumers are the toughest in the world. They don’t care about brand. Look at dual-lens cameras. It’s top end in the west. It’s mainstream in China. We’re moving to an interesting cycle where the west is the last to have things, not the first.

The growth of the Chinese car industry

TW: I went to China for Nokia in 2008 to research the trends there, and I came back with a problem. “They don’t want to buy your shitty low end featurephones any more. They want smartphones.” Nokia was shocked. People saw smartphones as a symbol of upwards mobility. And now Nokia doesn’t exits in that form anyway.

PG: Nokia was arrogant – and that might be a problem for the German car companies. They sell shitloads of cars in China. China will want to do that itself – and they’re going electric. And then they’ll start exporting them. That could be a problem for Germany.

DL: There are 459 car brands in China. They all have licences to put cars on the street. Remember how furious the European car industry competition used to be. A Shenzhen for cars is developing: Chongqing (amongst other places). Chinese companies are pragmatic – they’ll target your weakest markets first, and grow for there.

There are electric cars coming onto the market for €1000. Are they street legal? No-one cares. They’s in the second and third tier cities, where they’re replacing bikes.

Talking of bikes, the bike sharing schemes are starting to trigger urban planners to rethink how they design cities. That’s not the story you hear in western media. China doesn’t work in the planned linear manner that the west do – they only bother regulating things when they become successful. Chinese politicians are the ultimate design thinkers.

What two transformational trends do you see coming out of China?

TW: David already mentioned one of them: automobiles. I’m really excited to see how people use the internet and create spaces for anonymity. We have the illusion of privacy, so we haven’t explored this as much. We have plenty to learn from people in authoritarian countries, and how they navigate this.

PG: What would happen if everyone could understand Chinese? In a few years technology might allow that – and that would open up the black box of China.

DL: Watch Jack Ma and what he does with Alibaba. And look at the initiative to build railroads – right now trains come from Chongqing to Germany full – and go back empty. That could change. No tweeting, no blockchains, no AI. Just putting stuff in the carriage going the other direction. That will be part of China’s impact.

TW: I’m really interested in how China will push forward generative design. An algorithm helps you come up with thousands or millions of possibilities, and the designer decides which ones to focus on. This changes the future of design – of everything! That’s not how designers are being educated right now.

It’s crazy to see what is happening.