In Search of a Culprit

In 2018, it seems to be common sense that some things in our (digital) world are out of control. What's less clear is who or what is responsible for the mess, not to mention how to fix it. In 2018, it seems to be common sense that some things in our (digital) world are out of control. What’s less clear is who or what is responsible for the mess, not to mention how to fix it. At SXSW last year, the tech scene was still under shock after the Trump election. This year, the overall tone is pretty sober.

It’s worth noting that a technologist like Tim O’Reilly now blames neoliberal capitalism for the many wrongs of technology. Less Milton Friedman, more John Maynard Keynes could be his motto. He cites statistics about stagnating real median family incomes vs. rising productivity to prove his point.

In his view, it’s more our financial system that is to be held accountable than technology as such, or tech companies in particular. They operate under the conditions set by the capital markets, and thus we have to redesign these markets, he concludes. This at least is worth considering, though it draws attention away from the responsibility of tech companies and their leadership.

Of course, Tim remains as optimistic about technology as ever, and it’s hard to condemn him for that. But he refrains from worshipping tech and rather sees it as a tool that can be used in different ways. It’s on us to decide how we use it, and we are responsible for that.

Tim O’Reilly uses the term technology in a rather narrow meaning, thus excluding the broader technological, financial and social systems that make up the tech industry as a whole. This move allows him to shift responsibilities away from tech and towards society in general, and the financial markets in particular.

He certainly has a point, since Silicon Valley is based on venture capital, one of the purest forms of modern capitalism. And it’s not Silicon Valley alone that makes the rules of venture capitalism. Quite the contrary, even companies like Apple operate under the pressure of the financial markets, and the basic rules of these markets didn’t change very much after the financial crisis that took off ten years ago.

Even Whole Foods CEO John Mackey, who is very outspoken about the many merits of capitalism, agrees that the financial markets have their flaws. Whole Foods was basically forced to put itself up for sale by capitalists he famously called “greedy bastards”. He asserts to be very happy with Amazon now, but still believes it is wrong that a relatively tiny shareholder can have such an enormous influence. 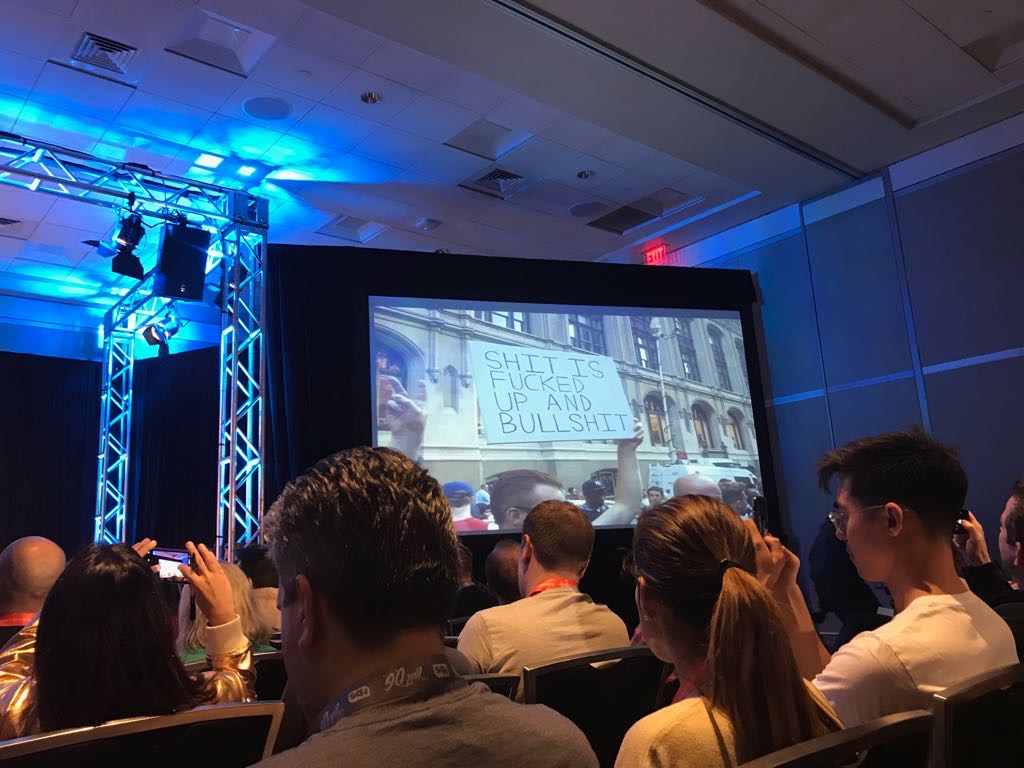 Which brings us to another point: the single focus on shareholder value as the only thing to optimise business for. This has been criticised a lot in the past, but tech conferences didn’t use to worry a lot about questions like these. Now they do. Journalist Ezra Klein took a systemic approach in his talk, showing how we designed politics, the Valley, our media, or Wall Street so that even good people act badly.

All systems are optimised to be self-sustaining, and they change only to the extent necessary for their own survival. That’s probably old news for someone who has read for example Niklas Luhmann, but nonetheless useful to take a closer look at, especially in times of crisis. Since our brains are also systems, this train of thought even helps to solve the problem of responsibility.

So who is responsible for the mess in our digital world? Systems are the culprit, and a systemic approach is needed to fix the disarray. We need to redesign our systems to better align them with values and purposes that go beyond systemic self-sustainment, while keeping them up and running. After all, systems like technology, capitalism, media, politics, and our brains have done great things for humankind in the past. So let’s not destroy them.