Calm Technology knows it is useful – but also knows its place

Our phones are like noisy, attention-seeking children, always demanding that we look at them. Yet, their younger siblings, smart speakers are quiet and reactive. Could we be finally learning from our mistakes? If you want a little hope that technology is moving the right way, here’s a glimmer of it for you:

The newest technology in our house is also the calmest. It doesn’t flash lights, ping sounds or drag our attention to it when we use it. It just sits there, quietly, waiting for the words that will bring it to life: “Hey, Siri.” 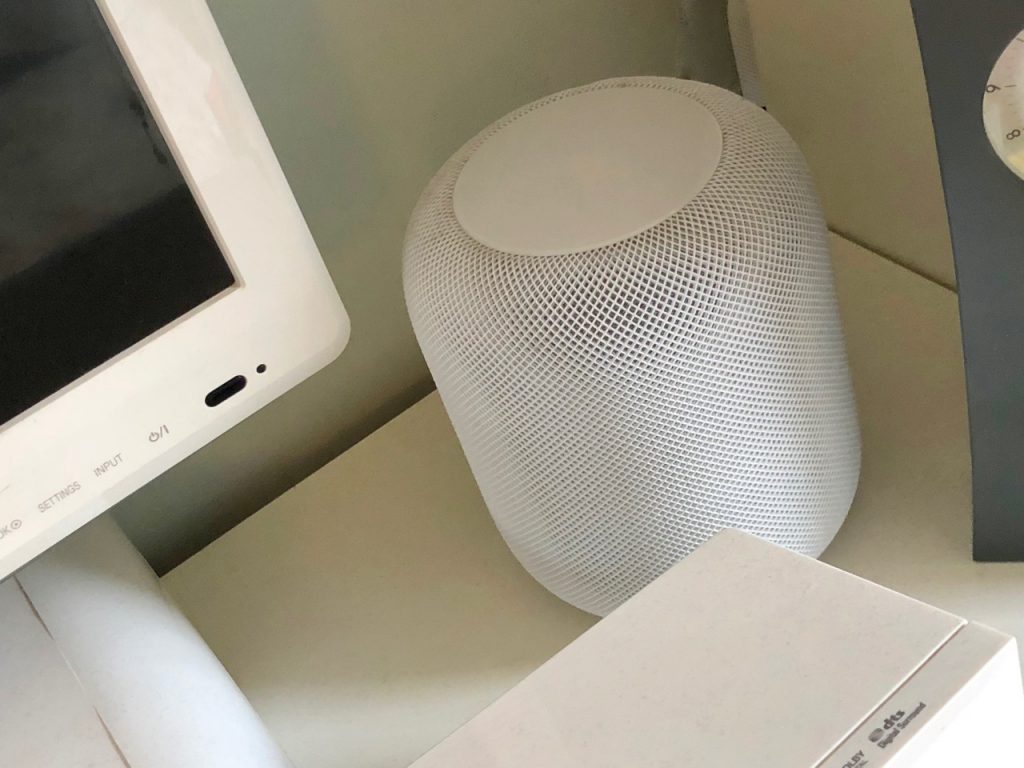 Now, to be fair, those words get said a lot in the house – usually in the form of “Hey Siri, play the album The Greatest Showman by various artists” said by a pre-teen voice, but still, it’s a piece of tech that doesn’t call attention to itself in the way that so many of my other devices do.

In comparison, sometimes my iPhone behaves like an attention-seeking toddler, constantly trying to show me new things to grab my attention. And when it grabs my attention, it does everything in its power to keep it there.

The HomePod – and the Amazon Echo in the kitchen – just sit there, calm, maturely, like a happy grandparent, waiting to be called upon.

The Age of the Attention Vampire

I think, perhaps, we’re in an odd point in the evolution of technology.

For a product that is so ridiculously successful, the phone still acts like it’s desperately insecure and need of reassurance of its role in our lives. It flashes light buzzes and pings, and is constantly busy with notifications whenever I switch it on. It’s as if it feels like it will fade from importance if it doesn’t constantly remind us of all the things it could do for us.

This is so much worse than previous generations of computing, which were much more static. Gamers, or online chatters, of a certain age will remember the acronym “AFK” — for away from keyboard — which you barely see these days. Why? Because we are never actually away from the damn things. Unlike desktop or laptop keyboards, we actually carry it around in our packets or bags most of the time.

We’re constantly being nagged by this little attention vampire in our pockets, trying to get us to use it, validate it, value it. Now, we’re on the threshold of a new age – one where computing is pervasive, and surrounds us. We’re no longer dependent on a single device in our pockets. The smart speakers are just the first wave of this – and the fact that none of the major platforms have notifications as a default is a really hopeful sign that finally we’ll learn the lessons of Calm Technology for this next phase of our digital journey.

Even our current technology can still be saved. We can work together with our devices and our platforms providers to make things better. I’m running the beta of the lates version of iOS – iOS 12, which is due to be released this autumn – on my iPad. And the other night, while sat on the sofa, sipping a whisky and browsing on my iPad, this happened: 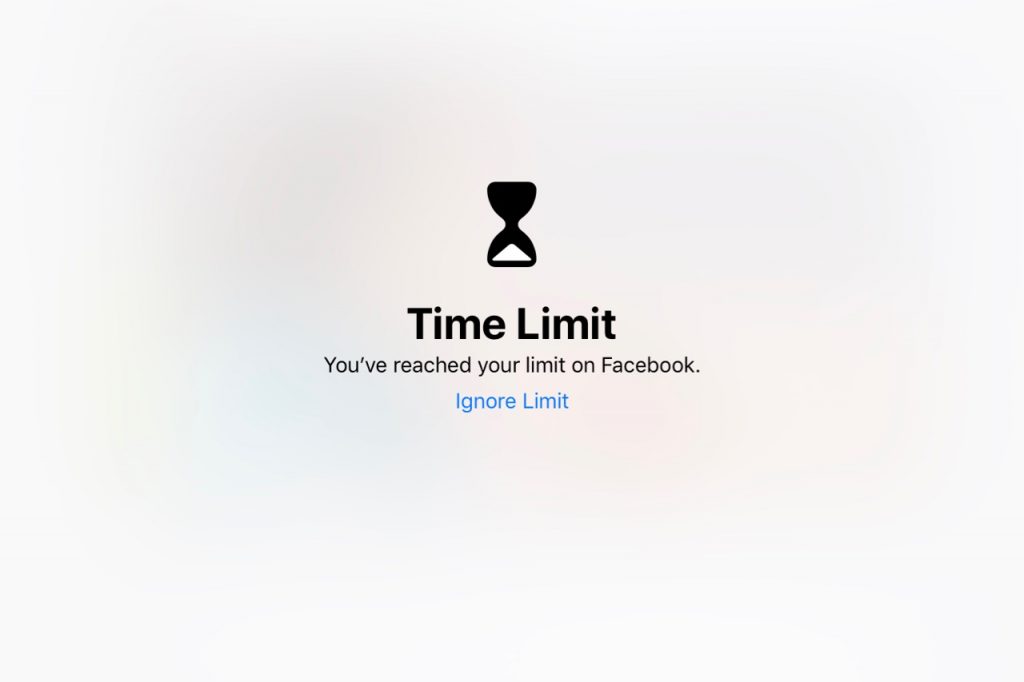 Yes, the technology itself is now helping me control my own usage of the device. Idly refreshing Facebook had sucked away enough of my evening. It was time to do something different. I can switch off notifications from the notifications screen itself – and in the couple of weeks since I plucked up the courage to install the beta, I have become death, slayer of notifications.

I can even check how much time I’ve been spending on each category of apps: 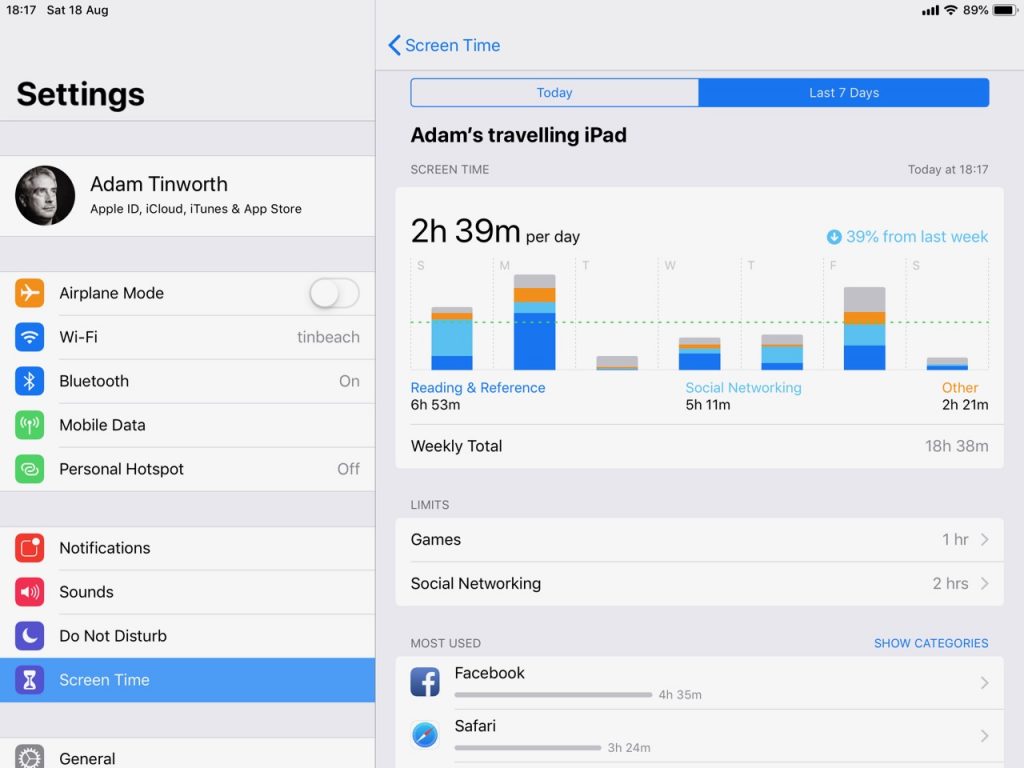 It makes perfect sense for Apple and Google to be doing this right now. They no longer have to worry about people continuing to buy phones. That will happen until something is finally able to replace them. So now they can afford to reign in the monsters they have created, and give us the tools to curtail the draw of services that thrive on our attention.

Long term readers might remember a great term for this – they’re helping us curtail the ludic loop of addiction built into our devices. And, indeed, this partnership between us and the device makers could go an awfully long way to reversing the excesses of the last few years.

Mixing the analog and the digital

I was in a bookshop last week – yes, a physical bookshop with printed books and everything – choosing some books with my daughter. When it came time to pay, I used my watch to pay contaclessly – much to the surprise of the shopkeeper. “Oh,” she said, “that’s the first time I’ve had anyone do that.”

That started me – I’m often an early adopter, and a couple of years ago I was quite used to being the first person to use watch-based Apple Pay in a shop. But now?

This got me thinking – why a bookshop, rather than a coffee shop, or even a deli? Could it really be that the sort of early adopter that tends to use Apple Pay on a watch – she was clear that people often paid with their phones – are not the sort of people that still buy real, physical books?

If so, that both gives us an origin of some of the problems we’re trying to fix, and the beginnings of a solution. If the people who design and use our technology see tech as the be all and end all of their interactions, no wonder we end up where we are now. “Dead tree” books are old hat! Why bother, when you can just fire up your Kindle, or browse Amazon?

That is not healthy. Media technologies rarely completely replace the ones that came before. Just because we have TV doesn’t mean there’s not a unique value in going to live theatre. Streaming from Spotify does not replace attending a gig.

As Amber Case, one of our keynote speakers this year, so clearly pointed out earlier in the week, putting down the digital and picking up the analog can be incredible useful in managing our relationships with our devices – and our stress. One does not have to choose between the digital and the physical – they can, and should, co-exist. 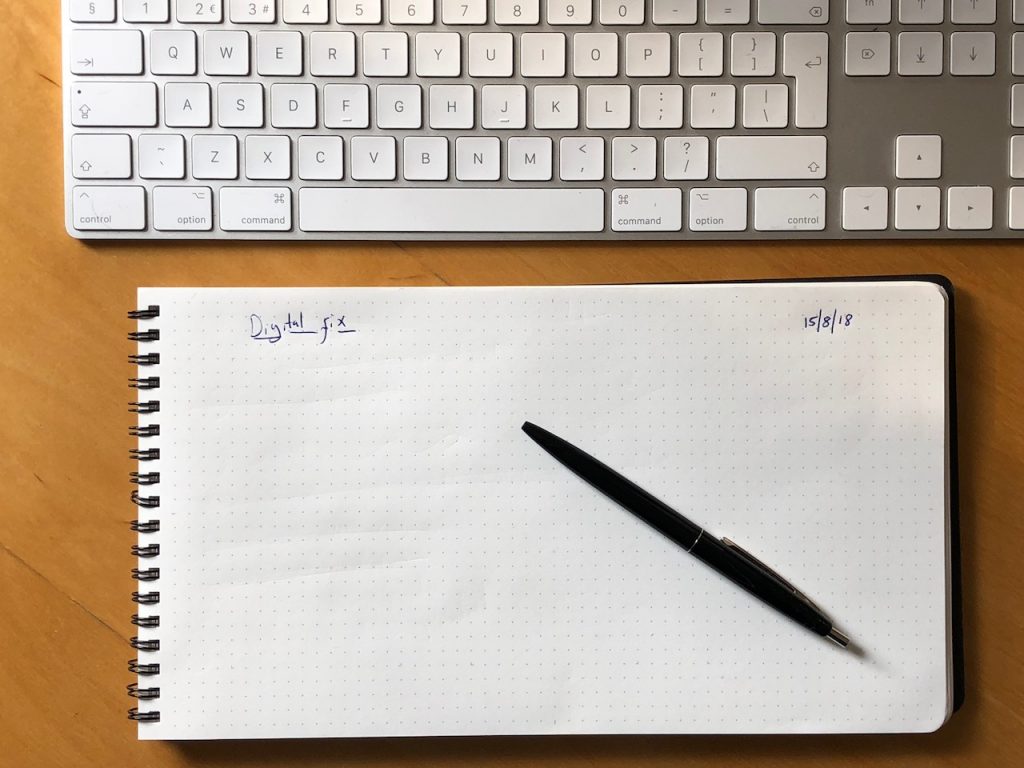 Calm Technology is, at its heart, secure and confident technology. It knows it has a role – but it is only part of our lives, not the whole of it. It’s happy to share with the physical. It helps us live all aspects of our life better, and draws its financial success from that, not from addicting us. It only contacts us when it needs to, and waits until it is called the rest of the time.

The mobile phone has won. It’s the centre of everyone’s digital life. It’s time for it to be a good winner, learn from its younger sibling, and wait around a little more, confident that it’ll be called upon when it’s needed.