Computer Vision is the next big test of digital regulation

Computer Vision may be the least talked about tech in common use today. But one aspect of it could have huge consequences - and we need to talk about face recognition now. Unlike Quantum Computing, computer vision is here – and now. I use it multiple times a day. It unlocks my iPhone X by recognising my face. It identifies objects and people in my photos. It suggests tagging of people in photos I upload to Facebook.

Anyone who attended NEXT16 might remember the display that recognised not just your face – but your emotional state, too: 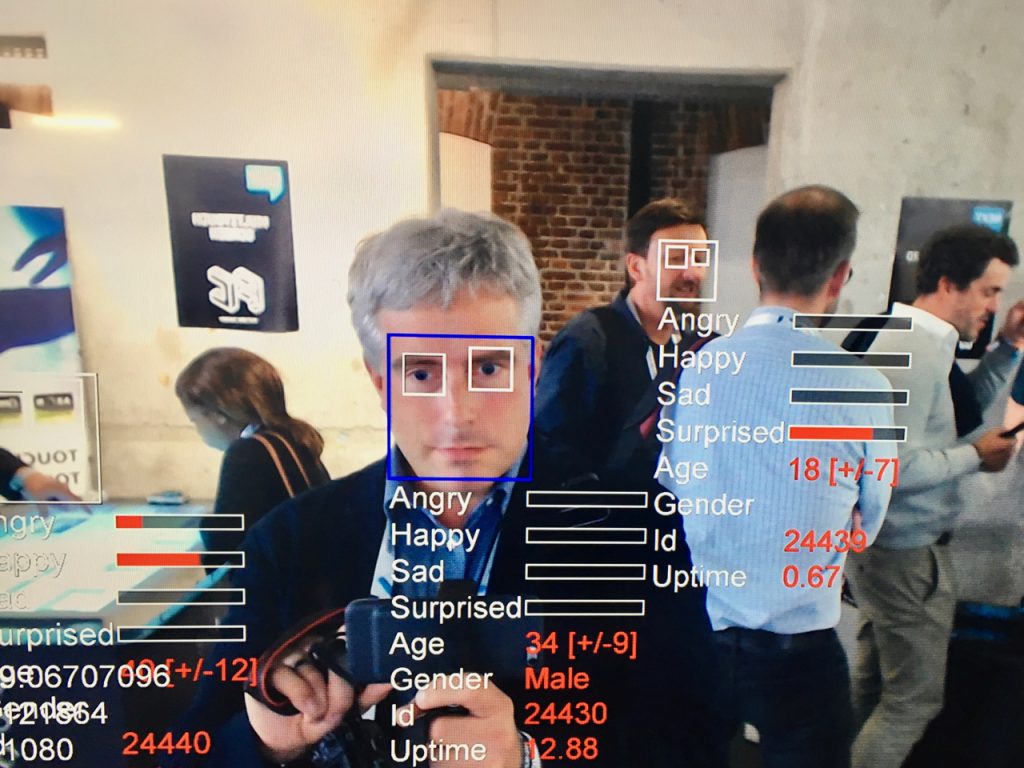 (There’s a very flattering estimate on my age there. Clearly still some work to do…)

In fact, basic computer vision technology has been available as a Google cloud service for nearly 3 years now. Computer vision is a technology of the now. It’s what it enables in the future that makes it interesting.

The Future of Computer Vision

In the near future, computer vision will be central to technologies like autonomous cars, giving them the awareness they need to “see” what’s around them, and avoid accidents. The best drones are already doing something similar, making decisions which prevent even a novice pilot from crashing their expensive new devices.

For much of computing, we’ve had to explicitly describe things for computers before they could know what they were dealing with. This machine-learning derived computer vision is taking that level of complexity away, and allowing computers to recognise objects in the environment around them with ever-greater accuracy.

All good, right? These benefits are seductively useful, aren’t they?

Tempted by this vision, people will continue to invite facial recognition technology into their homes and onto their devices, allowing it to play a central role in ever more aspects of their lives. And that’s how the trap gets sprung and the unfortunate truth becomes revealed: Facial recognition technology is a menace disguised as a gift. It’s an irresistible tool for oppression that’s perfectly suited for governments to display unprecedented authoritarian control and an all-out privacy-eviscerating machine.

The ability of tech to recognise a horse or a mountain is a pretty much unchallenged good. The ability for tech to recognise a face is a massive boost to surveillance capitalism. Just think about Facebook’s face recognition tech. It probably already knows enough about you to recognise you in the background of complete strangers’ photos – and that gives it ever increasing amounts of data about where you have been – and quite possibly who you have been associating with.

Some technologists have been warning about this for half a decade.

In an almost unprecedented step, companies like Microsoft are actively asking for a democratic debate — and regulation — around these topics. The company’s president, Brad Smith wrote this:

Facial recognition technology raises issues that go to the heart of fundamental human rights protections like privacy and freedom of expression. These issues heighten responsibility for tech companies that create these products. In our view, they also call for thoughtful government regulation and for the development of norms around acceptable uses. In a democratic republic, there is no substitute for decision making by our elected representatives regarding the issues that require the balancing of public safety with the essence of our democratic freedoms. Facial recognition will require the public and private sectors alike to step up – and to act.

There’s reason for hope in this, isn’t there? We have companies starting to actively ask for debate and legislation around new tech, rather than just rolling it out and seeing what happens.

This is a perfect inflection point – a way we can reward the companies who take these stances by becoming their customers and partners, and also by engaging in sensible, pro-active Dante about how to constrain the use of this tech without destroying our ability to use this technology.

I don’t want to go back to manually tagging my photos, and I’m looking forward to my autonomous car — but I don’t want either the government or Facebook to have a complete record of my movements based on CCTV and other people’s photos. That’s an intrusion into my privacy too far.

This, as a technology, is our first really big challenge to get our consumer and legislative behaviour in order after we became aware how much tech is being abused. Are we up to fixing digital yet?