David Mattin: New technologies and the search for meaning

The last wave of tech failed because it didn’t account for humanity. If we remember our higher order needs, says David Mattin, we’ll build better tech in future. David Mattin is Global Head of Trends & Insights at TrendWatching, where he writes and speaks about technological, social and cultural change.

Facebook has been breaking democracy, and Zuckerberg has been in front of the senate, where the senators clearly didn’t understand the situation, or Facebook itself. Elon Musk is behaving oddly. People are checking their phones 600 times a day. The challenge of digital is becoming clear; that early promise of a digital brotherhood and sisterhood has been unfulfilled, and instead we’ve had endless toxic behaviour and problems.

Last year I talked about the fact that Silicon Valley had an idealism that humans were basically good, and all we needed to do was connect them. If we’d remembered my simple truth, we might have seem many more of these problems coming. New technologies come along, and will serve human needs.

This is the question everyone is asking. We’re taking about automation, and AI, and digital health. But we need to look beyond that.

Modernity can be thought of as a two stage process:

Modernity plunged us into a crisis of the second. it stripped us of religion, while it freed us up to obsess over meaning and other higher order needs. We obsess over this more than any other human beings in history. That quest for purpose in your existence will define life in the 21st century for millions of people.

How are new technologies going to unlock ways to serve these needs?

Up until now, we have only really connected with other human beings. But now, we are starting to connect with AI-fuelled digital entities. So far, these have been very functional transactional conversations. Gartner is predicting that, by 2020, we’ll have more conversations with chatbots than with our spouse.

We’ll start connecting with chat bots over health, meaning or happiness. Have you ever asked Siri something that goes beyond the functional? If so, you’re already part of that shift. Apple know we are doing this. They are hiring counsellors and psychologists into the Siri team.

We are starting to have meaningful connections with things that aren’t human beings. Nely is a robot that roams around Istanbul Airport helping people. She can understand the emotional state of the person she’s taking to, and adjust her behaviour to match. Elliq is an AI-fuelled companion for older people.

Gatebox is a home assistant with a character living inside it. And that’s just a first step towards… sex robots. People will, probably, end up having full-scale relationships with human-like sex robots. Don’t believe it? Only 20 years ago online dating was steeped in utter shame, something only ultra nerds did, when they’d failed in real life. Now, we have Tinder. Mindsets shift. We need to prepare ourselves.

Constellation AI – a conversational agent that learns about you, that allows you to have a greater clarity about who you are, and make better decisions. You can sign up to test it. 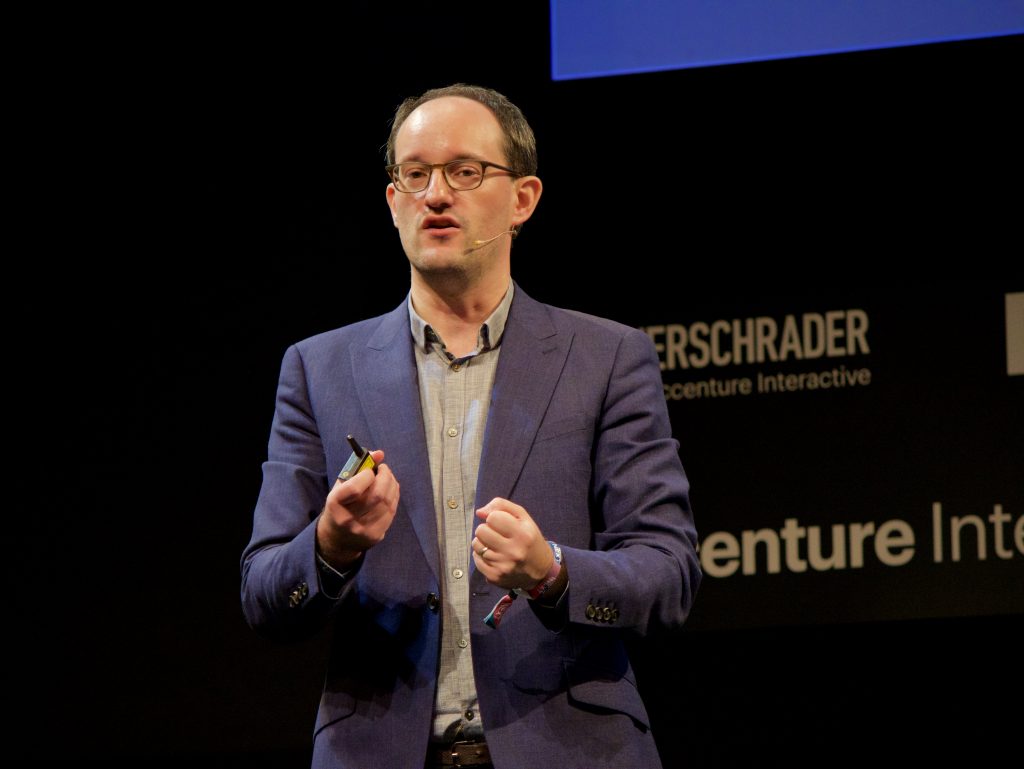 We have always sought to elevate ourselves above our peers, to make ourselves special. Status used to be about material status. We are so affluent now that material possessions no longer have the same status. So now, who you are is the status you compete on. This has been fuelled by Instagram, where people show off their lives to send a message about status. It sends people on a massive quest for self-improvement. It’s a status quest.

Humans beings in the 21st Century will use new technologies to test and improve themselves. For example Nutrino is a nutrition AI, paired with a wearable device. We’re filling the world with sensors – that’ll change our relationship with our bodies. Xenoma is a shirt that measures your body’s health.

Electrospit Talkbox – is a collar that allows you to magnetically control your voice… Digital technologies that allow us to hack our bodies to gain new capabilities are becoming more common. The boundaries between our minds and the physical world are starting to blur. Immortality (and eternal youth) is the ultimate status play in the 21st century. Think of the status of living for hundreds of years and still looking young. Seems fanciful – but it could happen.

This is a real, powerful shift that will help shape the 21st century.

We are hard-coded for belief, to search for a meaning about our wider role in the universe. And now we believe we’re just a species of evolved ape in a tiny, unremarkable corner of the universe. We’re the first generation to believe that so widely. And so, we will need to seek new beliefs.

Let’s start with political beliefs. MTV Brazil created an AI virtual politician, allowing you to gain greater clarity about your own political positions.

Lawrence Lessig is laying the groundwork for Seed, a massive virtual world with some existing ground rules. We can learn from how this develops, and apply it to our own democracies.

How about technology enabling new spiritual beliefs. Way Of The Future is the first AI church – he wants us to build our own AI god, whom we hand the running of the planet over to. We can then just play, like children.

What sort of technologies put new meaning back into our lives. Can we believe in new ideologies that evolve in virtual world? Can we create virtual worlds with reward and punishment at the hands of a God actually exist? How are the unemployed and the redundant find meaning? Maybe they will seek it in virtual worlds with meaning inherent in them. They’re already looking for it in Fortnite.

Are we going to create massive virtual utopias that no-one wants to leave?

We are hard coded to seek power over others. We forgot about that in the first wave of techno-Utopianism. We do not want to make that mistake again.

As citizens, be relentless about asking who is gaining power from these new trends. As innovators, see your own innovation through the lens of these higher order human needs.

You might think you are too small to make a difference. Don’t think that. Everything you do helps set expectations, that spread. Big companies respond to that.