NEXT18 Themes #2: Preparing our societies for transformational technology

The speakers on day two of NEXT18 dove deeper into the things about humanity that technology can't change - and thus challenged us to address the factors we can. We’ve stopped dreaming about technology. We’ve stopped thinking about how it can – genuinely – enhance our lives. We’ve become subservient to it, and now follow the harsh diktats of the notification ping and the algorithmic demands of the Like button.

We can change that. It seems odd that one of the most crucial talks at a tech conference might come from an artist – but that’s exactly what happened with Tobias’s Revell’s talk at NEXT18. He made a powerful case that our storytelling and art around computing and technology has got so limited in vision that it’s hindering our ability to build better tools, because we no longer dream of those better tools.

Art leads technology, so better art could lead — eventually — to better tools, ones that don’t just redesign our lives in search of productivity, but which enhance our experience of being human.

And, perhaps, we need to remember better what does make us human. Technology doesn’t fundamentally change us, argued David Mattin. We are still the same old animals we ever were, and you need to examine any new technology through the lens of fundamental human needs. Previous waves of technology have been incredibly efficient at meeting our basic needs – like food and shelter – and, in many parts of the world, possessions have become a burden rather than a status symbol. 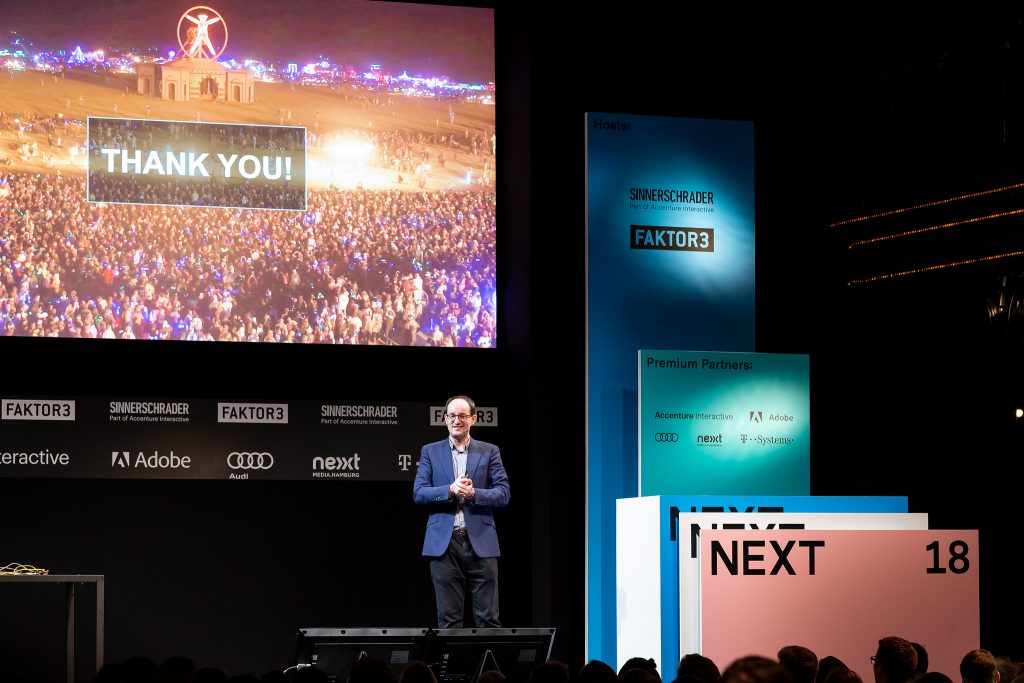 Instead the next wave of technology is helping us address our higher order needs:

The question for us, both as users of these products, and as innovators creating them is twofold:

That might well give us a more holistic view of how new technology becomes woven into the tapestry of our lives.

At least part of this process will involve resetting our relationship with technology. We’ve built it in a way that is demanding, insistent and distracting. And it is consuming too much of our attention, like a needy relative. As Amber Case suggested, we need a calm technology that consumes the very minimum of attention needed to facilitate and enhance our lives, and no more.

Technological tools that are fit for purpose 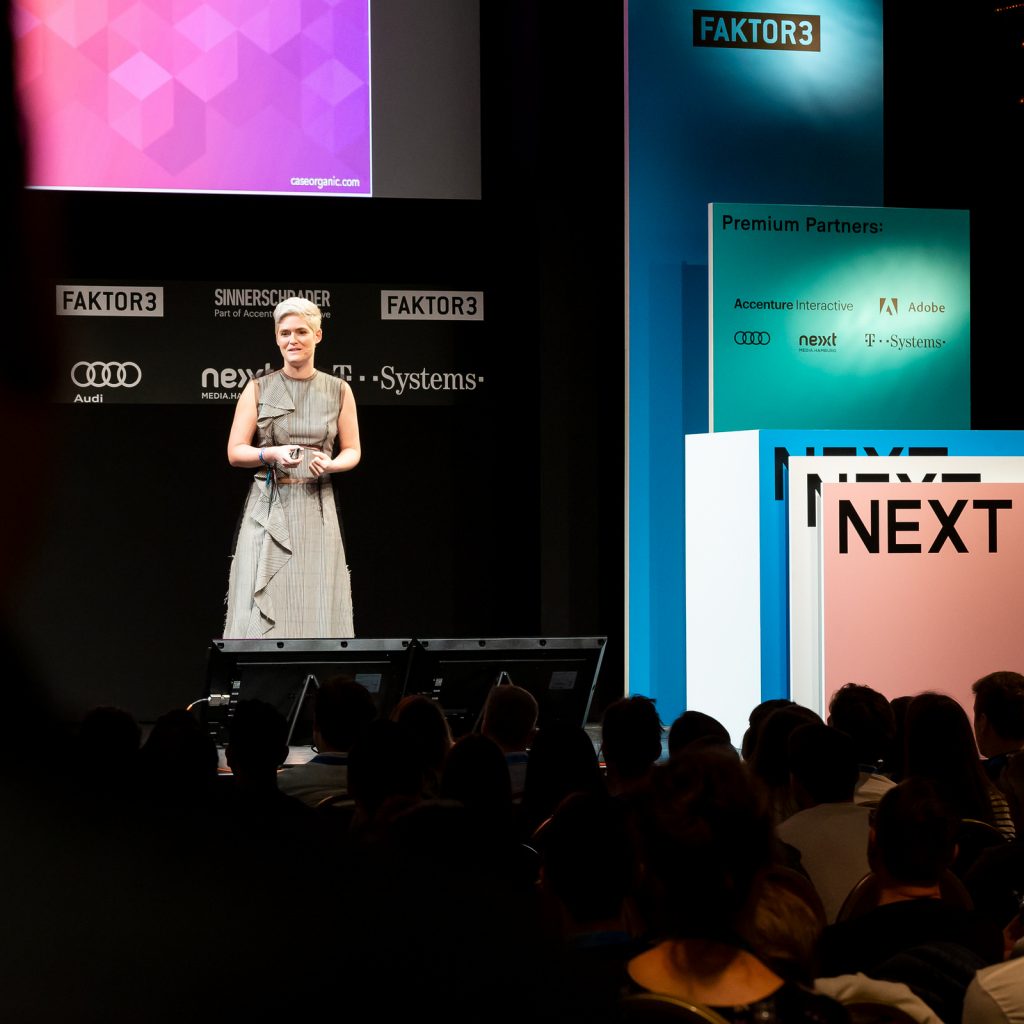 Some of the pain here is in our desire to make our tools more human-like. Some of the most useful tools make no pretence to humanity, but can still communicate with us, like the simple bleeps from a Roomba. Not everything needs to have a voice interface to be useful – or to respond with a voice, even if it understand spoken commands.

Instead, the best technology is humming away in the background of our lives, enhancing our experience of it, rather than distracting us from it. Technology that demands out attention could be, quite justifiably, called parasitic.

Joseph Lubin suggested that Blockchain could – eventually – start providing a mechanism for undoing that damage. By transferring ownerships of our digital selves back from the surveillance capitalism companies to our own ownership, we regain control of the financial value of ourselves. 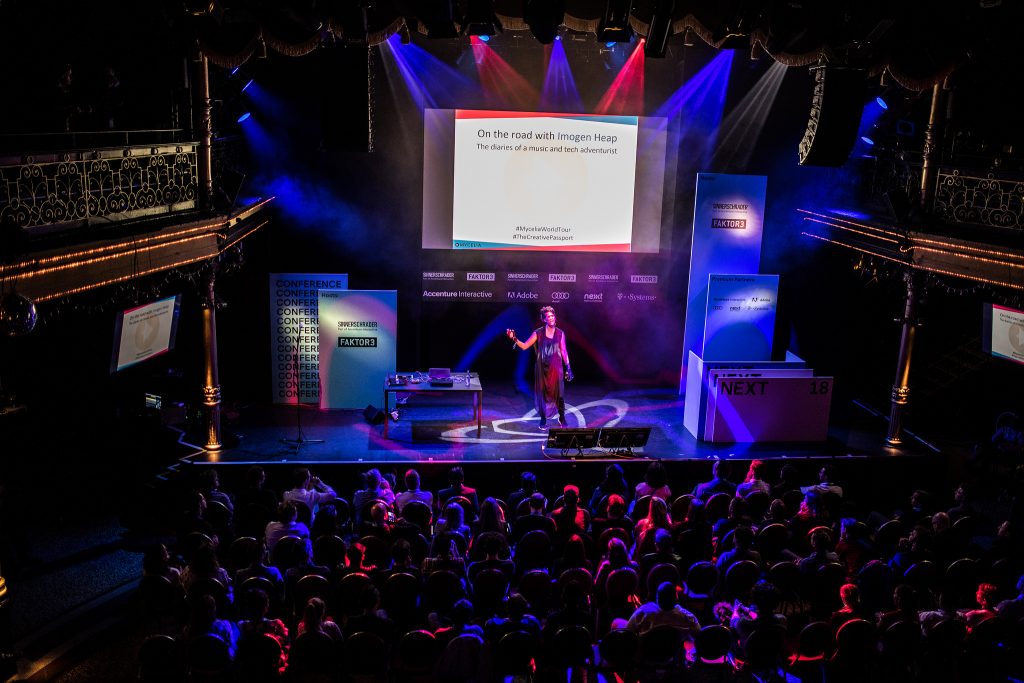 Imogen Heape gave us a practical example of that, talking about her idea of Mycelia – a Blockchain-based system for recording both music ownership and other information, such as which musicians played on which recording. Like Lubin’s proposals, it’s still at the concept  and building out stage, but the link here is dreaming of a technology which puts the user at the centre of the technology model rather than the corporate platform dominating all.

But humans do not exist in isolation, and neither do new technologies. We may not be able to transform ourselves, but we can transforms the technology we use to enhance ourselves, and thus change the direction we’re moving in. A good example of that is AI, which after literally decades of development — much of it witnessed by our speaker Virginia Dignum — it’s approaching the point where it is widely usable as a technology. But as she so clearly put it, it’s not something that’s happening to us it’s something we are doing. And there’s signs that we’re doing it right. Many organisations, be they academic or governmental, are addressing the legal and ethical implications of this technology before it hits massive scale adoption.

We are, at last, learning from our mistakes with previous waves of technology.

But do we still need to go further?

Indy Jonar finished the main stage sessions with a sobering look at the work we may yet have to do. The world is complex, and interconnected – and the impact of the technology we’re deploying may reach further than we expected. He described to us a vision of history as the process of dividing things, making them manageable, controllable — and ownable. Technology is challenging us to reverse that process, by making the interconnectedness of everything so much more clear. 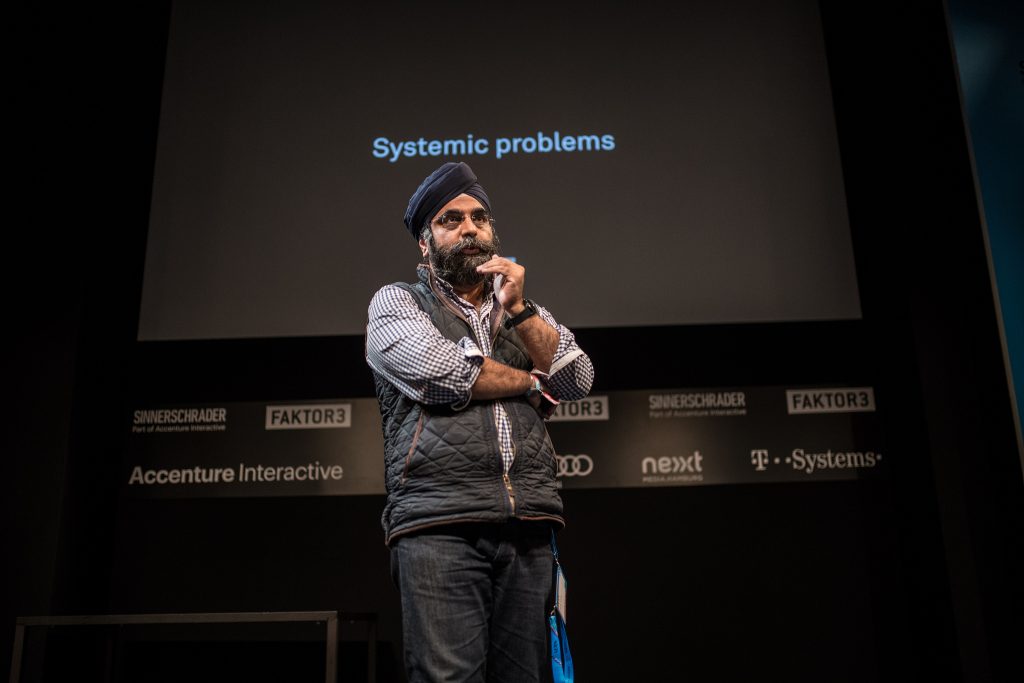 For example, the very real threat of global warming has been made clear this week – but it’s also one of deeply interconnected systems of industry, ecology and weather. We lack governance that can adequately manage these highly complex, cross-national problems, and it’s possible that some of our assumed solutions might not be as good as we hope. For example, there’s an inflexibility in Blockchain Smart Contracts that might suit some situations, but which doesn’t allow for human flexibility — or compassion.

Equally, how do we legally deal with an entity like Facebook that might only be able to provide its effectiveness when it exists as a natural monopoly? As digital assets start to grow in importance in compassion with physical assets, do we need to rethink how we manage these?

And, if there’s been one consistent trend of technology, its been the evisceration of the middle management layer. Our cities are still designed around the principles of hierarchical offices and commuters working set hours. One could actually trace the direct line from the industrial revolution, to the services industry, via the time and motion work that Revell talked about earlier.

The challenge for the digital human

It could be that the digital human doesn’t need to reinvent themselves — because humans don’t change fundamentally — but reinvent their cities, their laws and their governments to reflect the changing mechanisms we have for addressing our higher order needs. We need to manage the cognitive feat of thinking big while also keeping the rights of the human in mind. The changes that are coming need solutions for:

That’s a lot more challenging than just dragging Zuckerberg in front of politicians for a telling off. It’s certainly a lot more challenging than writing the next big app. But it may be the vital digital fix our societies need to survive these transformational technologies we’re filling our lives with. And in that challenge comes the opportunity for both deep fulfilling work — very much a higher order need — but also the next wave of businesses that will address the failings of the last.

Are you ready for the challenge?