Fighting for the future in the media of the past

It seems counter-intuitive to seek answers to the problems of the future in the media of the last millennium. But sometimes a good, challenging book is exactly the antidote to the social media age we need. It’s an odd thing writing about a book you are a co-author of. It’s perhaps even odder that such a digitally-focused event as NEXT should be producing a print book (in German, at least. Us Anglophones are stuck with an ebook.)

But then, an event that rejoices in bring people together physically in a beautiful old theatre can probably appreciate the values of print, and of the book form, too.

Reading the book has been a fascinating process. I’ve ready plenty of books on digital in recent years, but this is the first collection of essays I’ve indulged in for a while. On trains, on the sofa, on my own special armchair, in bed, I’ve been reading the book over the last couple of weeks, filling it with highlights and notes using my iPad.

The power of the thinking book

To me, this isn’t a “reading” book. It’s a “working” book. It’s a bunch of smart, deep thinkers (and, err, me) looking at where we are, and thinking about how we can do better. It’s the sort of book that invites you to think about the future you want, based on a bunch of provocations.

To me, one of the most profound observations was from Virginia Dignum:

…the first issue to realise is that the digital – as the social, or the real – cannot be “fixed”. The world is constantly in flux, and the “fixes” we attempt today are an effect of what we did yesterday and will affect what we will do tomorrow.”

We are in a period of profound transformation, and going backwards is not an option. Our only choice — our only sane one, at least — is to go forward more thoughtfully. 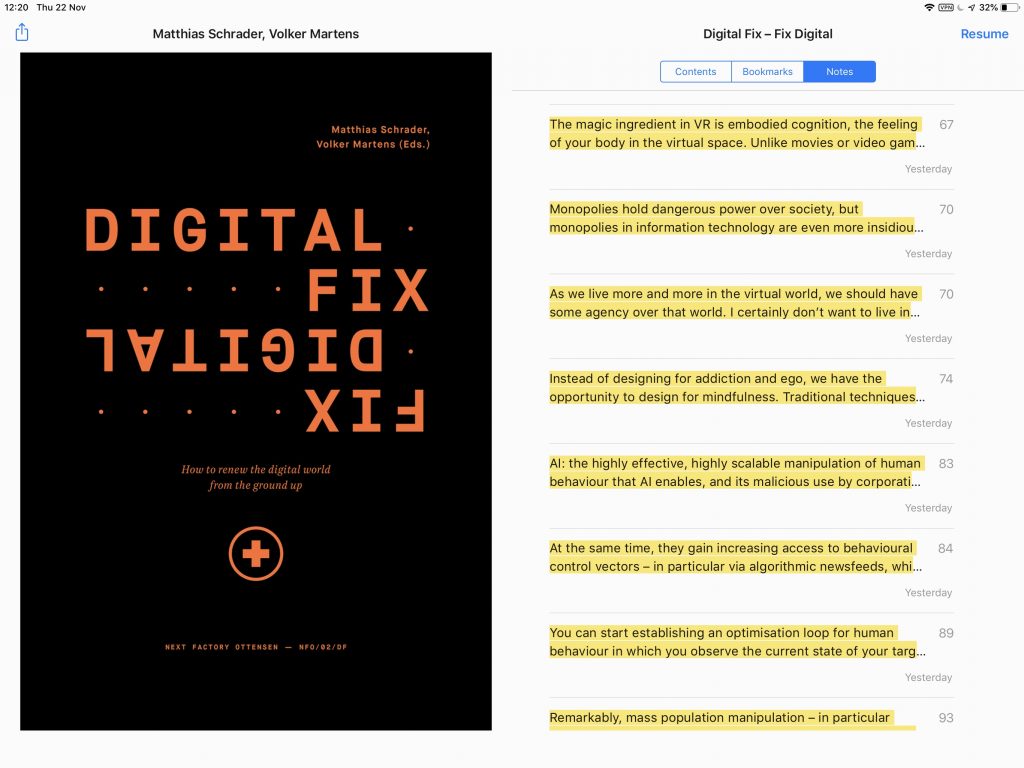 Now, some of the chapters in the book border on the terrifying. In particular, François Chollet’s cautionary look at how existing AI techniques coupled with the data Facebook already has on us could be used for wholesale population manipulation has been on my mind every single time I’ve logged into Facebook since.

Many more of them are challenging but practical, attempting to explore what the likely challenges are to emerge around new technology. Several authors acknowledge that unintended consequences are inevitable. But, by definition, we can’t plan for the unforeseen. We can only adapt to it.

But there are some serious, if not easy ways forward here on AI, VR and other emergent technologies. And these conversations are happening before they hit the mainstream of adoption.

From pulp to provocation

These are discussions we need to be having at a serious level — and making others aware of. And in the era of memes spreading simple — and some would say over-simplistic — messages, and the base unit of “engagement” having got as simple as the single click of a Like button, there’s a value in immersing yourself in a volume like this.

One of the talks from NEXT18 that has really stuck in my head was Indy Johar’s warning about how complex the systems we’re dealing with are — and how interconnected everything is. A book coming at a single topic from so many different angles gives you contrasting views, and allows you to see both the complexity and the interconnectedness of the topics.

The book length allows you the intellectual space to do that, in a way that shorter forms don’t. It’s rare that a new format completely displaces the old. Theatres and cinemas survive even as Netflix streams to our iPads. Books certainly have a role in the digital age.

Swerving away from short form

Now, I’m a blogger, and have been for checks notes 17 years…? (Seriously?) And yes, you could argue that many of those articles could just have been blog posts instead. And they could. In fact, some of them started off that way. But there is a value in collecting them together, aggregating them as a single body of work that you engage with, makes notes on and, critically, finish.

Finishing a book invites reflection, thought, analysis and 800 word follow up blog posts (like the one you’re reading). You can’t ever finish the internet and I should know. I’ve given it a good go on more than one occasion.

I want to see more books like this. More volumes collecting the thoughts of how smart people are thinking about the future. And there’s a delight in hearing multiple, overlapping — and occasionally contradictory — voices. Maybe we’ll see more from NEXT. But volumes like this could come from others, too.

Too many of the problems we need a (digital) fix for arose because we allowed new technologies to establish themselves in an un-examined way. Let’s not make that mistake again. Let’s take the time to think, to write and to read, to step away from the endorphins rush of social media, and engage with a thoughtful vision of the kind of digital human we want to be.