Drink up. It’s closing time for the traditional CMO.

If you think that CMOs can still get by as a purely advertising-and-PR function, then I'm afraid last orders have been called. Today's marketing needs a profound culture change. Here's how. The Chief Marketing Officer should be the Chief Culture Officer – or so Martin proposed. While I wouldn’t like to suggest that the team at NEXT are a single hive mind, I certainly agree with him on this one. While many people claim to have a digital-ready marketing operation, far too few are prepared to take on the fundamental changes that true transformation really requires.

And, I’d like to explore that idea through the lens of a single marketing tweet, that went viral enough to get written up all over the web. And this is that tweet: 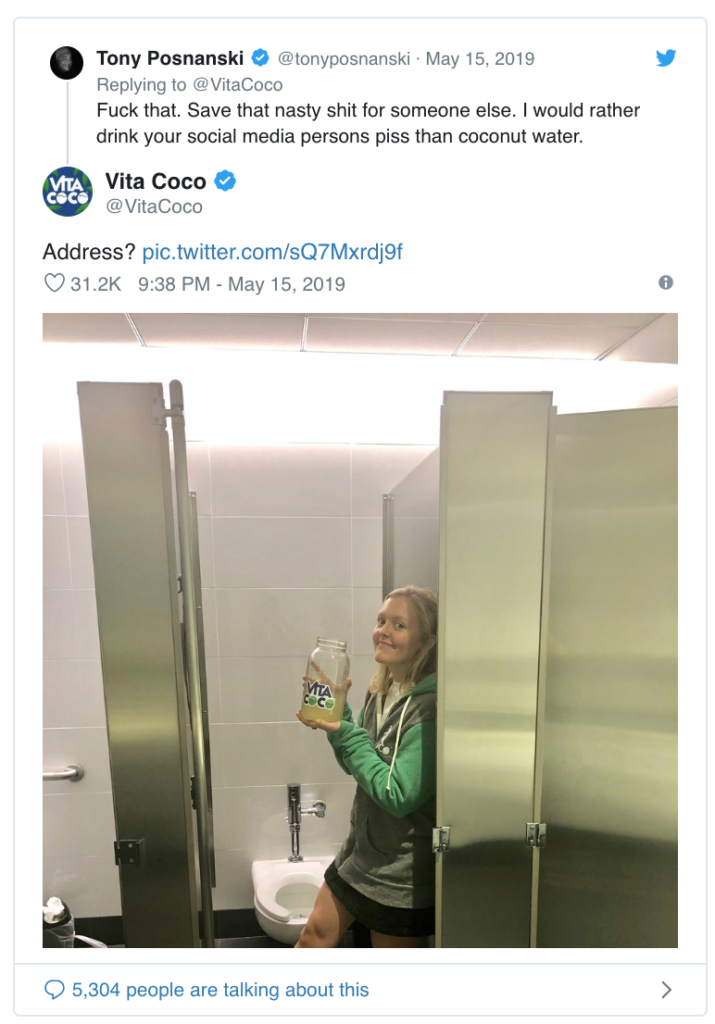 Yes, this is a social media person offering to send an influencer a jar full of her, umm, byproducts.

You might quite reasonably ask “what does a woman with a jar full of urine have to do with digital disruption of the CMO?”

To which, I will reply: “I’m glad you asked, let me explain.”

And, even as you give me a skeptical look, I will prove it to you by stripping this back to the essentials. Because a tweet like this challenges us (work with me here) to actually evaluate what marketing is in the era of social media.

The Essence of Marketing

Marketing is, in essence, a communications job, but it’s one that can operate on a number of levels. At its most simple, it’s telling customers about products. At its most sophisticated, it’s the function that erodes the lines between the market and the company, helping the entire business embed itself within its potential client base.

For a tweet like this to emerge from a company – even a small one – and pick up the amount of both owned and earned media it did shows a level of sophistication in the way the company’s marketing is operating. To achieve a tweet like this fluidly and authentically, the CMO needs to have influence or control right across a number of the company’s functions. The CMO needs to be able to function in multiple Parallelwelten.

Let’s break it down.

If you have an internal culture that require multiple stages of approval to publish anything, you can’t do this.

If you have an internal culture that refuses to do anything but take the product seriously, you don’t get tweets like this.

If you don’t have an internal culture that values fast, productive action that shows results, you can’t do this.

Marketing of this level require s deep alignment with the corporate culture – and a willingness to celebrate this sort of playful, attention-grabbing approach. You can’t paste this onto the outside of a more staid organisation, because people will push back. This needs to be deeply ingrained in the culture – and part of that messaging is the responsibility of the CMO, as well as the rest of the C-suite.

Of course, cultural alignment isn’t the only form of alignment that needs to be in place. If this messaging doesn’t fit with the product — and thus, the brand — you’re on to loser.

If you don’t understand what your brand is, what it stands for, and how those align with the marketing message, you can’t take advantage of these moments of potential attention. In an information rich age, attention is painfully scarce, and you need to move swiftly and surely to capitalise on potential moments. To do that while maintaining a consistent brand voice is hard.

When you do something like this, you better damn well make sure that the entire company is behind it. The last thing you want is some well-meaning senior figure condemning it when a reporter phones up for a comment. Not only does the corporate culture need to be in the right shape – you need to be able to let the entire company know that a storm of attention is coming — and fast.

At the most simple level, you’ve got to be able to hire smart, agile people who can respond with a strong brand focus to real-time discussions. Those people are likely to be slightly more “edgy” than traditional corporate culture would prefer.

Not only that, but you need an HR process that allows employees to put themselves forward as faces of the brand, in the way that this social media producer has done.

Try doing something like this, where IT regularly blocks access to social media tools because “they’re not for work”. Going on. Try it.

Again, the sorts of monitoring and listening tools that make this sort of communication work have to be available for the use of the people who need them. If IT is deeply aligned with the business, and sees itself as a facilitation department rather than as a policing department, this works. Otherwise… another barrier.

So, yes, just a simple marketing tweet. Rather cheeky. Rather biological. But it worked. I’ve just written — and you’ve just read — the best part of 800 words, based on a coconut water brand you’d never heard of a week ago. Heck, I hadn’t even heard of coconut water a week ago.

Transformation is often more subtle than we give it credit for. And sometimes success only manifests as the public tip of a profound cultural shift within an organisation. You probably aren’t in a business where a tweet of this exact style is appropriate. Fair enough.

But are you up to the challenge of shaping an organisation whose understanding of its own brand and market positioning is so fluid and comfortable that you can maintain relationships and interact in this way?

That’s the new job of the CMO.

Photo by Benjamin Voros on Unsplash