50 years ago we put a man on the moon. Yet, in some critical areas, we haven't advanced in 20 years. Can we apply purpose to make the world better - and our businesses with it? Brian Whipple is CEO of Accenture Interactive. He spoke during the morning session of NEXT19 on 19th September 2019. These are liveblogged notes captured during the session.

What can you do about this universe?

50 years ago, man landed on the moon, with very primitive technology. Now… it’s a very different world. When Brian was a boy, he used a payphone to call for a ride home. He did it without a coin by using a collect call that his mother wouldn’t accept – just using it as a signal to collect him. That’s an alien world to his children.

We can do anything – but are we doing the right things? Do we have the right constellation of investment? Whipple lives in an area that gets a tonne of snow. The family bought a giant toboggan. It fitted about five people. Two seconds into using it, he knew he had a problem – it went like a bat out of hell. He ended up throwing children off it, before he crashed into a giant, icy snowman at the bottom of the hill.

He ended up with four broken ribs, and a sense of his own capacity for idiocy. This was back in 1999. He went through the standard emergency room trauma and bureaucracy. He waited. He had to tell his story again and again.

20 years on, how is that process? His son had a basketball accident recently, and the experience was… exactly the same. No different at all. How is that possible? We put a man on the moon 50 years ago. You can have groceries delivered, by ordering from your phone. Why isn’t there an app that routes you to the best local hospital, that uploads the insurance data, that has the story of what happened ready to go for anyone who needs it?

Why do 20% of children worldwide not have access to vaccines? Part of it is access to refrigeration. Nigeria has 190m people – and 90m of them have no access to reliable refrigeration. Then there’s identity. There’s no records, no clear way of knowing which people have had which injections.

1.1bn people worldwide have no digital identity at all, which means they struggle to get access to digital services. 70,000 people have been left homeless in the Bahamas after a hurricane. One of the biggest problems in helping them is the lack of a digital identity – how do they figure out who is who?

How is this possible now?

Accenture Interactive work on some very cool experiences. He has a lucky job and a great team, doing amazing work. But they are top of the list for not doing enough.

His family adopted a boy from East Africa. He gets him together with a friend form that part of the world, to keep in touch with his heritage. The friend – Anthony — says that what the region needs is water, or, more importantly, water technology. They need the money for a pump to access the water from the ground underneath them. The tech is there. The money isn’t. 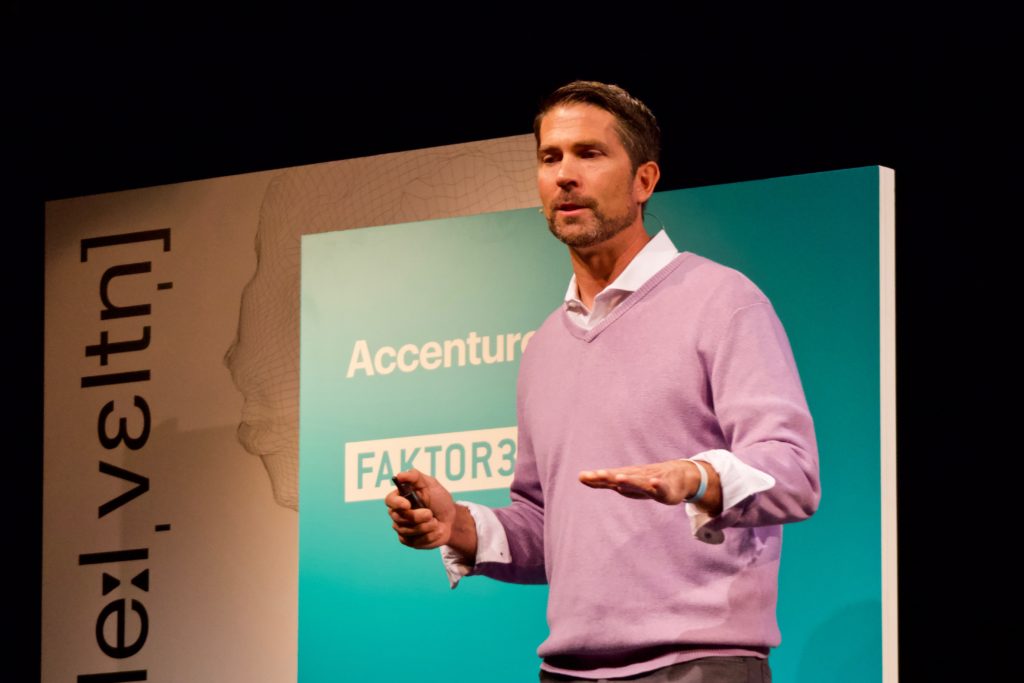 Do we lack the technology?

Women in America can get diapers in an hour, yet three years ago, 9,500 containers got stuck in San Juan port after a storm. Half of them were food, and half of those rotted away. How is it possible we don’t have the supply chain to deal with that? We have the tech. We’re just not applying it with purpose.

Is it capital issues?

The amount of VC invented is up 59% on two years ago. Digital health investments are up 21%, sustainability are up by 25%. The millennials – whom are starting to inherit money – really care about sustainability. The money is there. Employee retention goes up 300% when they can associate a particular purpose with their employers. More than 50% of consumers find brands with a clear purpose attractive.

The problem is the brain – the executive brain that is afraid of breaking the permission barrier. It dislikes uncertainty and is risk-averse. And self-preservation. Makes it easier not to agitate and change.

But we only have one universe, and only a short time to change it.

But we are making progress. We’re using VR and AR to train social workers to going into homes where children are at risk – AVEnueS. In Stockholm they’re using Google Home to deal with loneliness amongst seniors. Babylon in the UK is allowing people to make health calls remotely.

Over the next 15 years, 70trillion dollars is heading into Millennial pockets. They care. Be ready.