Thomas Webb: VR and the future of society

Technology is very close to magic, if you do it right. But who is the magician behind the curtain of today's technology? 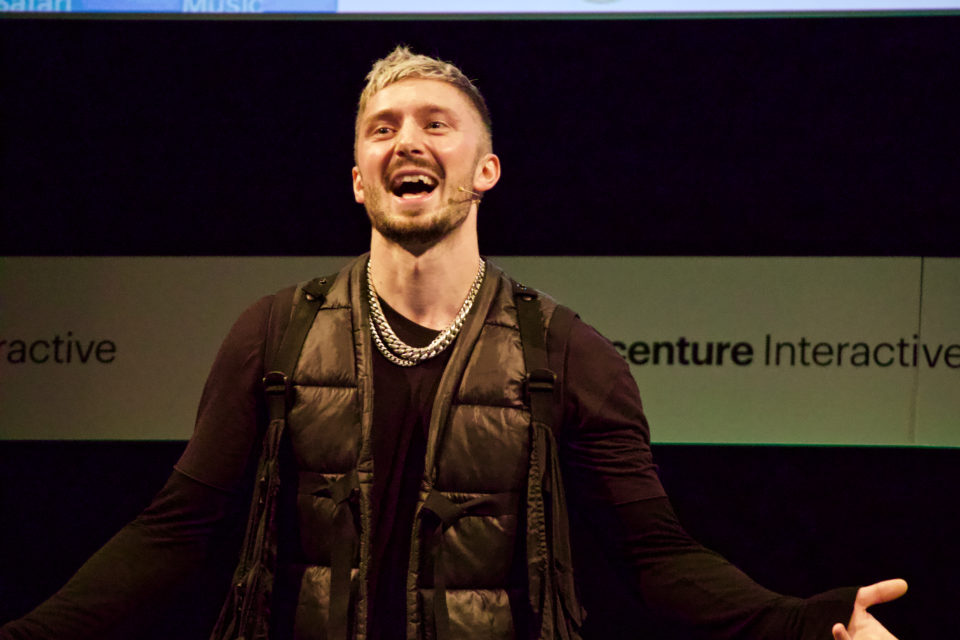 Thomas Webb is a multi-disciplinary artist and creative hacker living in London, UK. He spoke during the afternoon session of NEXT19 on 20th September 2019.

If you Google Webb – you’ll find a Wikipedia page about him, that he wrote. He made it up, and made it look authoritative. He hacked Google by putting keywords into his domain name. He started experimenting with technology magic, tricking people with technology – fake newsing the world.

Disney created Disneyland to immerse people in fairytales. It was a huge success. Webb claims his Dad wrote a hit 80s video game called Out Run. He didn’t get world famous or rich. In the 80s, the government were trying to get people to learn to code, so they used stories about the outliers who became rich and famous to encourage that.

His dad also sold the original Motorola phone 45 years ago. People used to reject those early mobile phones because they didn’t want to be contactable. Now he’s living that life all the time – always available. We all are. Virtually nobody in the theatre uses Find My Friends, according to a quick show of hands. Gen Z do it all the time. They’re used to their friends just knowing where they are. How has that happened? Parents insist that it’s turned on when they give them a phone. We see the merit of these decisions – but we can’t see the impact in 10 years.

Technology now is being controlled by a few companies. The social media boom has been controlled by a company that’s a bit… questionable. They are essentially unaccountable. As Webb travelled to Hamburg, he found Heathrow full of screens advertising Facebook’s privacy. But the interesting thing was the degree to which it connected the digital realm and the physical realm.

Read this. All of our communication is increasingly attached to our social profiles. The document shows that Zuckerberg wants to destroy phones via VR/AR. He sees it as the next big computing platform. And he wanted to buy the Unity video game engine. But they wouldn’t sell.

Johanna (@johwska) made a couple of beauty filters that garnered her thousands of followers. But she can’t code. How did she did this? She used Spark AR, the language that Facebook created because it couldn’t buy Unity. And once a few people became famous like her, they made it available to everyone – while destroying the ability of the filter creator to go viral.But they’d trained 100,000s of people to use their node AR programming system.

It’s mind-bending when you connect the dots. Facebook decides our future.