Why do people watch others play games? Why do people make their private play public? TL Taylor's answers to those questions hint at a profound cultural shift. T.L. Taylor is Professor of Comparative Media Studies at MIT and co-founder and Director of Research for AnyKey, an organization dedicated to supporting and developing fair and inclusive esports. She spoke during the morning session of NEXT19 on 19th September 2019. These are our liveblogged notes.

For millions of people now, live-streaming is a routine part of their media diet. Private play has become part of public entertainment. And it’s just part of the shift of the creative landscape.

Steaming has made it easy to be an esports fan, where it used to be hard. The audience has exploded, and the gaming companies now take it seriously. Why do people watch livestreams? There are many reasons, from getting better at games, to pure entertainment. Ambient sociability is another reason – people leaving livestreams on in the background of their lives, as once people might have used the TV.

Equally there are lots of reasons why people stream; creative expression, because they’re contractually bound as professional esports players, or as a career-building move.

There’s a bunch of skills needed, and serious streamers essentially have small TV studios at home, including green screens, sets and other tools of the trade. 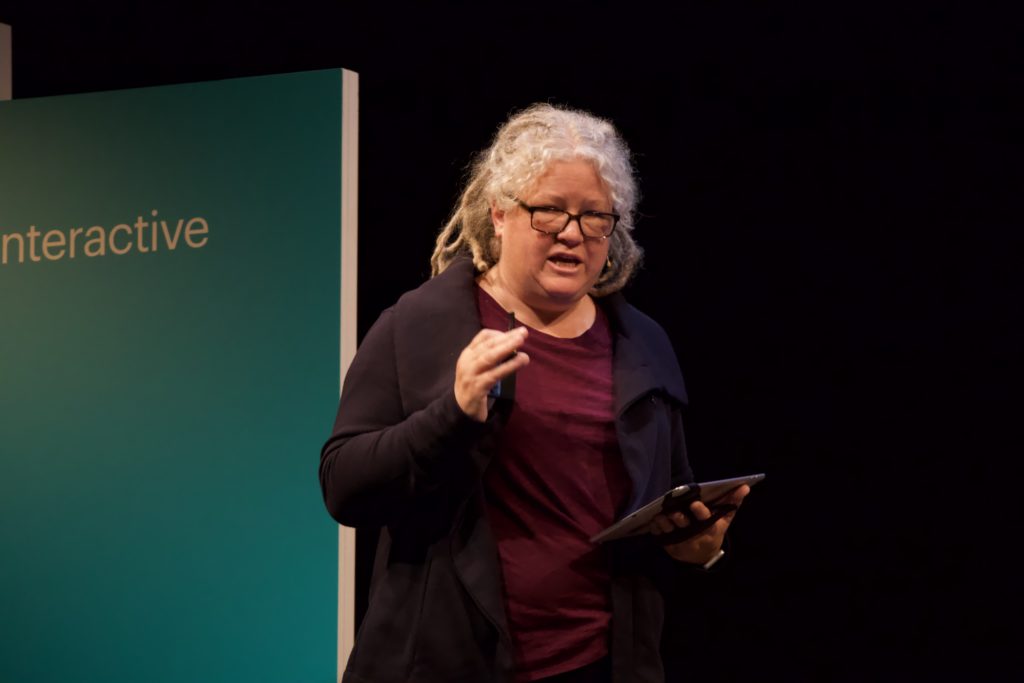 The major streaming platforms are designed to allow people to be paid for their live-streaming labour. This can be a compelling opportunity, even if a precarious one.

They are co-creating culture in interesting ways. They are layering creativity on top of the game itself. It’s no longer just the product of the game creator, but a creative work built on top of it, with the ownership complications that arise. They are a form of transformative work, bringing value and new meaning to the base work. This is a profound challenge to our mainstream concepts of intellectual property and copyright.

It’s not all positive. There is a crisis of community management. People want to benefit from the community, to profit from them but not to deal with the problems: racism, sexism, homophobia. They dampen the possibilities of this emergent media – so they need to be addressed.

Chasing after 18 to 24 year old (white) males is the standard model here – but it’s outdated. The audience is also very female (look at Smash Sisters), and gamers are aging up, not out – people play into their 50s and beyond. It’s important across racial groups and amongst the queer community. If you’re not thinking qualitatively about audience and demographics, you’re going to miss important trends.