We're in a time of transition. The Industrial Age is dead, but the new age has yet to be born. Albert Wenger argues that we have to free up attention from things that don't matter, and create spaces for a better future to emerge. 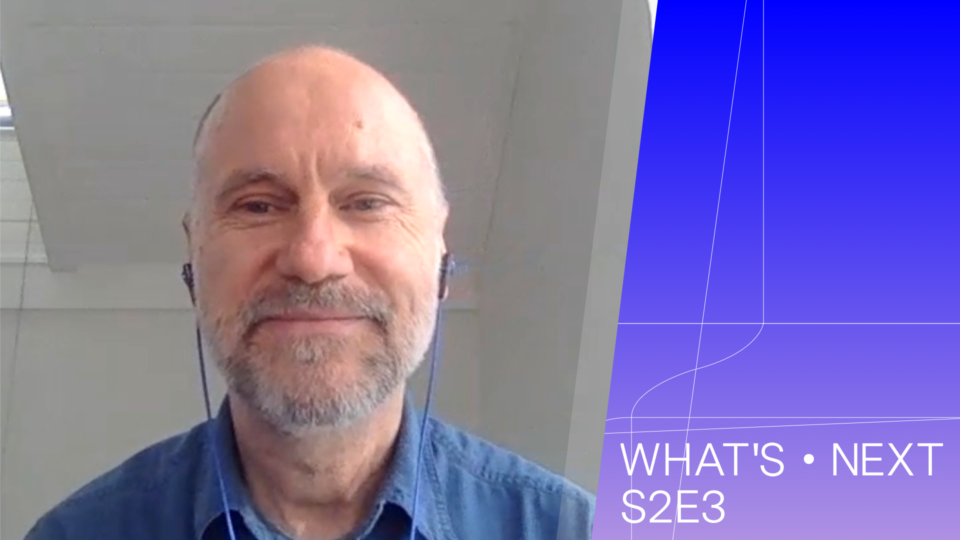 Albert Wenger is a managing partner at Union Square Ventures (USV), a thesis-driven venture capital firm. USV backs trusted brands that broaden access to knowledge, capital, and well-being by leveraging networks, platforms, and protocols. In his book, World After Capital, Albert describes the shift to a Knowledge Age — and its implications not only for businesses but all of us.

In the third episode of season two of What’s NEXT, he explored the problems that capitalism hasn’t been able to solve, how we can address them — and the desperate need to create a big vision of the future we want. You can catch up with Albert and his work on Twitter and his blog and read his thoughts in our book The Great Redesign: Frameworks for the Future.

Wenger, as a partner in Union Square Ventures, spends a lot of his time talking about what he and his partners see in the world of technology — and what they want to see. Through these conversations, ideas and theses emerge. But then, critically, they try to break these down into concrete, actionable ideas.

For example, they have invested heavily in direct-to-learner education businesses, as part of their version 3 of the company’s thesis.

The lost dream of decentralisation

However, Wenger cautions that nothing is certain with investment. When they invested in Twitter, many people were sceptical that there was an audience in “sharing what you have for lunch”.

“We were more interested in Twitter being a protocol,” says Wenger. “All the Twitter apps in the early days were third-party clients — built on an API. For various reason, that was shut down.”

That desire for open platforms was quickly denied. As Wenger points out, Facebook started in a shut-down way.

“Many people who were excited about the decentralised nature of the internet, have found themselves in this centralised place,” admits Wenger.

The path to programmability

He wants that to change and sees hopeful indications that the tide is turning. The open banking initiative in Europe is a step in the right direction, for example.

“It requires bank accounts to come with an API,” he explains. “Europe is moving beyond the data portability of GDPR, and into programmability and APIs.”

He explains the value of this with a specific example: who wants to take their friends list off Facebook just the once? It will become stale rapidly. It’s much more valuable to the user if that friends list data is available in a programmable way, so it can be accessed elsewhere.

This discussion is happening in the aftermath of the storming of the US Capitol, and the subsequent crackdown on President Trump’s online presented — and the app Parler being driven temporarily off the internet, before finding hosting in Russia.

“The internet can route around things — it was designed that way by DARPA to deal with a nuclear war,” says Wenger. “So, we shouldn’t be surprised that things on the system find ways around problems — like Parler relaunching on Russian infrastructure.”

The lack of an off switch brings a set of problems with it, as we’ve seen. But, he suggests, that’s not the situation we’re in any more. We now have five or six global switches — the big platforms and hosting providers — that can flip a switch and push things into the dark corners of the internet. They have been deputised into law enforcement.

The Problem of Platform Power

“As a firm, we’ve been very outspoken about the rising power of the platforms for a decade or more,” says Wenger. “What are the appropriate remedies to this? Personally, I believe programmability is so important in that it transfers power not to the government, but to users and innovators.”

If you can shut off things built on top of your platform, you cut off not just things like Parler, he suggests, but also the ability for users to build things on top of the platform.

However, he’s not a fan of the idea we’re barrelling towards post-capitalism.

So, if we’re no longer held back by the availability of capital, what is the roadblock? Wenger suggests that we’re held back by what we pay attention to. Should we pay more attention to the things that capitalism isn’t good at? Yes!

“People are consuming more content than ever, but they’re not asking big questions about their purpose in life,” he suggests.

The biggest problem we face is the climate crisis. The number of people working on it is tiny compared to the size of the problem.

“These things don’t have prices because they can’t have prices — this is where capitalism breaks down,” he says. “We need to free up attention which is trapped elsewhere. Many people are trapped in the job loop — they have unfulfilling jobs that they need to have to pay the rent. They’re bullshit jobs. We can and should be automating these things.”

And then there are the social networks. The market cap is almost directly related to the amount of attention they can grab. “The supercomputers are programming us,” he warns.

The three freedoms we need

Wenger suggests that there are three large freedoms we need to foster:

He’d recommend that the Biden/Harris administration in the US, who were just about to be sworn in as he gave his talk, work on some of these issues, including the universal basic income. They’d need to get rid of some subsidies, like coal and industrial agriculture, he suggests, that are counter-productive in achieving what we need to achieve.

“China and the ECB are printing money — and giving it to people who don’t really need it,” he says. “It usually makes the rich richer. If you’re going to do it — give it to everyone equally.”

The algorithms platforms are running now are one big dark pattern, he suggests. The YouTube algorithm is optimised for engagement — but that means the things that are most controversial. And so, companies need to examine their business models. Union Square Ventures has switched its portfolio towards subscription model companies, for example, which is a healthier model than third parties buying data that users generate.

“The industrial age expired 10 to 20 years ago,” says Wenger. “We saw huge changes in income and wealth distribution, and access to knowledge. But transition processes are dangerous.“

To him, the problems we’ve seen over the last decade are born of a failure to paint a big picture of the significant changes we can strive towards, rather than just managing a series of incremental changes. That’s what’s brought us to Brexit and Trump: incremental changes that don’t make most people’s lives better, and which create a narrative vacuum that allows populists to thrive.

The Biden administration doesn’t, in of itself, change the fundamental problems, he said. “They’re not just US problems — they exist in much the same form in Europe and Asia, for example.”

We have achieved incredible things, he suggested. The number of people in abject poverty has reduced rapidly. “Income inequality has spread, too, much as it did in the 19th century,” he warns. “That didn’t end well.”

The solution to that is regulation: both of technology and of ourselves, he suggested. “We need to give people the tools to work on these platforms,” said Wenger. And what incredible things they could do when they can…