In leap years we add a 29th day to February to synchronize our Gregorian calendar with the sun's astronomical course. Occasionally, however, there are events in the flow of time where we must let the calendar jump forward a few years to synchronize it again with a new reality. Covid-19 is such an event. When writing the “Transformational Products” book in 2016, I assumed that in 2020 a new cycle would begin in a very natural way in our industry. In the tech industry, we’ve been watching the emergence of new paradigms for decades that evolve along S-curves, replacing previous models. For example, the mainframe was followed by the PC, the Web, and finally, the smartphone.

All these new models looked limited and insignificant at first, but each of them created a new market much larger than the previous one. Each time the new model attracted all the investment, innovations, and start-ups and overtook the old model after some time. Each of these tech cycles shaped people’s behavior massively around the globe.

Today, multitouch-smartphones are more than a decade old, and the S-curve has bent back to horizontal. The maturity of today’s smartphones is exceptionally high, and the new iPhone isn’t fascinating because it just can’t be after a dozen iterations. So, what will be the new cycle?

Four years ago, I only had vague hypotheses about what might overtake the smartphone, as well as the latter having previously banished the PC from its throne. However, everything I thought had a chance, albeit a small one, at that time—IoT, AR, VR—never got out of the labs or remained niche technologies. Today, it’s clear that no new cycle is on the horizon to replace the smartphone as the universal remote control for people’s everyday lives and create a new market.

Sure, we’ll deploy billions more sensors (IoT) around the world. Still, a streetlight that phones home when the light bulb is about to go out is not a new platform, even if it uses a neural network for maintenance prediction (AI) and radio (5G). None of this will change people’s lives and behavior as it did in previous cycles, forming the basis of transformational value creation models and new markets. AI, 5G, and even the cloud have bafflingly become more vehicles for incremental optimization rather than the wings of Icarus with which we can reach new shores.

I had the wrong mental model back then. There will be no new device-driven cycle soon. Instead, we should look at the visible artifacts of the tech cycles and think about what changed in the underlying and invisible tectonics in each case: databases, client/server, open-source, cloud. 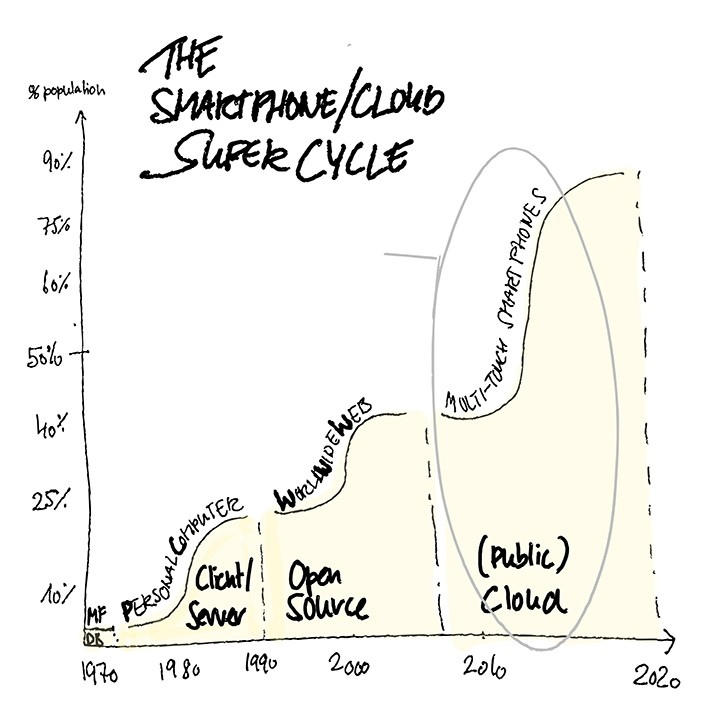 Looking at it this way, we are in the middle of what I would call the smartphone/cloud super cycle. With the smartphone’s triumph since the late 00s, we have gradually pushed our on-prem application stacks to AWS, Azure, and the GCP. The traditional CIO office is currently catching up under the “cloud-first” banner, a decade late, with what has long been the reality in the B2C-driven web/mobile ecosystem. But riding on the current “cloud-first” wave doesn’t get us anywhere. Instead we should think of “remote first”. It’s not about what we do in the cloud. It’s about what we do with the cloud: design, build, communicate, and run great experiences that improve the quality and equality of human lives.

There’s an old saying that the first 50 years of the auto industry — from Carl Benz’ patent motorcar in 1886 to the Autobahn in 1936 — was about starting car companies and figuring out what cars should look like, and the second 50 years was about what would happen once everyone owned a PC (personal car). It wasn’t until then that it was possible to move to the suburbs, work in the city, and do the weekend shopping on the “green meadow”.

In our industry, the first 50 years began with the invention of the PC in 1976. Through Corona, we’ve jumped right into that second 50 years five years earlier and are experiencing what happens when everyone uses the digital tools that were already rolled out. The road infrastructure is sufficiently built (cloud), the cars are near-to-perfect (PCs/smartphones). In the last few months, we’ve got our first glimpse of how quickly people’s behavior can change. Unlike the automotive age, only the vector has turned 180 degrees: people no longer drive to the atoms, but the data to work, communicate and consume flows to the people in the “remote first” age. The new imperative: everything that can be done remotely will be remote in the future.

The ”remote first” paradigm is a sea-change: for many companies in the BEACH industries (Booking, Entertainment, Airline, Clothing, and Hotels), it is partially fatal. But for a large portion of businesses, 2020 was the uncovering of new opportunities for the future and the starting point of a digital land grab. In the U.S., i.e., e-commerce sales have grown 50% in recent months. Companies will seek to aggressively defend or expand their market share in this new competitive arena for the near future.

Many companies in Europe will invest massively in their direct-to-consumer/business channels in the next 1,5 to 2,5 years and services in this sector will grow massively. Even in Germany, companies as well as the public sector will really put their foot down. Many of us have spent decades working towards this: to create stellar experiences that can improve people’s lives and move the needle in our companies or in our client’s businesses. It’s going to be exhausting but it is a once in a lifetime opportunity for all of us working in this field.

Simultaneously, the pandemic will keep us even busier than it did last year. I personally believe not 2020, but 2021 will go down in history as the Corona year. With most infected, deaths, and restrictions. Unfortunately, until we are all vaccinated — and that may take until late summer/autumn — things are likely to get worse rather than better.

We will be looking at the best of times and at the worst of times in many aspects. The NEXT Team and I wish you lots of energy, drive, courage and empathy and most of all, health for you and your loved ones in 2021.

Photo by Manny Moreno on Unsplash