Apple is about to disrupt the attention markets

Cross-site cookie tracking is terminally unwell, and Apple is about to delivery a mercy killing. Will this crash the attention markets — or reboot them? If you buy or sell attention, hang on tight. Things are about to get bumpy. One of the challenges — and delights — of working in digital, is that things rarely stay still. Multiple things can trigger that change: an innovative product, legislative intervention, or, sometimes, a move by a single player who ends up reshaping a market.

Today, that player is Apple, and they’ve unilaterally decided to shift the market for attention. In the next few weeks, iOS 14.5 will hit the huge installed base of iPhones (and, to a lesser extent, iPads). It will make it much, much harder for the big attention aggregators to track individuals across the net.

This sounds like a boring technically change, or perhaps even a clever privacy-centric marketing ploy from Apple. But it’s more profound than that. It could, in a short space of time, upend the entire attention economy. If you are an advertiser on a Facebook platform, you’re probably aware of how worried it is. The social network is messaging relentlessly and negatively about the change.

The internet is a global attention market

To understand why, we need to acknowledge some fundamental truths about digital that don’t change. For example, the internet has made information abundant, and therefore attention is always going to be scarce. Hence, there will always be opportunities to monetise scarce attention.

Both services can use the information you give them to refine that targeting, and thus charge people more for the advertising. And then they’re able to deepen their knowledge by connecting this up with other data from other sources, turning you (or rather, your attention) into a marketable resource. Martin explored the mechanisms behind this.

Apple is about to drive an exquisitely designed, sustainable, low-energy and recyclable bulldozer through those business methodologies. Its dry run on the Mac has already hit ad rates hard:

CPMs for Safari users have fallen off by around 60% since ITP was introduced in 2017, according to ad tech firm Index Exchange.

Google’s response is to stop worrying about you as a person — or, at least, as a person who is identifiable by a cookie. Instead, it’s going to lump you in with other people who behave like you:

The Federated Learning of Cohorts (FLoC) is a privacy-focused solution intent on delivering relevant ads “by clustering large groups of people with similar interests”. Accounts are anonymised, grouped into interests, and more importantly, user information is processed on-device rather than broadcast across the web.

Variations of this sort of approach have existed for a long time. If you’ve used the demographic data in some web analytics packages, that’s exactly what you’re seeing. In Google Analytics, it’s Google’s best guess as to who your users are, derived from their behaviour. There’s actually a page where you can go to see both the data Google has learned about you and the assumptions it’s making based on your behaviour.

The limits of attention cohorts

This has certainly got better over time. It used to consistently misgender me, but it has since successful identified me as a male between 25 and 54 years old (but that isn’t exactly tight demographic targeting…). But equally, there’s some baffling information in there: I’m interested in dogs? Has my five-year-old been Googling from my computer? (No.) Flowers? Uh, no.

And this is just baffling: 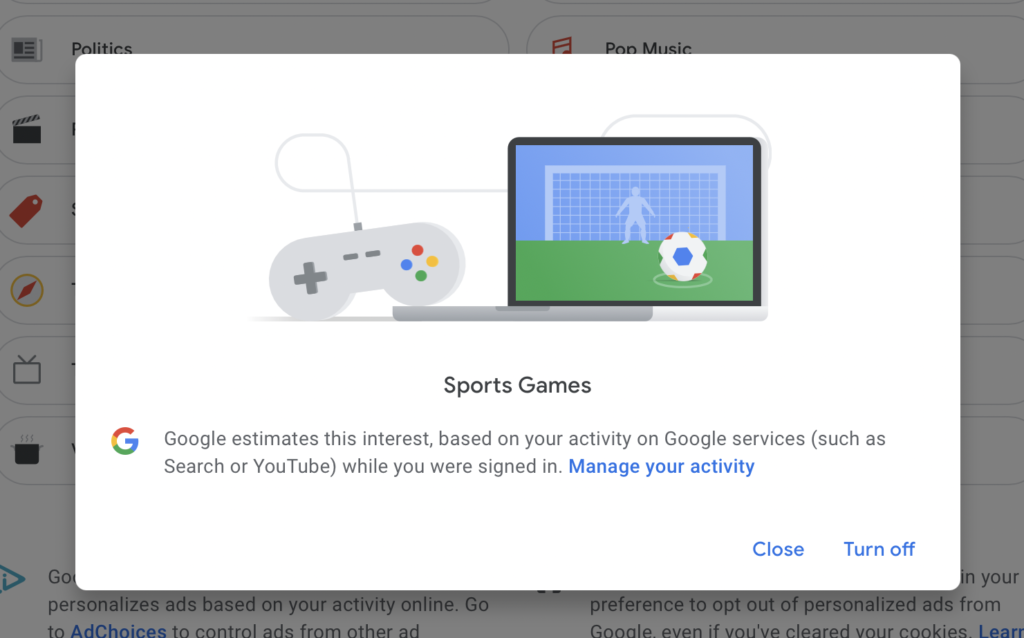 I cannot remember the last time I played a sports game…

So, there are clearly some accuracy issues here, which they’re hoping to offset with the machine learning approach. But equally, this is perhaps less privacy-secure than some people would hope. The EFF is less than impressed:

… each user’s behavior follows them from site to site as a label, inscrutable at a glance but rich with meaning to those in the know. Their recent history, distilled into a few bits, is “democratized” and shared with dozens of nameless actors that take part in the service of each web page. Users begin every interaction with a confession: here’s what I’ve been up to this week, please treat me accordingly.

One could easily imagine an arms race developing. Google and Facebook come up with new ways of tracking users, and Apple attempts to shut them down. This is not an attractive future vision of the attention markets.

Buying yourself out of the attention markets

However, these changes do not happen in isolation. People’s attention is precious to them, and people are slowly coming around to the idea that maybe they should pay money to make better use of it. This manifests in several ways: the boom in subscriptions for newspapers or email newsletters, for example. Or even the rise of subscription box services that mean, for example, you don’t need to shop for washing supplies or socks: they just turn up through the post every month or so. (I will confess to subscribing to both of those services.) That’s a chunk of your attention freed up for a small recurring fee.

As more sites monetise through these routes, the supply of certain types of attention becomes more scarce. It’s either travelling into spaces where you can’t reach people (behind a paywall, with no advertising hosted), or because that category of attention need has been quenched by a recurring service.

The platforms have a nightmare scenario in mind.  Other services top-slice the most lucrative areas of attention, leaving them with the poorer, less rewarding attention. And they’re also no longer using the highly specific targeting tools, instead bundling attention together in these packages of attention that look valuable. Instead, they’re using protected on-device tech and proprietary machine learning to bundle ads. That makes these attention bundles rather opaque.

And this is getting us uncomfortably close to the situation that triggered the 2008 financial crisis: the buying and selling of poor-quality aggregated financial products. As Tim Hwang put it in his prescient book from late 2020, Subprime Attention Crisis:

This matters because opacity allows market bubbles to form. In the mortgage crisis, the complexity of the market in exotic financial instruments made it challenging to see that the underlying mortgages were extremely likely to default. If buyers had known that AAA-rated mortgage-backed securities contained so much bad debt, it would have been challenging to get anyone to buy the assets.

It doesn’t take much imagination to see how opaque aggregations of attention, determined through closed machine learning systems could create transactions whose true value was very difficult to determine.

While this is unlikely to precipitate a global financial crisis on the scale of 2008, it could still be a major tipping point in the digital economy. Would Google be so ‘generous’ with so many of its free services we use today if it couldn’t monetise them easily? How will Facebook cope when its ability to target ads diminishes? It’s at inflection points like that that mistakes can be made that ruin user experiences, and trap products into a spiral of decline they can’t escape.

And there’s one uncomfortable thought for us all. The discourse around global politics suggests that the current form of the attention markets is profoundly toxic. Would a crash in the market for subprime attention actually be a bad thing? Or do we see the sort of market correction that unseats the incumbents? That reboot allows new challengers the space to rise. That’s an intriguing possibility.

Photo by Gigi on Unsplash