The Coming War Between Labour and Capital

Trend researcher David Mattin says the Global North is ready to return to work. But trouble between capital and labour is looming. Across the Global North, vaccination programmes are taking effect.

One consequence? In their millions, citizens face a return to normal working conditions. But no one really knows, anymore, what normal should look like.

For knowledge workers, lockdowns shattered the vast edifice of ritual and routine that existed around the working day. It meant a stark reminder that those arrangements – and the power structures that underpinned them – are not given. They’re socially constructed. Perhaps, if enough of us wanted it, we might get rid of them and build something new.

Recently, I was struck by two stories that tap into the Great Return to Work. Stories that offer powerful signals of what lies ahead.

My contention: the conditions are set for a new clash between labour and capital in the 2020s.

I’ll get to that at the end. First, those stories, and a reflection on the broader context that informs this idea.

What Do Workers Owe The Man?

Google says staff must return to the office full time by September. Word on the street is that many employees aren’t having it: 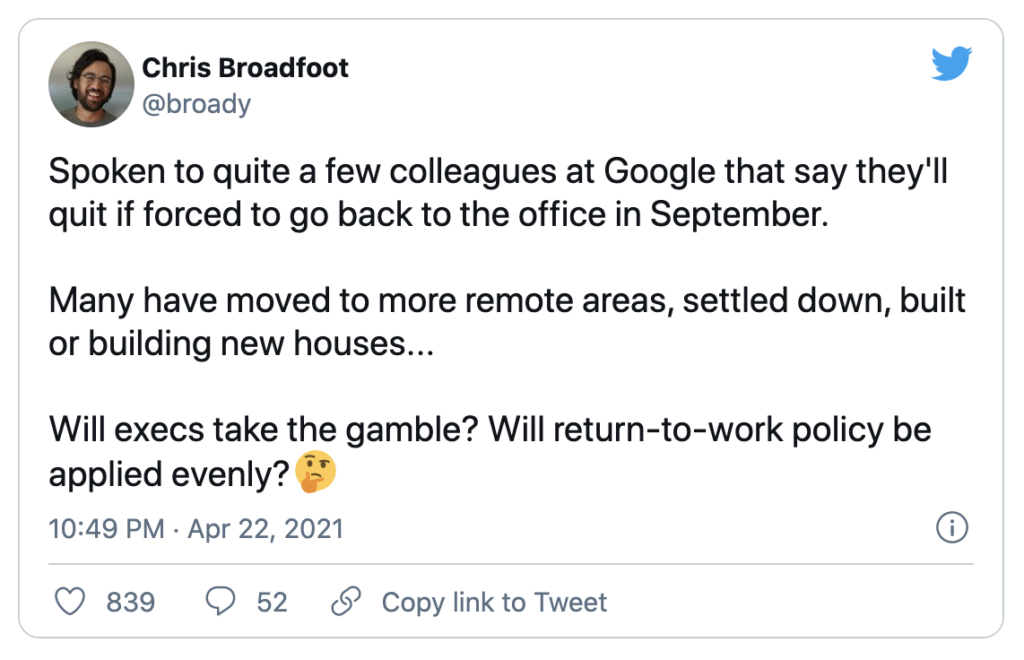 Evidence suggests that resistance to the idea of a return to offices isn’t about a desire slack off. Many knowledge workers report grinding out longer hours during lockdown. Despite that, in multiple surveys workers have expressed a preference for a hybrid work model from now on.

So what’s going on?

Control, surely, is the central issue. Lockdowns made real a world in which knowledge workers are left alone to manage their own schedules, and deploy their physical presence as they wish. Now, most want to retain that control. That means coming to the office when they decide it’s worthwhile, not when they’re told.

Meanwhile, company leaders are growing increasingly concerned by evidence that organisational creativity declines when people don’t constantly mix with one another in shared physical spaces.

All this raises fundamental questions about the relationship between employer and employee. When you go to work for a business, what are you promising? To complete a certain set of tasks? To be in a certain place at prescribed times? Or to work a certain number of hours?

Right now the legal answer is something approximating: all of the above. It’s been that way for so long that few ever stopped, in the before times, to question whether it really made sense. But in the 2020s, these issues – what do I owe the man? – will be on the agenda as never before.

The TL;DR: CEO Jason Fried banned ‘political and societal’ discussion on company channels, after growing frustrated with a number of his employees. Many staff weren’t happy. On Twitter, Fried was accused of leveraging his privilege to force group acceptance of a status quo that benefits people like him (rich, white men).

Things escalated fast. Around one-third of Basecamp employees have accepted a buy out that will see them leave the company. 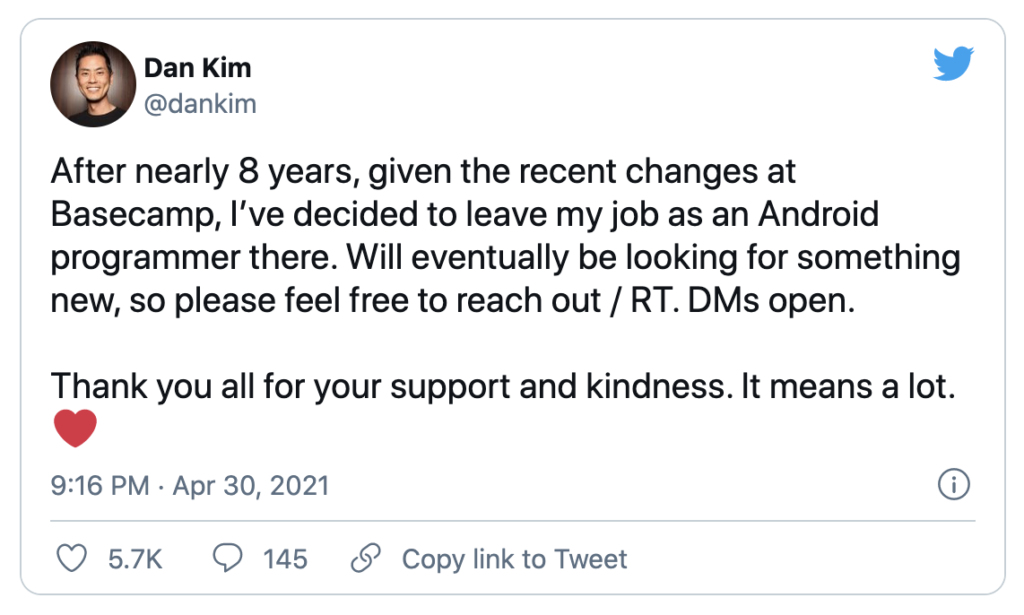 Why does this story have implications far beyond one small software company?

The pandemic wasn’t the only transformative event of 2020. The summer’s Black Lives Matter protests signalled the arrival into the mainstream of an overlapping, and often uncompromising, set of movements for social justice.

As that shift unfolded, workplaces were empty. But now, millions are returning to offices in a world that feels as though it’s shifted on its socio-political axis.

The underlying truth here? We’re living at a transitional moment: an old world is falling away, and a new one is being built. The culture wars that are raging right now – and that swept through Basecamp this week – are one powerful signal of this change.

Some version of what happened Basecamp this week is, surely, about to play out inside a whole lot of other organisations, too.

Is Work Still Worth It?

A quick look at the broader context here.

The one-line summary: work doesn’t pay like it used to. Across advanced industrialised nations the share of GDP going to labour has fallen across the last 70 years. Here’s that story in the US: 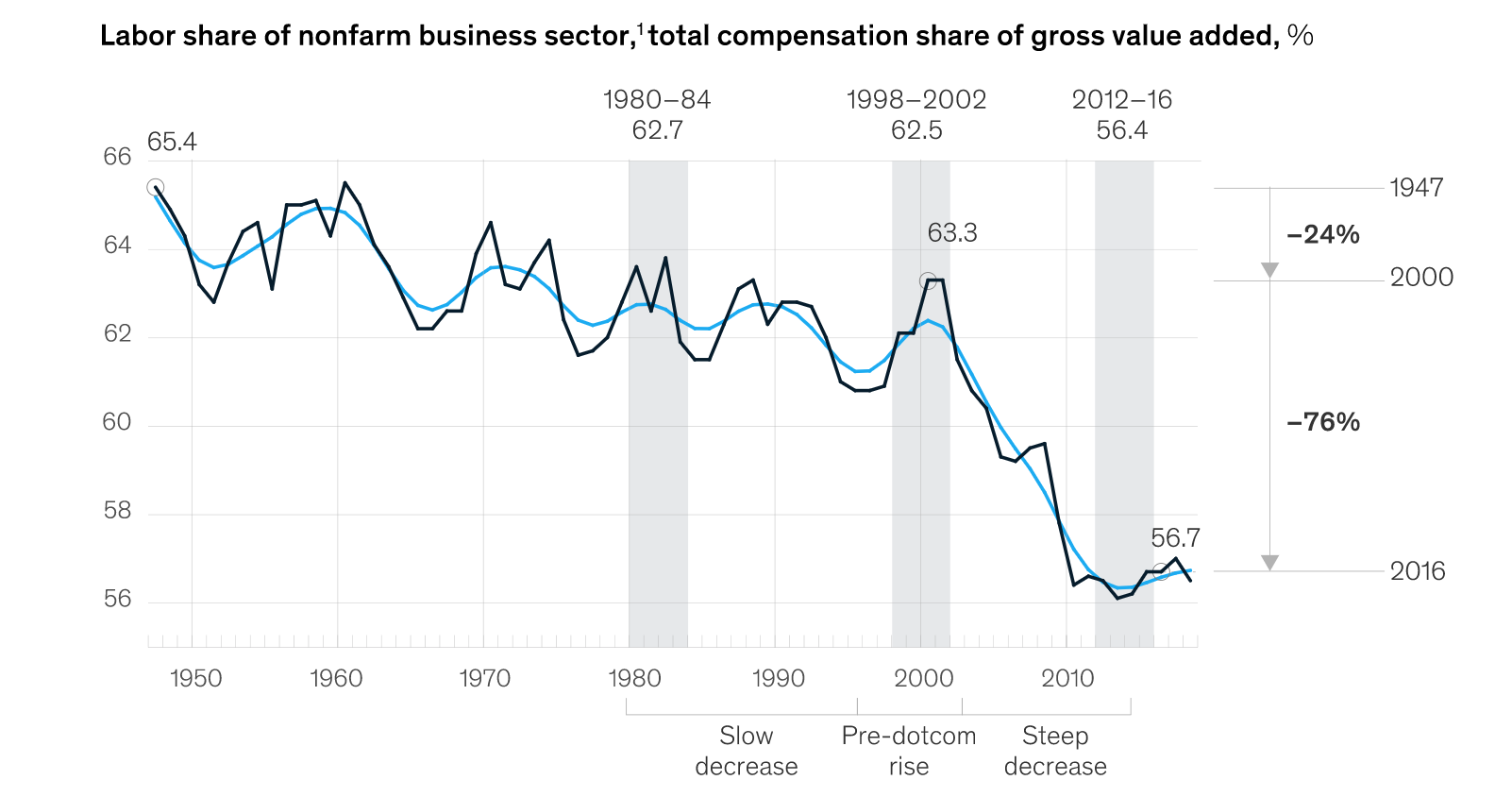 The decline on returns to labour mean owners of capital – who are typically older – are accelerating away from everyone else. Back in the late 1990s when US baby boomers were entering their late 30s, they owned 21% of household wealth. Today, US millennials own 3% of household wealth.

The wealth owned by older people won’t disappear when they die. A huge generational transfer of capital is coming. But it will benefit only a few: those with rich parents.

This is a set of circumstances that further diminishes the economic power of labour. Getting to the top – economically, that is – becomes more about choosing the right parents than it does about succeeding at work. Advanced industrialised societies like to think they’re meritocratic. But they’re increasingly calcifying around hereditary elites, and the rest.

No wonder young people are turning away from traditional career paths and towards alternate routes: Financial Independence Retire Early (FIRE), crypto speculation, and the creator economy.

Labour and Capital: What Lies Ahead?

There hasn’t been a moment like this in living memory. Across the Global North hundreds of millions will soon return to places of work; and they’ll do so in a world changed by the pandemic.

The relationship between capital and labour has long been due a revision. Now, it’s set to be tested in all kinds of new ways.

Think questions around control of schedules and physical presence. An inflammatory debate about politics, self-expression, and free speech in the office and online. All fuelled by a generation who believe, with due cause, that the system is stacked against them.

When we talk about politics in 2021, we’re often talking about forms of identity politics: the search for a revised social contract around race, gender, and more.

But my prediction? The conditions are all set, in the 2020s, for a 21st-century version of something rather old-fashioned: a clash between capital and labour.

In truth, this confrontation has been brewing for a while. See, across the last few years, the wave of activity around unionisation in the North American tech sector. But in the wake of the pandemic workers sense a greater need – and a unique opportunity – to press their case.

No one has a crystal ball; we can’t know how this clash will play out. But it is surely coming. And it will do much to shape the years that lie ahead.

Please note: This article was first published in the newsletter ‘New World Same Humans’ by David Mattin. You can subscribe to it here. If you’d prefer to listen, go here for the audio version of The Coming War Between Labour and Capital.

Photo by Firos nv on Unsplash