The fuss about the acquisition of photo-sharing app Instagram by the mighty Facebook has been washing around the internet for several days, not least because the deal values the company at a staggering $1bn.

Some think that it's a good idea, others that it's part of Facebook making itself look good for its IPO – and these are just two of a range of opinions.

As a long-term Instagram user, I've blown hot and cold on the news, fearing that Instagram would go the way of so many Facebook acquisitions – shut down. But I've come round to cautious optimism, because the possibilities of an injection of Instagram's DNA into Facebook could make for a radically improved social networking experience. 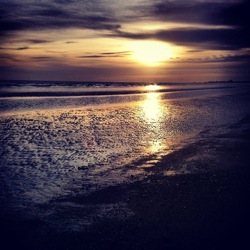 Facebook does the former reasonably well – it's well known to be the biggest photo-hosting site in the world. It doesn't do the latter at all. How has Instagram made it work? The creativity element is encouraged by the filters built into the app. While the reflexive joke many people make is that it's making a beautiful photo shot with a modern camera phone into something that looks like it came from a 1971 toy camera, that's missing the point. They're more like a set of editing presets that can create a whole range of moods in interaction with the original image.

But that's only part of it. What really makes it work?

People can search for (or click on) hashtags in any comment on a photo, to see all the photos tagged with the hashtag. For example, here's the Berlin stream: 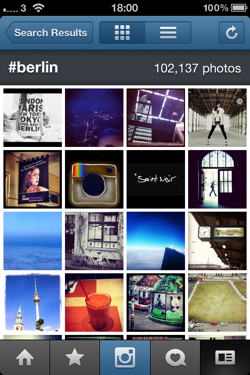 It's this curious mixture of art and personal co-existing in the same stream that makes Instagram so compelling, and which has differentiated it from earlier filter-based apps like Hisptamatic. Facebook has an obsession with reducing friction – hence the “frictionless sharing” that it introduced recently. What the Instagram team did was introduce frictionless creativity. The DSLR-toting, Photoshop-wielding art crowd may look down on this, but they'd miss they point. This is mass-market creativity, and there's nothing at all wrong with that. It doesn't invalidate more involved forms of creativity in any way. It's upgrading the prosaic, not downgrading the artistic.

Imagine that vision of frictionless creativity added to Facebook. Imagine video and photo sharing which is not just fun sharing, but also an expression of the creative urge. And, just possibly, imagine it as a beginning of a more public front for Facebook, where you can explore public share of photos and videos around hashtags. Instagram has long lacked a web interface. Could Facebook become it?

At its best, this acquisition could bring a whole new vision of creativity to social networking. Rather than a bland representation of what is – which is what so much Facebook sharing is right now – the act of sharing has the potential to become an act of creativity, too. And that's exciting.