Two talks: one on doing business by reputation and one on helping women get to the forefront of tech Two fast talks, with no more than 20 slides. Buckle up:

(Jan is the founder of six companies – reprinting about 400 jobs, before he reached the age of 30. They’re looking to hire 50 people.)

2013 is the time when everything becomes hyper fast based on the mobile internet age. But we should go back to the old school principles of how business is done. The world speeds. Internet growth has already been fast – but mobile internet is growing faster. Speed is the key. 99% of organisation are not ready to adapt to that speed. One way to adapt is to go back 1000 years in the way business done. Contracts are the number one reason we’re slow. If you want to be fast, learn from the past.

Back then, markets were small. They were a small community of people who knew each other – and knew they would do repeated business with each other. That meant they had no incentive to cheat, because that would have been punished by the market. A bad reputation meant you were out of business.

By 2000, markets had become global and transitions had become anonymous. It was a golden age for lawyers – they made sure you got your right, but contracts gee unwieldy. Social networks make the world a very small place again. It’s easy to look at reputation of potential business partners. It’s not a 10 minute job to check reputations. It becomes more positive than contracts.

If you’re not fast, you’re out of business. He likes those consequences – because he’s fast and he does business based on reputation and a simple handshake. 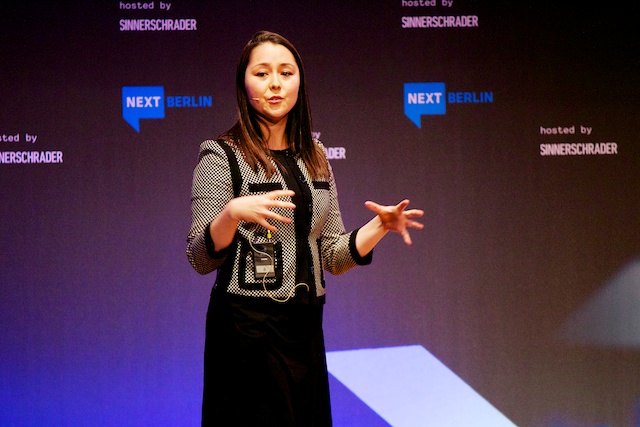 Two years agio he attended NEXT – and only sw 7 women in a  room. She’s impressed how much that has changed. Diversity is important. We need to bring people together from all over the world to deal with problems. Where are the women with fabulous ideas? She wanted to build a community around them. The most important factor in the ever-changing world is technology – so she founded a non=profit called Berlin geekettes. Thy started a series of workshops, from pitch training to how to reprint yourself in the media. They started a blog to highlight the women involved. They brought a team together.

Next? They started a mentorship programme back in November, and they’re launching it with Google this spring. She partnered wit other similar organisations. Building together makes them more noticeable. They had Germany’s first all woman hackathon. They shattered a lot of stereotypes with that.

She wants it to be 1,500 women by the end of January. Maybe one day it will spread beyond Germany. They partnering with universities to bring more people in. After that? Munich, Hamburg, Cologne…

Lean Forward completely catches it. We need to train and mentor women in technology. Everything offline is moving online – and women need to be at the forefront of that. Until we catch up, the ideas won’t be as good as they can be.