The Invisible World changes our world

Technology is changing the world around us. New connections enable new ways of using the city and new forms of relationships. Three talks from NEXT Berlin 2013 explore this theme… Liveblogged notes from the Invisible session at NEXT Berlin 2013

Martin Spindler – the weird is yet to come

There was a small scandal in the UK when a company selling t-shirts created an offensive one through its algorithm. The advert was seen, but no-one realised that the t-shirt didn’t exist until it was ordered. An algorithm was responsible for 4% of trading on a stock exchange. People were talking about its agenda.

There are unexpected consequences. The web started as a better document access system. It was  a better library, if you will. By 1995, Newsweek was saying that the internet wound’t change that much. They were very, very wrong. It’s changed newspapers, government and education beyond recognition. MOCs – Massively Online Courses – are all the rage.

But we still don’t see things coming. We have accessories for our iPhone, and we have lightbulbs we can control via your phone. It’s great – but as soon as your light switch is off, it stops working. And switching off the lights is ingrained in us.

The Jevons Paradox states that technological progress that increases the efficiency with which a resource is used tends to increase (rather than decrease) the rate with which it is used. That means that it’s now cheap enough to put a table above a urinal. But it also means that we started creatively wasting computer resources on things like visual interfaces.

We need to stop worrying about connectivity, and start worrying about what we do with it. Shirky pointed out that communications tools only become socially interesting when they become technologically boring. Stop worrying about the technology – the game is about getting it into people’s hands and seeing how they use it. Consider connectivity solved. Too many people think “let’s connect this and then do an iPhone app”. He doesn’t want that – he wants his Xbox hooked up so an on-screen explosion is reflected in the room’s lighting.

Ugle is a connected owl, that just changes a little based on your actions in an iPhone app. It’s up to you to assign meaning to the moves. The idea of self-driving cars is a huge relief to him as a cyclist. We’re not looking at the social impacts yet, though. Jan Chipchase is worth reading on this. he suggested the idea of car surprise – when you find your car doing something unexpected, like picking up flowers at the mall. Trailer Trashing – where dodgy looking vehicles follow you around… 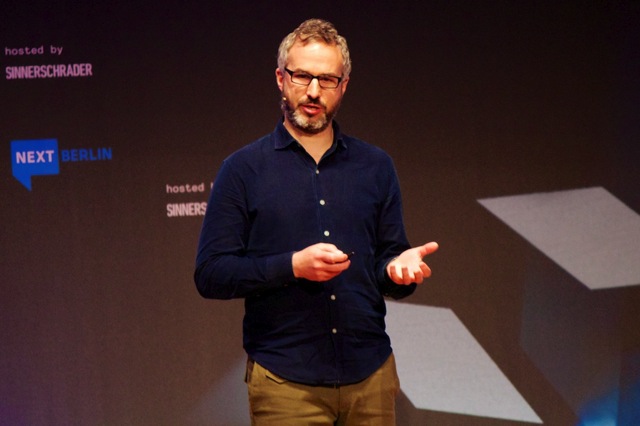 Three failures: He was involved in a project called the Cloud for the Olympics – it came second. It would be a civic smart meter. UTS Broadway in Sydney would reflect the digital activity within the building on the outside. The Sydney Metro project was cancelled by a government changed, but would have created realtime metro network activity screen – and phone based monitoring of how busy carriages were.

We have the technology to do anything, he suggests. look at what Germany has done with wind power. The problem isn’t technical. A good idea or a technology isn’t enough on its own. To make things happen you need to turn to design and redesign the context, the decision making and the question. For large scale decisions, we look to institutions to frame the questions. But institutions are collapsing. The riots in the UK were a complete break down of the relationship between society and government. The Occupy movement is another example. The Arab Spring movement is linked. The piazza and social media work together as an enabler. People have lost faith in institutions to deliver decisions.

Independent politicians are beginning to avoid traditional media and build followings piazza by piazza. A skate art project in Helsinki lead to complaints about noise, and a different part of the government digging a hole around the art, vandalising the city’s own work. And then there were complaints about the complaints, and they had to go and fill it in again. In the same city there was a street food festival – Restaurant Day – born out of frustration with how difficult it was to launch a restaurant in the city. They don’t have permits, but the city can’t touch it because it’s so clearly civic good and they’d end up as pantomime villains if they tried.

We need to understand what public space is. It’s not just the city council’s decisions. In Berlin there are people looking after the planter blocks themselves. Not legal – but clearly good. It’s hipster urbanism, yes, but Government now has competition. It’s an emergent behaviour which gives the city nothing to arrest. The movement build apps on four platforms, while the city created horrible future of the city online sites. Their heart’s in the right place, but they don’t have the weapons.

But we still need the city. Popups pop down again. They don’t change things. Small pieces loosely joined doesn’t do enough. So we have to redesign our institutions.

The Shanghai Expo had multiple examples of city control rooms, where the central authorities controlled the city like greek gods. This is the same rhetoric as the 1950s. Some of our cities are the cities that cars built when we weren’t looking. In 1906 Syndney was a much more fluid city in terms of its streets. They were a mix of fast and slow, with soft boundaries to areas.

We don’t makes cities to make infrastructure. We makes cities of culture, commerce, community and so on. These are all inefficient things. There are other ways of working with citizens. Holland has shared spaces, which have uncontrolled junctions – they have fewer accidents than those with traffic lights. People have to negotiate the space between themselves.

We have to understand the bias and limits of the process – but also of things like social media. It’s not democratic. It’s easier to crowdsource a revolution than a light rail system. Let’s not load too much on the emergent camp. Can we transform NIMBY to YIMBY? Brick Starter – chucking the social media paradigm at the city. This investigates trying to mix top down with bottom up. It’s not side-stepping institutions, but reshaping the way cities work.

Yes, we need active citizens (the piazza plus Facebook). But we also need active cities. We need to adress public good and figure out what the city is for. Design to ask questions – capture inefficiency and drivers, not just enablers. But also design for scale. No more popups please. 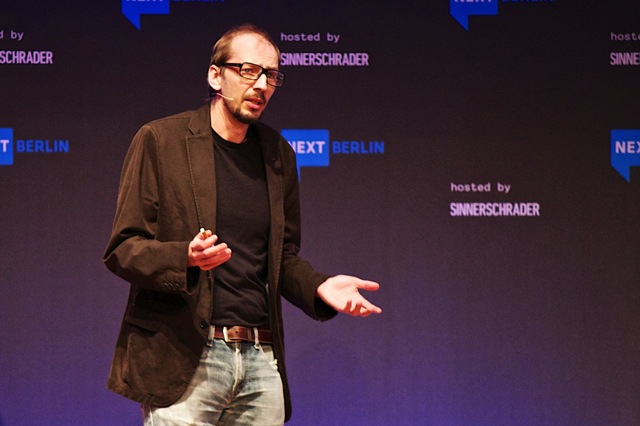 Storytelling is the dominant technology in any project. Technology creates stories. 3 years ago he creates weavrs – you fill in a profile for a fictional character, or someone a bit like yourself. It creates a blog, and then wonders around looking around for interesting stuff and posting it to a blog. It’s not very intelligent – it just searches APIs looking for keywords. But it has weird psychological effects. It’s not alive or dead, but it’s performing actions people perform. There’s something very curious about the idea of this invisible orbit wandering around you. We’ve all heard about the filter bubble. Facebook ends up just recommending the things to you it knows you’ll like. They created Weavrs based on Alice in Wonderland and let them lose in Berlin.

Dunbar’s Number states that you can only manage about 150 relationships. This is a hard limn it based on biology. The bigger the brain. the more relationships you can handle. And those relationships can be with “dead” objects, too. Brands know this – they go for the coational and friends sector. They never go for family – that’s too closed. Twitter lurks in the ground between your social crowd and your vocational crowd.

Their are four things for a healthy life: mating, health, navigation  and growth. These can be mapped onto the four default icons on the iPhone dock. We keep falling into the hero’s journey for software design – but it was designed to build worlds. The Ludic Fallacy means that youc an’t have all the data. The Roomba can’t see the whole room and will always miss a bit. Iron Man is constantly upgrading his suit – it can never be perfect. The uncanny valley emerges when robots get close to looking like humans but not quite close enough. Desigers take products and tame them in the climb from the valley. Storytellers are trying to create feral worlds. Interfaces with agency solve problems by building worlds. Weavrs are living allegories who build worlds. That’s the weirdness of data – but he’s getting more and more interested in it. Noisy Jelly is worth watching. It’s jellies that you can play like musical instruments – but they’re jelly based robot things. More fun that tapping a piece of glass all the time. Something about having answers at your fingertips is playful. Can you put bot like mentalities on every fingers? Literally digital media?

Hack days are almost religious – its the ritual of getting together to make things. Could we cook a robot on a Sunday afternoon? A single feature robot you could knock up in the microwave. Could Intel build us chips in eggs, so we could whack up a robot? How do we start dreaming about technologies?