Beyond the battle to be the leading messaging platform lies a more subtle battle: to become your personal digital assistant Does anyone remember the idea of the personal digital assistant – the PDA? That’s what devices like the Palm Pilot and the Handspring Visor were described as back in the early 2000s. As a category of devices, they’ve long been replaced by the mobile phones, which has become our go everywhere companion.

But the PDA is slowly making a comeback. As Siri gets ever more capable on the iPhone, she’s slowly evolving into an assistant who can help you get things done in your life. And she’s far from the only game in town:

M has my credit card information, so when I tell it to buy things, I just need to hit “get” and “pay” and it’s off to the races. M knows my home and office address, so when I tell it “ship to my house,” it knows exactly where to direct the package. M knows the names of my brothers. It knows what sports teams I like. The list goes on. 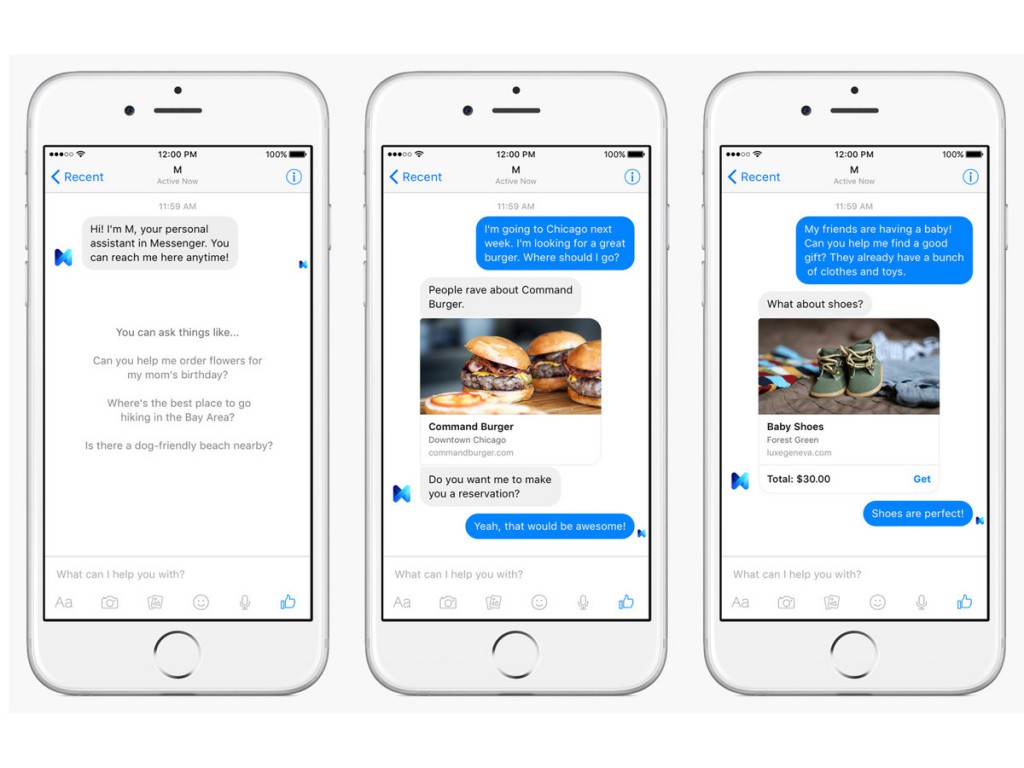 What is M? It’s a digital assistant that Facebook is building into Facebook Messenger. Right now, it’s just an experiment – but one that’s growing fast and might find its way to more of us in the coming months. According to Alex Kantrowitz’s article for Buzzfeed, M is an AI being careful shaped by “trainers” – like a child being educated by teachers as it faces new challenges in life:

The trainers are a group of a few dozen human contractors working in Facebook’s headquarters. These humans, as Marcus explained it, review each of the AI’s responses and decide whether they’re good enough to pass along, or whether they need revising. When the trainers revise, the AI watches and learns: “With every single one of these interactions, that data is fed back into that AI instance that will then use the data to learn how to automate more and more answers or how to get better and better at those things,” Marcus said.

What’s interesting about these moves is that they move beyond an app in the conventional sense. Siri is on your phone – but isn’t an app you launch. In the latest iPhones, she’s always listening for you. M – if and when it launches – will be available anywhere you can access Facebook.

We’ve already seen sites like Facebook become front ends for the web, become an intermediary layer between us and the content out there. This does the same thing for the rest of the world, providing us with a digital servant that tries to smooth our lives.

Echoes of the digital assistant

Apple and Facebook are far from the only players here. Amazon has its Echo device, which allows you to shop via speech, and the underlying tech is moving to its Fire tablets and TV devices. And, over in China, [WeChat is steadily becoming the front end to a whole range of commerce](http://digiday.com/brands/wechat-mobile-commerce/):

A diner eats with a group of friends and splits the check by sending a QR code out to his party — each of whom can automatically pay their portion of the bill with the tap of their phones. That same diner can use that very same app to buy movie tickets after dinner — and then hail a cab home at the end of the night.

That’s not all, either. The same single app lets him create a pair of custom Nikes, send an order to the nearest Starbucks, browse Burberry’s latest runway collection, count the number of steps he takes each day, plan a family vacation, upload and share photos with friends, order delivery, host a conference call and keep up with the news.

Much has been made of the rush to own the messaging space. But behind that is a much more fundamental and important challenge – the quest to be people’s preferred digital assistant. If you win that, then you become the intermediary between a user’s life and the rest of the world. And that’s a very powerful place to be.