We surrendered digital to the financial markets in the 1990s, argued Douglas Rushkoff during his interview on 'What's NEXT'. The current crisis offers us an opportunity to rethink everything from media to education. Here's how. 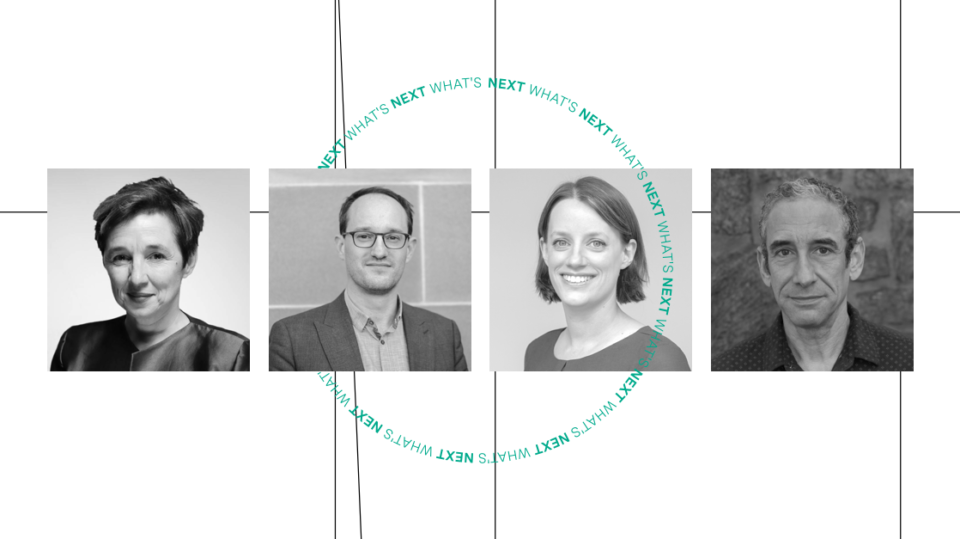 Douglas Rushkoff’s work explores how different technological environments change our relationship to narrative, money, power, and one another. He’s a research fellow of the Institute for the Future, and founder of the Laboratory for Digital Humanism at CUNY/Queens, where he is a Professor of Media Theory and Digital Economics.

During the sixth episode of ‘What’s NEXT’, he explored how the pandemic wasn’t the society-changing event the most powerful were expecting — and how it offers us multiple opportunities to re-engineer how we live to make it more profoundly human.

One of the most compelling stories in Douglas Rushkoff’s book Team Human was about him giving a talk to a small group of wealthy people – and all they wanted to talk about was how to keep their security team loyal when the big event that crashes society hit. This is the moment that it all begins to fall apart, suggested Rushkoff – but it’s not what they were preparing for.

He believes that their fantasy is being able to build a car that can drive fast enough to escape their own exhaust, or to build a technology that’s alienating enough to distance them from the legacy of human suffering and slavery. Everything they have externalised becomes everyone else’s problem – and they can just go on as they like.

However, he also thinks that they’re only dedicating about 20% of their resources to plan B – the escape plan – and 70 to 80% are still going into making all this work out. And it is going to need work.

Covid could be the beginning of a cascade of issues we have to address, he argued, from other pandemics, to economic collapses, to climate change, to the race and gender problems. There’s only so many global epic disasters that we can fend off simultaneously using western science and technology aggressively as our only tool.

The virus and the economic problems are interesting, because you can look at them as excuses for those who want to separate themselves from the human organism. Being “just one of us” is so horrific to some people, suggested Rushkoff. The whole messy business of connecting with other people, being moist and squishy, looking into other people’s eyes and all that is so alien to their society.

This all goes back to Francis Bacon, and his idea that science would allow us to “take nature by the forelock”, hold her down and submit her to our will. It’s basically a rape fantasy, said Rushkoff. We’ve finally got to the point when we realise that nature is bigger than us. We can’t control it.

But fighting Covid-19 means being less human – no handshakes, no hugs, and people who are infected lose their sense of smell and taste, countered Monique.

Rushkoff agreed that Covid-19 has forced us into a harsh, anti-social world:

“We have to dehumanise in order to not transmit this disease. But after that, we’ve got to rehumanise more than ever – we’ve got to reconnect with each other in ways that re-establish local resilience, local business, local manufacturing, cottage industries, circular economics: all the stuff we can’t do right now because we’re stuck in this cycle of disinfecting ourselves.”

If we don’t do a course correction as soon as we’re allowed to come outside, we’re going to become like big agriculture, he suggested, which is addicted to chemicals to keep the cycle going.

In the mid-90s we surrendered digital technology to the needs of the marketplace, argued Rushkoff. It could have engendered a more circular, more distributed economy, where anyone with a laptop could start a business. But, instead, it ended up serving the stock market as it currently exists, he argued.

“That’s been good for creating short-term exponential growth – and for creating a few billionaires. VCs come along and see startups the same way a mobsters sees a restaurant – this is a place to do money laundering, to do financialisation.”

Founders should ask themselves if they like technology, if they like their app, he suggested. And, if so, what’s the difference to them between running that company – or selling it? Because that’s what you do if you take VC money, or float on the stock market. And they’ll force you to take the app you were going to do and pivot, pivot, pivot into some form of exponential surveillance capitalism. And your app dream is gone.

How do you avoid that? Take as little money as possible, was Rushkoff’s suggestion, at as low a valuation as possible. It sounds bad – but you need to pay so much less money back. Can you live with yourself if you only make $10m or $20m? Can you be OK with that?

The Problem with “humane technology”

Rushkoff doesn’t expect the humane technology movement to be the solution, either. In his view, most of the people involved in the movement were also involved in captology – the study of how to addict people to technology. They’re the people who ported the algorithms from Las Vegas slot machines into our smartphones and social media feeds. And now they feel guilty and terrible about it because they’re seeing how they destroyed so many lives, and aided the election of Trump and the victory of Brexit. They were just children working for the man.

So, they now want to turn the technology on its head, and use it to upgrade people, not oppress them,. His problem with that? It’s still coming from the perspective of how technology acts on people, not what people can do with technology. It still feels top-down, elitist and controlling to him. It puts him in mind of “humanely-raised” chicken.

The solution is simplicity

The most advanced co-operative movements come from the inner cities, where no cavalry is coming to rescue them. They get missed by writers who tend towards the costal, the more erudite communities. We need to start taking lessons from these advanced inner-city communities. We need to move away from scale as the solution to everything – it’s part of the problem. Local and diverse solutions create more cultural diversity and resilience. This is reflected by his respect for people like Alicia Garza, one of the founders of the Black Lives Matter movement.

We’re switching from a television media environment to a digital media one, he argued. The television era was global – watching the Berlin Wall fall, watching the moon landing – and that made it a great ideological medium. It’s about fantasy, narratives and storytelling. “When you do ideology on digital, you get the Twitter wars, you get the Facebook silos,” said Rushkoff.

Television was industrial age, but digital is hands-on, maker culture. Your hands have your digits… It’s a more participatory, practical, localised and distributed approach to the world. It looks global, but expressed something very local. Every laptop is a broadcast centre – we’ve distributed content creation.

Television asks us: “what do you believe?”

Digital asks us: “what can you do?”

What does Rushkoff believe will change permanently after the pandemic? He suggested that we’re learning what is really valuable about human contact – and this is especially true in education. Zoom is great in education for transmission of facts – but what’s missing is mimesis. The live encounter with the person is not to get information, but to experience another human being in the process of learning and discovery, he suggested. You watch that process – and imitate it. It’s hard to get that over video.

The subjects we teach are the excuse for children being in school – the real reason is being in a room with a teacher, modelling the process of learning.

We’ve moved from education as a basic human dignity, and a release from work, as purely a preparation for work. Corporations have managed to externalise job training to the public sector, and we’ve allowed that rather than giving children the space and time to grow into thoughtful, thinking human beings.

This is a summary of an interview with Douglas Rushkoff, conducted by David Mattin and Monique van Dusseldorp during the NEXT Show on June 11th 2020. You can catch up with Douglas and his work on his podcast or on his website.