How to deal with ubiquitous technology?

A NEXT18 discussion between Amber Case, Pamela Pavliscak and Monique van Dusseldorp on the emotional and social impact of having our connected technology always with us. In contrast to the big stages of the Schmidts theatres, the Copper House venue housed a small, intimate space, allowing more personal discussions with some of our speakers. Mid-Friday afternoon, there was an interesting discussion about digital tools, social media and its impact on our culture and lives.

The discussion started in territory covered by Pamela’s talk, about emotions, our understanding of them, and our ability to read and manipulate them with machines:

Pamela: We’re paying more attention to the social and regional aspects of emotions . Right now we’re thinking a lot about loneliness as a mental health issue, yet in the 19th century America loneliness was stoicism, and there was a value to it. Our views change over time.

However, our emotions are exposed at scale in a way they never have been before. They can grow out of control. It can be important to carve out space to be alone.

That led to an interesting discussion about the effect of social media on children and teens, and how appropriate it was for them to have access to tools like phones or tablets:

Amber: The original designs for what we know as the iPad was the dynabook, which was eInk based. The light frequency in iPads is really bad for corneal development. When you were bullied 20 years ago, as I was, you could go home and be safe from it. That’s no longer the case; the bullying comes home with you on your device.

Teenagers and young people used to be able to experiment online with you identity – have a fake name for a few years, and play with their sense of who they are. But now everything is tied to your own identity by the big social media services.

Pamela: But people are finding ways around that: there are Instas and Finstas for many teenagers on Instagram – their public identity and their one for their friends. You people also chose their channels carefully. Not facebook, because that’s for grandparents; not Twitter because, as my daughter said, it’s “ambient toxicity”.

Amber: A lot of people don’t have a private space for their thoughts any more. That’s a loss. I had a diary. It’s a great place to dump your difficult thoughts, without putting them in the open straight away.

Social networks have so little friction between your emotions and your ability to share them. People end up posting when they should take a break or have a nap. You almost need a “are you sure you want to post this?” prompt.

She suggested that something like a locked down WordPress.com blog might be the modern solution to that, where all posts are private. 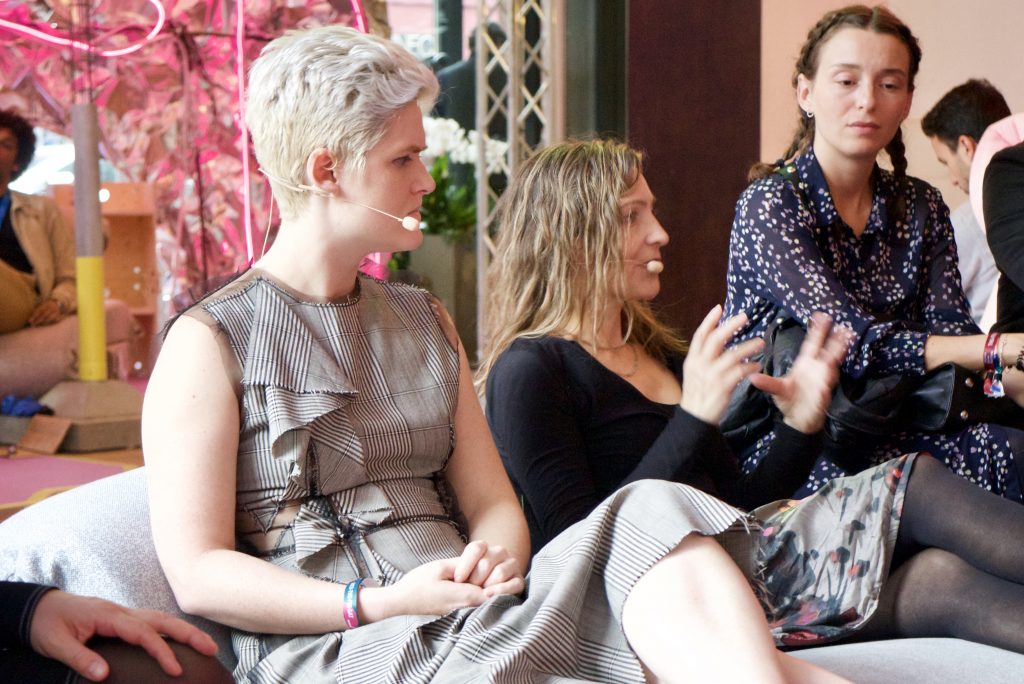 Pamela: Yes. Both. There are ways we could view the technology with more emotional intelligence and learn from that. Machines that recognise emotion are helping us lean about our emotions.

Amber – Whenever you have a phone with you, it can interrupt you at any time. Can we consciously create spaces to not be interrupted? My parents used to stop me reading at the table, for example. That made sure we were all present for mealtimes,

My Dad died last year – and Facebook Memories can be really difficult because of that. They shouldn’t assume, but they shouldn’t unassume either – give people controls over what they see. Facebook now helps you negotiate with your family if you want photos taken down from Facebook, for example.

Pamela: Active emotions spread more easily than passive ones. By designing for engagement, we inadvertently design for anger. Facebook has a history of doing research on emotional contagion. They know this. Could we design for empathy?

Amber: Does empathy scale? You can have a family group chat, sure. That creates a better environment. But if you have 1000 people in a local group, the same social constraints aren’t it place. Do you make people who really care about the community moderators?

And there the discussion wound up, leaving us with some fascinating avenue for exploration: is anyone serious addressing the two major shifts in emotion we are seeing: both its pervasive, in escarole nature though our devices, but also the way it can become contagious and grow to unprecedented scale. How do we restore both calmness and emotional intelligence to the digital landscape?