The pandemic has led to a great restructuring that will affect all aspects of our personal and collective lives. Welcome to the Roarin' Twenties. Every great crisis can be understood in hindsight only. The current one is no exception. The metaphors and labels currently in use all capture only a fraction of the changes: the great pause, the lockdowns, the halt, the reboot, the great reset, the great redesign. In early 2021, however, we can start to separate the immediate effects of the pandemic from its second-order effects. And we can also pull out those pre-existing trends that are now accelerating.

For example, e-commerce jumped ahead at least five years in just a few months. But what’s next? Will we see revenue simply returning to the former trajectory? Not very likely. Will it continue to explode, like it did last year? Or can we expect e-commerce to maintain its long-term growth pattern, just from a higher baseline? 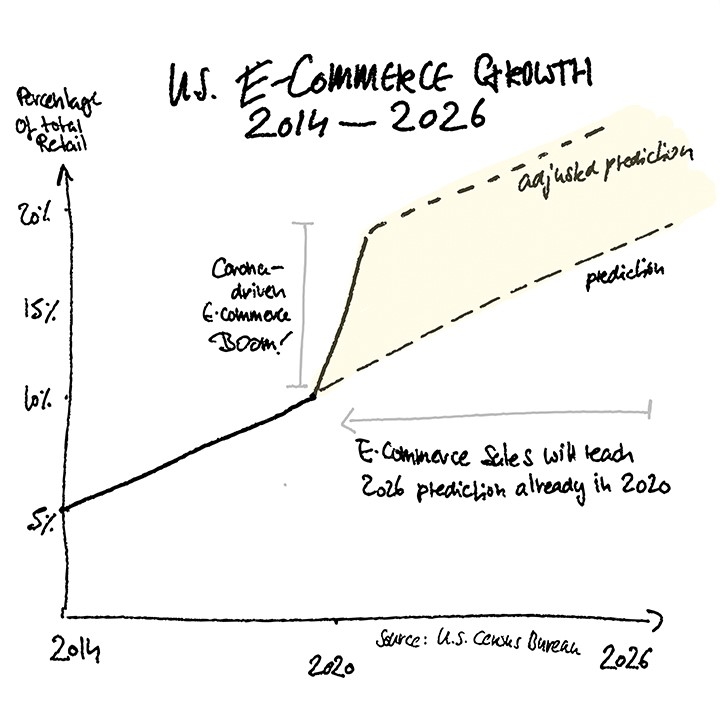 The truth is that we don’t know. But while e-commerce got a considerable boost, this also leads to what I’d like to call the great restructuring. The growth of e-commerce is, at least partially, to the detriment of other retail sectors. And while this has been the case for 25 years, it now has been accelerated, forcing retailers to restructure their operations. The waters have been slowly, but constantly, heated up for many retailers, but now a sudden rise of temperature forces the frog to jump out.

And this means: physical stores will close, city centres will suffer, retail workers will lose their jobs. At the same time, retailers will shift their investments to e-commerce, either expanding their current initiatives, starting new ones, or acquiring e-commerce start-ups to increase their footprint. Consumer expectations have changed, consumer behaviour followed suit, now business models must be adapted. This in turn will further accelerate the restructuring. Case in point: Perfumery chain Douglas is closing more than 20% of its stores, while online revenue is surging.

Of course, retail is only one of several industries where we now see similar patterns of great restructuring. Travel and tourism were badly impacted. Airbnb declared 2021 the year of meaningful travel. Healthcare and education are massively stressed, with high pressure for change. The entire world of work is rapidly evolving. The event industry needs a new business model. Real estate is ripe for a big transformation. The office becomes more of a consumer product. The list goes on.

Business travel may never recover to the 2019 level. Energy emissions may have peaked in 2019 as well. Many companies are reconfiguring their supply chains to increase resilience. The use of technology in general and digitisation in particular have sped up significantly. More specifically: AI is about to scale up, deep learning will take a step toward fully autonomous solutions, and research in quantum computing will accelerate to help with vaccine development. The biotech revolution takes off, with technology like mRNA, giving us the first truly global product: the coronavirus vaccine.

Investment portfolios will be shuffled

And as if all these developments wouldn’t be enough, investment portfolios will be shuffled as well. Investors are always anticipating the future. For example, the carbon bubble is already shrinking. Since March 2020, market volatility has been on a higher level than the average of the past decade. We’re in the midst of a major reassessment of risk. The pandemic has provided an external shock that speeds up the great restructuring of investment portfolios.

Sustainability and green investments are having a moment that’s probably more than a flash in the pan. Green New Deals are springing up everywhere. This is not altruistic at all but in the best interest of businesses and investors. These simply might be good long-term investments. As Kevin Sneader and Shubham Singhal put it:

“It’s possible, albeit speculative, that the COVID-19 crisis foreshadows what a climate crisis could look like: systemic, fast moving, wide ranging, and global. There is a case, then, for businesses to take action to limit their climate risks—for example, by making their capital investments more climate resilient or by diversifying their supply chains.”

Governments stepped in with huge amounts of money to avoid a collapse, but are now facing huge amounts of new debt. However, Modern Monetary Theory (MMT) maintains that this is not a problem since governments can always create as much money as they want. If or when this leads to inflation, governments could simply tax away the surplus of money to dodge inflation. We’ll see if MMT is going to be tried — and tested — in the next few years. There are, nevertheless, striking parallels to the 1920s: after the First World War and the Spanish flu pandemic, hyperinflation hammered Germany. The aftermath is still felt today.

MMT might be the final piece of the puzzle for another related restructuring that is happening to capitalism: with the downfall of neoliberalism, the rise of stakeholder capitalism, the shift to the attention economy, and a growing discussion about post-capitalism. How the next phase or face of capitalism will look like is all but clear. Information technology and the digital revolution, again, play a role here.

The pandemic is a watershed moment, like 1989 and the fall of the Iron Curtain, or the Second World War. It will define future generations. We are entering a new period of rapid change and innovation (which had slowed down for 15 years). It will affect all aspects of our personal and collective lives. We now have a decade to build the future we just got a glimpse of. Welcome to the Roarin’ Twenties. Let’s hope that it won’t end with a Wall Street crash and a depression.

Photo by Victor Garcia on Unsplash